Petra Hielkema, EIOPA’s chairperson since September, has encouraged occupational pension funds to communicate about the possible negative environmental and social impacts of their investments under the EU’s sustainable finance disclosure regulation (SFDR).

Hielkema was speaking during a video address to delegates at IPE’s 2021 conference in Madrid.

One of the key requirements of the SFDR (Article 4) is a statement explaining entities’ approach to investments’ so-called “principal adverse impacts” (PAI) on sustainability factors, which will also need to be backed up with reporting against at least 16 indicators.

Most occupational pension funds in the EU do not have to provide this PAI reporting, however, as there is an exemption for entities with fewer than 500 employees – although those opting out must state that they are doing so and explain why.

Addressing the IPE conference, however, EIOPA’s Hielkema said she would “very much encourage pension funds that are below the threshold to still make an effort to disclose on the principal adverse impacts under the SFDR regime”.

“It would help to enhance the accountability of pension funds as they would be able to show to the public how they engage with investee companies and whether the adverse impact of their investments reduces over time,” she continued.

Pension funds had to provide a PAI or opt-out statement from March this year, as this is when the SFDR entered into force. They also had to classify their pension scheme according to the sustainability-related ambition, with three categories to choose from, known as Article 6, Article 8 (“light green”) and Article 9 (“dark green”). 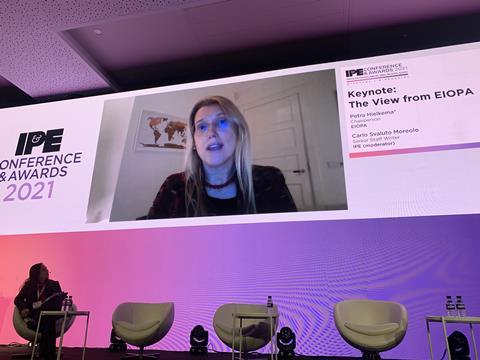 Many pension funds took a cautious approach to these decisions given that the underlying technical compliance rules had not been adopted yet, and only days before Hielkema’s speech it became known that the European Commission was delaying their application date by a further six months.

According to a letter to the European Parliament and the EU Council from the Commission, the live date for the so-called regulated technical standards (RTS) will be 1 January 2023. The Commission had previously indicated that the RTS would apply from 1 July 2022, which was already a delay from 1 January 2022.

Asked about the new deferral of the application date, Hielkema said it was a “logical result”, reflecting the time that EIOPA and the other European supervisory authorities (ESAs) needed to deliver their advice as well as considerations around allowing sufficient time for implementation.

“So yes it was the Commission’s decision but we also welcome it and were informed the decision was made,” she said.

Jaap van Dam of Dutch pension fund KPN told IPE that the SFDR delay is “not unwelcome”. The KPN fund is currently working on a framework to classify all its investments on the basis of ESG and expects to have this finalised by the end of the year.

The fund expects to start reporting about principle adverse impacts of its investments some time next year.

Fellow Dutch pension fund PWRI, which caters for disabled workers, is already reporting on the sustainability characteristics of its investments, according to Xander Den Uyl, who is a trustee at the fund.

“We will take a decision regarding our current opt-out on Article 4 in the first quarter of 2022, and expect to be able to meet the reporting requirements by the end of 2022,” he added.

The Dutch financial market regulator has urged Dutch pension funds to speed up SFDR implementation, although it said that for now compliance will not be rigidly enforced.

At Velliv, head of ESG Thomas Kjærgaard indicated the Danish pension provider was not necessarily pleased about the new RTS delay.

“Maybe it turns out for the better for everybody, but in general we welcome the regulation and rather see a timely implementation,” he told IPE.

The Dutch pension fund association indicated the new delay is due to the fact that the RTS are not expected to be published in the Official Journal of the EU until around April 2022, which would leave too little time for pension funds and other actors in scope of the SFDR to implement the rules as of 1 July 2022.

However, the Commission has not deferred the deadline for the first quantitative PAI reports, which have to be provided by June 2023.

The RTS in question include templates for PAI reporting and for disclosures to shore up a pension scheme’s or other product’s classification as Article 8 or Article 9 under the SFDR, such as by reporting the alignment of investments with economic activities deemed environmentally sustainable under the taxonomy.

Some policy specialists have been wondering if taxonomy product disclosures would be due in January 2023 as per the new application date for the RTS, or January 2022 as this is the date in the taxonomy regulation itself. The same uncertainty prevailed when the RTS application date was July 2022.

Writing on LinkedIn, Victor Hoon, executive director at sustainable investment association Eurosif, said clarity on this, as well as the RTS delay’s implications for new suitability assessment requirements under MiFID II, was necessary.

“Else, the question is whether a delay would reduce the regulatory risk somewhere, but raise it on another component of the SFDR,” he said.