Norway’s sovereign wealth fund, amassed from the Nordic country’s petroleum revenues, has drawn up a formal climate plan including a 2050 target of net zero greenhouse gas emissions for the companies it invests in, following changes to its mandate.

In the wake of debate and expert opinion – notably the Skancke report last summer – the Finance Ministry informed NBIM in June of the changes to its mandate entering force on 12 September 2022.

These include instructions that the fund be based on a long-term net-zero objective for the companies in the portfolio, in line with the Paris Agreement; a general climate-related requirement on the bank’s principles for responsible investment, as well as changes relating to reporting on the bank’s climate work.

Launching its climate action plan, the Oslo-based manager said this morning: “At the heart of our efforts is driving portfolio companies to net zero emissions by 2050 through credible targets and transition plans for reducing their scope 1, scope 2 and material scope 3 emissions”.

Nicolai Tangen, NBIM’s chief executive officer, said: “Our goal is to be the world’s leading investor in terms of how climate risk is managed.

“Our long-term return will depend on how the companies in our portfolio manage the transition to a zero emissions society,” he said.

NBIM said the fund had a clear financial interest in the goals of the Paris Agreement being reached, with its analyses showing that a delayed climate transition constituted the greatest financial risk for the fund. 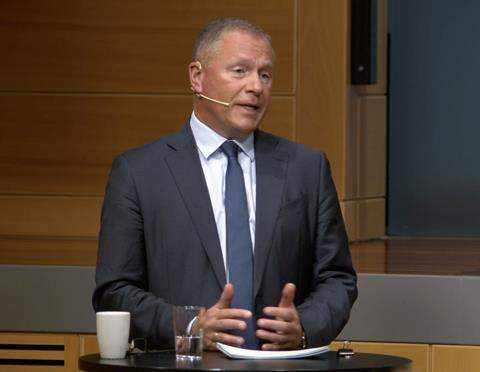 Carine Smith Ihenacho, chief governance and compliance officer at NBIM, told a press conference this morning that the fund had worked with climate on a market, portfolio and societal level for more than 15 years and would now do more – as outlined in the 12-page plan.

NBIM’s leaders stressed divestment was not the organisation’s preferred method of reducing carbon emissions in its portfolio, with Smith Ihenacho telling journalists NBIM wanted to be an owner, a driving force and a support in the climate transition and use the tools it had, namely company dialogue and voting.

“But we are also saying that we can sell out of companies where – despite dialogue – there is no improvement, that they have no climate plan,” she said, adding that divesting was, however, a last resort.

Tangen said: “The simple way to reduce the carbon emissions of the portfolio is to sell out of all companies, but someone has to own those companies, and we think it solves no problems.

“On the contrary, the best way to solve this problem is for these companies to have responsible owners who exert pressure on the companies – selling out does the opposite,” the CEO said.

Separately, the Norwegian government warned this weekend that state spending would be much higher next year in key areas – but that this presented a dilemma because the oil revenue which goes straight into the GPFG now had to be reduced due to the risk of high inflation.

The Finance Ministry said in a press release issued on Sunday: “In 2023, expenditure in the state budget will increase significantly in important areas.

“Although the state will also receive higher income next year, expenses will increase more,” it said.

Overall, the funding need in the state budget for next year would be several tens of billions of kroner, it said, with expenditure growth coming from areas such as national insurance, integration of Ukrainian refugees, and the electricity subsidy scheme.

“This is happening at the same time that the use of oil money must be reduced for economic reasons and the strong rise in prices,” the ministry said, adding that it had chosen to be open about the situation because it wanted a good, informed debate about priorities in the budget.

The state was receiving extraordinary income from oil and gas, it said, which was transferred to the oil fund, and that the Norwegian economy was booming with very low unemployment and unusually high price growth.

“In order to reduce price pressure, the government has been clear that the use of oil money must be reduced in 2023,” it said.

“Despite the extraordinarily high income from the petroleum industry, the gap between the expenditure and income side must therefore be closed in other ways than increased use of oil money,” the ministry said.

Norway’s 2023 national budget is due to be presented by the Labour Party-led government of Prime Minister Jonas Gahr Støre on 6 October.