General partner (GP)-led transactions in private equity could generate $200-300bn per year in a few years, having grown from $2bn in 2013 to around $70bn last year, said Christiaan van der Kam, head of secondaries at Schroder Adveq, the private equity arm of Schroders.

“We are still in the early days of the [secondary] market and we would not be surprised if we see a market of $200-300bn in a couple of years, annually. It is the fastest growing transaction type in secondaries,” he said.

GP-led transactions – meaning GPs selling companies to themselves through a continuation fund – represent more than 50-60% of the market today with sponsors and the assets involved in these types of “high quality” transactions.This is something “entirely new”, van Der Kam added during a presentation at the Alternative Investor Conference organised by the Bundesverband Alternative Investments e.V. earlier this month.

Private equity transactions on the secondary market are not discounted, they are “not clean up exercises that we have seen in the past” van Der Kam said, adding that the majority of deals are single or multi-asset.

The COVID-19 pandemic has accelerated GP-led transactions which in 2020 outpaced limited partner (LP) transactions, with a volume of more than $35bn, according to Schroders.

Despite the current macro economic environment and geopolitical tensions the growth in secondaries transactions continues.

“We are seeing deal flow continue despite what we are seeing in the macro economy. I think March was our strongest month in terms of deal flow,” he noted.

Underwriting a company that a sponsor already owns takes a lot of risks off the table, he added.

Schroders is noting increasing returns on GP-led transactions and lower on LP-led deals. GP-led transactions have a degree of complexity and may take between six to nine months to complete, with multi and single assets continuation funds, van Der Kam said.

Schroders has introduced for these types of deals a complexity premium that is captured in terms of access for investments, skill set, the ability to executive the deal and the speed of execution. 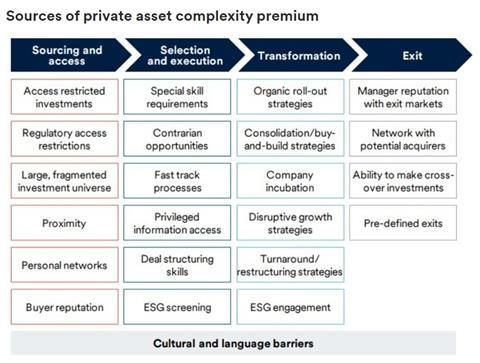 The progress of co and secondary investments

According to Craig MacDonald, managing director at HarbourVest, co-investment is a “dominant asset class” in some markets, for example in Australia, one of the fastest growing pension market globally, he said.

In Australia the pension funds market is regulated in a way that is very cost focused so “they would rather pay for 20 basis points less on fees rather than get 2% more on IRR [Internal Rate of Return],” and therefore co-investiing represents an access point for investments in private equity.

In Europe, Scandinavia is beginning to catch up and the UK market is showing a certain “level of focus on co-investments”, he said.

Despite the challenging year, MacDonald said HarbourVest does not expect a drop in deal flow, which will remain “very consistent” with some GPs anticipating a coming back to market and looking to push to 2023, creating the conditions to extend existing funds.

For Hedward Holdsward, managing director at HarbourVest, capital constrains are particularly relevant for secondaries and co-investments in private equity.

“What we are finding is that the speed at which GPs are coming back to market, LPs are capital constrained, and that is actually driving a number of new transactions in the secondary market,” he said.