The European Central Bank (ECB) has “streamlined” its proposed regulation on statistical reporting requirements for pension funds in response to feedback.

Some pension fund associations had expressed concern about the reporting burden and costs that compliance could entail, in particular given that the European Insurance and Occupational Pensions Authority (EIOPA) was also planning reporting requirements.

The final regulation was adopted by the ECB’s governing body late last month, and published on its website last week. The draft regulation was published and put out for consultation in July.

In a feedback statement published in connection with the final regulation, the ECB said that, from the outset, it paid attention to the issue of containing costs.

“To this end, and taking into account the proportionality principle in particular, the reporting requirements as set out in the initial proposal have been significantly streamlined, especially for smaller pension funds,” it said.

There were four main changes to the initial proposal, according to the ECB.

These included a postponement of the first reporting deadline, a phasing-in period to align the ECB regime with supervisory reporting requirements from EIOPA, and a clarification of the term “pensions funds managers”. 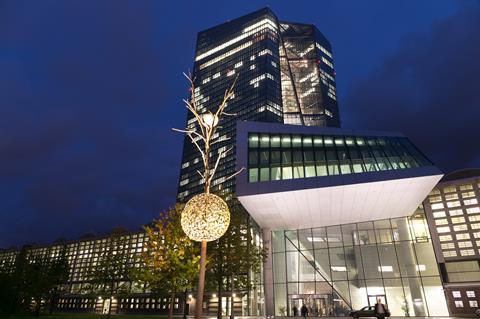 The ECB said it and EIOPA had cooperated closely and had achieved a “very high” level of convergence between the reporting regimes.

“This will allow a single data flow for reporting by the industry, should this be decided at the national level by the respective national central banks and national competent authorities,” said the ECB.

This means that, should a national supervisory authority decide, a pension fund would be able to report one set of data to that authority, a spokesman for the ECB confirmed. The authority would then report to the national central bank, which would pass the data to the ECB.

Germany’s occupational pension fund association, aba, said the ECB had taken on board several of the requests for change made by German pension associations and PensionsEurope.

It said the final regulation was not conclusive about which of Germany’s multiple pension financing vehicles would be subject to the ECB requirements, and that it would be down to the German central bank to make this clear.

The new regulation is binding on euro area countries, but non-euro area EU member states are supposed to implement measures that would allow the collection of statistical information needed to fulfil the ECB’s requirements.

The purpose of the new reporting and data collection regime, according to the ECB, is to “increase the transparency of pension funds for the benefit of their members, the general public and the economy as a whole”.

The new framework would produce enhanced statistics that would “better support the European System of Central Banks in its monetary and financial analyses and its contribution to the stability of the financial system,” it said.