Some asset managers do not invest as responsibly as they claim, a number of Dutch pension funds have said.

None of the participating pension funds, with combined assets under management worth €1.2trn, disagreed with the statement that greenwashing is a problem.

An important reason asset managers are being given the chance to engage in greenwashing is a lack of commonly agreed environmental, social, and corporate governance (ESG) standards, many pension funds believed.

Some 56% of respondents even saw the absence of a common ESG definition as a threat to responsible investing, the survey found.

Responsible investing is a rising trend in the Dutch pension sector, with 87% of the surveyed funds now having their own sustainable investment policy. The remaining 13% have outsourced this to their fiduciary manager.

None of the surveyed funds said they have no dedicated policy for responsible investing.

Negative selection, where certain companies or sectors such as oil and gas or weapons are being excluded, is the most common ESG instrument, with 90% of the surveyed funds applying it (see chart). 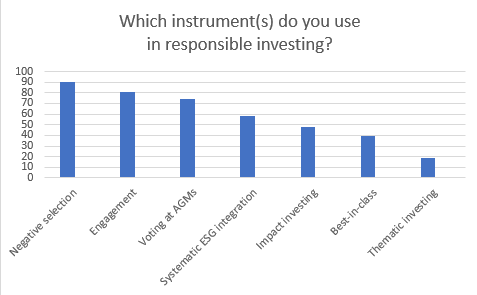 Exactly half of the pension funds in the survey have said they believe scheme members are interested in responsible investing, while 20% think members do not actually care that much.

Less than one in five funds, however, are prepared to sacrifice some of their returns in exchange for investing more responsibly. A quarter of the funds surveyed refused to compromise on returns, with another 29% being hesitant to do so.

The survey also revealed a sceptical attitude among some pension funds versus investing in oil and gas companies. More than 35% of funds believed investing in fossil fuels was “irresponsible” because of the risk of ending up with stranded assets.

An almost equal number of funds, however, didn’t consider this a problem with the remaining third being neutral.