Data shows there is a strong link between investment risk and underfunding in defined benefit (DB) schemes, the UK’s lifeboat fund for bankrupt company pension schemes has said.

According to the Pension Protection Fund’s Purple Book, published today, as at the end of March 2019 there were 57% of schemes in deficit, with an aggregate deficit of £160bn (€177bn) on a section 179 basis – where liability values are measured in terms of the cost of insuring schemes to pay PPF levels of compensation.

Although an overall trend for de-risking had continued, underfunded schemes tended to have more exposure to equities than overfunded schemes. The latter had on average 69% of their assets in bonds, compared with just 25% for schemes with a funding ratio below 50%.

“Although the PPF is much better equipped to manage that risk than we have ever been – our own funding ratio is stable, we have years of experience under our belt and we have a healthy reserve to fund future claims – the potential claims of underfunded schemes pose a significant risk, which is beyond our control.”

Lisa McCrory, the PPF’s chief actuary, added: “The long tail of small, underfunded schemes is a particular concern: 58% of schemes with 100-999 members are less than 75% funded.” 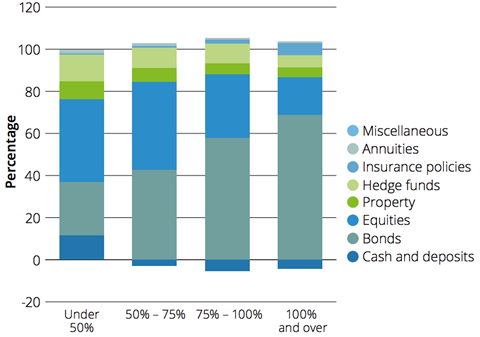 TPR is due to launch a consultation on its new funding code in March, with trustees and employers expected to face tougher demands under the new framework.

Susan McIlvogue, head of DB at Hymans Robertson, said that in revealing that a significant number of schemes remain underfunded, the Purple Book “provides a vital reminder that many schemes must act now to avoid being caught unprepared by a revitalised regulator and new funding code”.

The PPF said the new funding framework had the potential to significantly change the risks to which it was exposed.

The data for the Purple Book, which provides the most comprehensive data on the UK universe of DB schemes in the private sector, also showed that the funding ratio for all schemes improved since 2006, from 97.1% to 99.2%. Scheme funding worsened compared with the situation as at 31 March 2018, however, when it stood at 95.7%.

The universe of DB schemes continued to shrink, this year by 88 schemes to 5,436. The PPF said this reflected schemes winding up, merging, and entering PPF assessment.

As concerns the risks the PPF faces, the Purple Book repeats information from last year’s annual report, namely that as at 31 March 2019 the lifeboat fund had an 89% chance of hitting its target to be financially self-sufficient by the funding horizon, currently estimated to be 2030.

In the new Purple Book, the PPF said it was reviewing the design of the model it uses to inform its understanding of the funding risks it faces and monitor progress against its funding objective.