Eighty-eight per cent of eligible employees were participating in a workplace pension in the UK last year, according to official statistics released today.

This marks a steady increase since 2012, when automatic enrolment was introduced, until 2018, with the government saying most groups had seen trends in participation stabilise between 2018 and 2020.

Total annual savings for eligible savers increased to £105.9bn in 2020, acording to the statistics. Pension contribution rates fell in the first half of 2020 in the face of the coronavirus pandemic, but recovered in the second half of the year.

The roll-out of auto-enrolment was completed following implementation of the contribution increase in April 2019.

The government said many gaps had narrowed since 2012, but that some remained in 2020 “and there is relatively low participation of below 65% for some eligible groups including micro employers and Pakistani and Bangladeshi employees”.

At Hargreaves Landsdown, senior pensions and retirement analyst Helen Morrissey also flagged a long-term decline in participation among the self-employed, from 31% in 2009/10 to 16% in 2019/20.

“The evidence points to the enormous impact that auto-enrolment has had on the nation’s pension savings behaviour over the past decade,” she said. “The participation of under-represented groups such as lower earners and younger age groups has been boosted massively. However, gaps clearly remain.

“The self-employed are out of scope and falling further behind and while the participation of Pakistani and Bangladeshi people has grown, they are still playing catch up,” added Morrissey.

“In short, the pension system needs a drastic overhaul,” he said. “It is still biased towards men and has not evolved with society, so for people outside the nuclear family especially – with one breadwinner, and no divorce – the system just doesn’t work.

“We need to introduce better tools such as higher default contribution rates, and better use of a wide range of investment assets.”

The minimum auto-enrolment contribution is 8% of salary with employers paying at least 3% and the employee the remainder. Auto-enrolment applies to workers aged 22 or over. 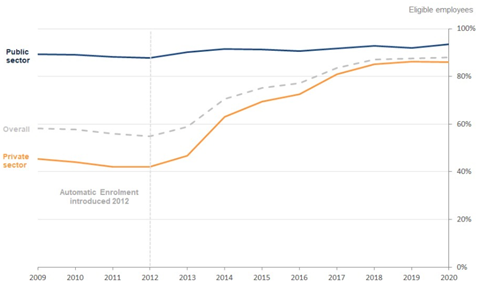 The full statistics can be found here.