The UN secretary general António Guterres has launched the high-level expert group he promised at the COP26 climate change conference in Glasgow to scrutinise and help ensure the robustness of net-zero pledges made by the private sector and other non-state entities.

The group, which will be chaired by Catherine McKenna, former Canadian minister of environment and climate change, is to report back to Guterres with its findings and recommendations within nine to 12 months of its first meeting.

“The recent avalanche of net-zero pledges by businesses, investors, cities and regions will be vital to keep 1.5°C alive and to build towards a safe and healthy planet, but only if all pledges have transparent plans, robust near-term action, and are implemented in full,” McKenna said.

Announcing the launch of the UN expert group, Guterres said governments had the lion’s share of responsibility to achieve net-zero emissions by mid-century, but “we also urgently need every business, investor, city, state and region to walk the talk on their net-zero promises”.

“To avert a climate catastrophe, we need bold pledges matched by concrete action,” said Guterres. “Tougher net-zero standards and strengthened accountability around the implementation of these commitments can deliver real and immediate emissions cuts.”

At COP26, secretary general Guterres had at the start of negotiations told delegates there was “a deficit of credibility and a surplus of confusion over emissions reductions and net-zero targets, with different meanings and different metrics”. 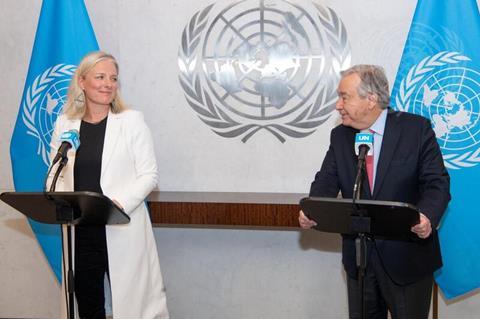 Secretary-General António Guterres (right) launches the Expert Group on Net-Zero Commitments. On the left is Catherine McKenna, chair of the group.

His comments came ahead of the first ‘Finance Day’ at a UN climate change conference, featuring Mark Carney and the Glasgow Financial Alliance for Net Zero (GFANZ) in addition to a speech from UK chancellor Rishi Sunak setting out the UK’s plans to become the first ‘net-zero aligned financial centre’.

Asset Owner Alliance’s Thallinger on board

According to the UN expert group’s terms of reference, it will assess current standards and definitions for setting net-zero targets by non-state actors and, if these are deemed inadequate, recommend additional elements to enhance them.

It will also develop recommendations on credibility criteria used to assess the stated objectives, measurement and reporting of net-zero pledges by non-state actors.

Another job wll be to develop recommendations regarding processes for the international community to verify and account in a transparent manner non-state actors’ progress towards meeting their net-zero commitments and the fulfilment of their reported decarbonisation plans, including any reliance on carbon dioxide removal and offsets.

It is also expected to come up with recommendations on a roadmap to translate these standards and criteria into international and national level regulations, in the context of a just transition.

The terms of reference for the group also indicate that it will consider, to the extent possible, methodologies for assessing the aggregate impact and comparability of non-state actor efforts, including to potentially serve as an input into the UN Framework Convention on Climate Change’s stocktake of international climate efforts in 2023 and beyond.

The UN net-zero expert group so far comprises 16 individuals. From the finance sector there is Günther Thallinger, member of the board of Allianz Group and chair of the insurer’s ESG board as well as chair of the UN-convened Net-Zero Asset Owners Alliance. Guterres has previously described the Alliance as the “gold standard for credible commitments and transparent targets”.

Helena Viñes Fiestas, previously a senior sustainable finance expert at BNP Paribas and now Commissioner of the Spanish Financial Markets Authority, is also a member of the UN net-zero expert group. She is also a rapporteur of the European Commission’s Platform on Sustainable Finance.

The full list of members of the ‘High-Level Expert Group on the Net-Zero Emissions Commitments of Non-State Entities’ can be found here.