USS to stay the course with 2020 valuation despite funding stresses

The Universities Superannuation Scheme (USS) has decided to proceed as planned with its 2020 valuation at 31 March despite the significant impact current market conditions are having on its funding position.

USS chief executive officer Bill Galvin relayed the decision to the heads of participating higher education institutions in an update earlier this week.

“This will allow us to properly consider the support available to the scheme from sponsoring employers in the long and short term,” he said.

“We can also re-assess the appropriateness of the funding assumptions used in the 2018 valuation, including the outlook for future investment returns and the contribution increases scheduled for October 2021.”

The legal deadline for the 2020 valuation with a 31 March strike date is 30 June 2021, meaning that USS will have time to take into account what happens in financial markets and the higher education sector over the coming 15 months.

The timeline would give USS three months to work with its more than 300 participating employers to implement any changes before contribution increases scheduled from October 2021 under the 2018 valuation otherwise come into effect.

Since the beginning of March, amid financial markets turmoil surrounding the coronavirus crisis, the value of USS’s assets has fallen from £74bn (€82bn) to as low as £64.3bn as at 18 March.

Its funding position has been very volatile, with the deficit on a technical provisions basis in respect of past service benefits increasing from the £3.6bn under the 2018 valuation to more than £11bn in recent days.

Earlier this month USS breached a self-sufficiency deficit monitoring threshold for more than five business days, an event it had to report to the regulator and that obliged the trustee board to meet to consider what the appropriate response should be.

The outcome of that meeting, held on 26 March, was to proceed with the valuation at 31 March 2020, meaning the scheme does not have to take more immediate action.

“We believe this is beneficial for employers navigating current difficulties and avoids short-term actions that could have much broader consequences for the sector,” Galvin told sponsoring employers. 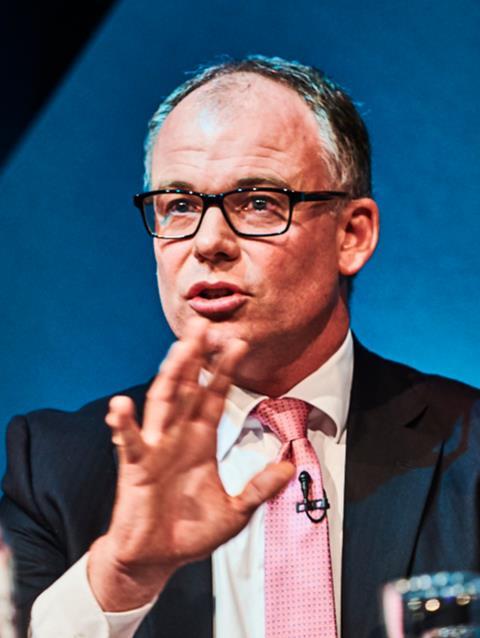 “We are facing extremely difficult short-term conditions. But rest assured that any decisions we take through this period will be consistent with our long-term strategy and our legal, regulatory and fiduciary duties: to ensure members’ benefits that have been promised are secure and will be paid when due, and to protect the sustainability of the scheme.”

Besides sticking with the valuation as planned, the potential options available to USS under its funding monitoring framework – approved by the regulator – were an accelerated valuation, higher contributions, rapidly de-risking of investments, or a combination of these measures.

Speaking to journalists yesterday, Galvin indicated that if USS weren’t already about to embark on a valuation, its breaching a funding monitoring threshold from the past valuation would have prompted the scheme to ask itself if it ought to call a valuation to “look at the circumstances in which we find ourselves from first principles”.

The CEO emphasised the importance of USS knowing how much it can rely on the higher education institutions participating in the scheme, saying the nature of their commitment had a significant bearing on the level of risk the trustees would feel able to take in funding benefits going forward.

In his update to the heads of sponsoring employers, Galvin said the current conditions and stresses on the scheme’s funding position illustrated “starkly” the need for a permanent rule change on employer exits from the scheme.

This is one of the additional commitments USS has flagged to employers as being necessary if the pension fund is to continue to take a long-term view and assess the reliance on sponsoring employers over a covenant horizon of 30 years or more.

“Without a rule change, we will need to reduce our appetite for investment risk,” said Galvin. “This will have a material impact on the valuation outcome.

“This was a critical factor in concluding the 2018 valuation and is the most important issue for us in carrying out the 2020 valuation.”