On Saturday, the UN climate change summit in Glasgow came to an end with nearly 200 countries agreeing what has been dubbed the Glasgow Climate Pact, with negotiators also managing to finalise outstanding elements of the Paris Agreement. Reactions are flowing in, from suggestions for investors to scan portfolios for transition risks to their maybe needing to pay more attention to physical risks.

At Robeco, climate strategist Lucian Peppelenbos said he thinks COP26 will be remembered for three things: the focus on policy action this decade, with deals for example on deforestation and methane emissions; the unprecedented private sector participation; and the agreement on the rulebook to implement the Paris accord.

The latter includes the much talked about Article 6, which governs how countries can achieve their climate pledges by purchasing carbon credits through emissions reductions generated by others.

Peppelenbos said agreement on carbon markets was for him “the big surprise of Glasgow”.

“The fact that they agreed on the carbon markets means that carbon will be able to be traded internationally like it’s already done in Europe, it will get a better price, real value, which will trigger investments, innovations in low carbon technology,” he said. This outcome of COP26 was a “green score” for him.

Tom Evans, policy adviser at climate change think tank E3G, said finalising the guidelines for how the Paris Agreement is delivered marked “the beginning of a new era for moving away from negotiating the technicalities, towards delivering countries’ commitments”.

“However, the rules agreed at COP26 are far from perfect with some major loopholes on timeframes for countries’ climate targets and especially for carbon markets,” he said.

“If exploited, they could seriously undermine efforts to reduce emissions. Governments must avoid this temptation, uphold strict standards, and stay faithful to the ambition of the Glasgow Climate Pact which gives us the hope of keeping 1.5°C alive.” 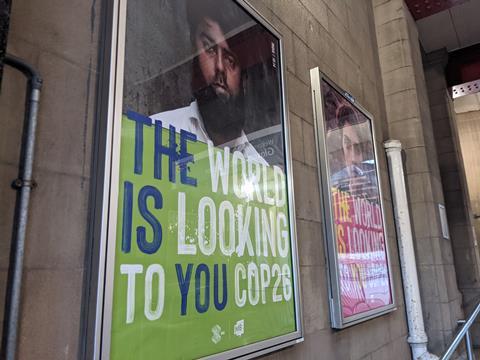 Commenting on the final deal reached in Glasgow, Chris Dodwell, head of policy and advocacy at Impax Asset Management, said he saw the glass half full, pointing to developments such as India setting a target to reach net-zero emissions by 2070, the “coalitions of the willing” that have been formed on issues such as coal, nature, transport and methane, and the announcement of the International Sustainability Standards Board.

He played down the importance of the outcome of Article 6 negotiations on carbon trading, saying that the first step towards a global carbon price should be to increase the number of countries with effective carbon pricing systems.

However, he welcomed the agreement to increase the ambition of nationally determined contributions (NDCs) before the next COP in Egypt in order to close the gap to 1.5°C, emphasising the need for this work to be undertaken in parallel with immediate efforts to implement existing plans and the new sectoral pledges made in Glasgow.

Impax is a member of the Natural Capital Investment Alliance and one of some 30 financial organisation signatories to a deforestation commitment that was announced in tandem with the “Glasgow Leaders’ Declaration on Forest and Land Use” in the early days of COP26.

“All in all, COP26 probably ends up better than what could have been feared, but we expect another moment of tension next year around the new pledges”

At AXA Investment Managers, group chief economist Gilles Moëc said that as things stood today, there were few “hard takeaways” for the private sector from COP26, apart from the methane deal that was going to have immediate consequences for the oil and gas industry.

Methane was the focus of one of the “coalitions of the willing” that were created at COP26. It was led by the EU and the US and supported by more than 100 countries, although they can join without making any disclosure on how they intend to reach the targeted 30% reduction in emissions of the gas from human activity between 2020 and 2030.

“All in all, COP26 probably ends up better than what could have been feared, but we expect another moment of tension next year around the new pledges,” wrote Moëc in a note this morning. “We continue to think that attention is now likely to shift away from these ‘big moments’ focused on pledges towards monitoring implementation at the national level.”

At consultancy LCP, partner Dan Mikulskis’ take on COP26 was that “governments have signalled possibly the largest, and fastest shift of capital that any of us will see in our lifetime as the global economy’s capital stock is turned over to align with renewable energy”.

Investors needed to factor this huge flow of capital into their allocation decisions, he said, adding that the message from several quarters at COP26 was that the investment case for fossil fuels and high-emitting infrastructure is rapidly collapsing.

“Some of this has already been anticipated by markets and investors, but this is still something that investors should pay attention to,” Mikulskis said. “Investors should scan their portfolios for transition risks posed by fossil fuels and high emitting infrastructure.”

The Association of Consulting Actuaries (ACA) in the UK today reported that four in 10 pension schemes in the country had yet to consider climate risk targets, saying that it expected the momentum and profile of COP26 would help the majority of schemes put climate targets in place in the next few years.

“I’m hugely optimistic that the influence of COP26 and government regulation has taken us past a point of no return,” said Patrick Bloomfield, chair of the ACA.

At investment bank Morgan Stanley, strategists suggested investors may need to increasingly focus on the physical risks of climate change, for example the impact of extreme weather on agriculture, infrastructure and productivity.

They said this because of the analysis that has been done showing that the various packages of climate commitments do not point to keeping global warming to 1.5°C above pre-industrial temperatures.

During the first week of the UN climate change summit, the International Energy Agency published commentary showing that if all the climate pledges made by countries as of 3 November, covering methane as well as carbon emissions, were to be met in full and on time, the rise in global temperatures this century could be limited to 1.8°C.

According to modelling by Climate Action Tracker, meanwhile, considering only 2030 pledges, global temperatures are on track to rise by 2.4°C by the end of the century. The non-profit research group’s projected warming from all net-zero announcements, if fully implemented, is down to 1.8°C by 2100.

“What’s clear is that while some strong action has been taken, we are still emphatically not on the path to 1.5°C,” said Edward Baker, head of climate policy at the Principles for Responsible Investment (PRI). “In short, the global policy response needs to be stronger, with a particular focus on setting near-term targets and ensuring that governments keep themselves accountable to hitting these.”

This COP was the first UN climate change summit to feature a day dedicated to finance, at which Mark Carney announced that more than $130trn of private capital was committed to transforming the economy for net-zero emissions as part of the Glasgow Financial Alliance for Net Zero. Critics said the figure included double-counting and that GFANZ members needed to take tougher action over climate change.

At an event on Friday afternoon, while negotiators were still wrangling, Johanna Köb, head of responsible investment at Zurich Insurance, acknowledged that the $130trn figure included some double-counting and that there were still many financial institutions that had not made such a pledge, but she said it showed “the sector is there to show up”.

At the PRI, Sagarika Chatterjee, director of climate at the PRI, said that with GFANZ, organisations at every stage of the investment process had access to an initiative designed to help them reach net-zero, and that the structure that GFANZ provided was the most effective way of getting firms to act together to reach net-zero. 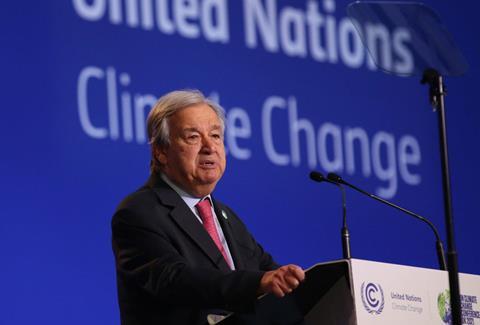 Speaking last Thursday, UN secretary general Antonio Guterres said GFANZ should follow the path of the Net-Zero Asset Owners Alliance, which he has described as “the gold standard”.

Elaborating on his plans for an expert group to propose clear standards to measure and analyse net-zero commitments from non-state actors, he said the group would submit a series of recommendations to him during the course of next year.

“They will work in a transparent and inclusive manner, and I invite you all to cooperate fully in their establishment and then with them,” he said. “We need action if commitments are to pass the credibility test.”