Hybrids have taken off because they marry the current needs of both issuers and fixed-income investors. David Turner looks at how this sweet deal could go sour

In investment, as in everyday life and blockbuster novels and movies, many people like to spice up the humdrum with a touch of exotic adventure, but only if this adventure comes within certain highly circumscribed limits.

Many portfolio managers think that Europe’s non-financial hybrid bonds – subordinated paper on which coupon payments can be stopped relatively easily – fit the bill. Hybrids are judged by rating agencies to be 50% debt and 50% equity, because of their contingent equity characteristics: €1bn extra in hybrid debt counts only as €500m when rating agencies assess the overall leverage of a company in order to rate its senior debt. Because preserving the ratings of this senior debt is a high priority for companies, it can be preferable for them to add to their gearing through hybrid instruments.

“In general, we like them as an asset class,” says Andreas Michalitsianos, executive director and portfolio manager in European investment grade corporate credit at JP Morgan Asset Management. “For the investment-grade ones in particular, the return per unit of risk is attractive.”

This point is echoed by Amandeep Mahal, a member of the credit research team at Henderson Global Investors, which bought hybrid debt issued by Orange last year and by Total in February: “They offer a very good risk-reward ratio,” he says.

• European issuance of non-financial hybrid bonds has soared since 2013.
• Many investment managers think the risk-reward ratio is attractive.
• Hybrid issuers can decline to pay the coupon at any time, but investors downplay this risk.
• Investors do worry that hybrids might be called early should rating agencies change the way they categorise hybrid debt.
• And a sudden change in hybrid issuers’ behaviour could quickly make the entire hybrid sector much riskier.

However, even some portfolio managers who are willing to buy non-financial hybrids still warn that a radical change in the operating environment of a company, sector or asset class could suddenly ramp up the risk.

Demand
After dying down in the wake of the credit crunch, supply soared in 2013 – rising almost fivefold on 2012 to $37bn, before increasing yet further to $46bn in 2014, according to Dealogic. Much of the issuance is from utility companies, but many companies in other sectors also issue, often to fund acquisitions. For example, the €2.8bn Orange issue helped financed the acquisition of Spanish broadband operator Jazztel. 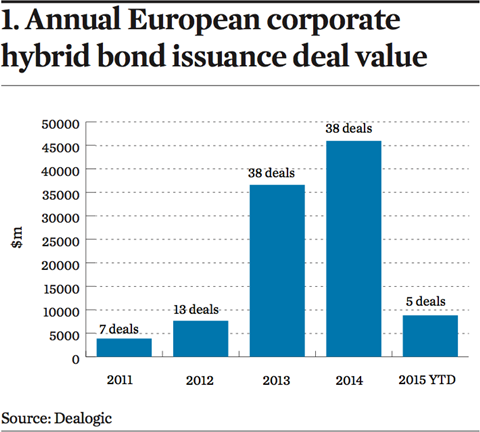 High demand from yield-starved investors – boosted by the fact that they are deemed sufficiently mainstream to be included in standard bond indices – has absorbed this issuance comfortably. A typical BBB-rated issue yields 200-250 basis points above the risk-free rate and 150-200 basis points above the same issuer’s senior paper, which is typically rated two notches higher by rating agencies.

“They are becoming much more interesting again because we are in a low-yielding environment,” says Anke Richter, a credit analyst at Conning. For investors expecting yields to fall even lower, their high beta to the market makes them all the more attractive. “If markets move, these sorts of subordinated instruments move more,” she adds.

Some of this spread above senior debt comes from the subordination, but investors say that most is compensation for the special characteristics peculiar to non-financial hybrids.

In return for these high spreads, investors must accept the risk that the issuer will not pay the coupon – which they are free to do at will. They must also fret about the possibility that the issuer will call the paper at par value or 101 before the normal date of call – most commonly between five and 10 years from issuance. The issuer is usually entitled to do this under a fairly standardised set of rules.

In practice, issuers have not called the debt early unless one specific thing has happened – a change in rating agency methodology that cancels the debt’s hybrid status.

Issuers can also choose, conversely, not to call the bonds at the normal date – leaving them as perpetual bonds until the issuer decides otherwise. If the issuer does this, the bond’s coupon is reset to reflect current market rates, but with the addition of a ‘step-up’ penalty – initially 25 basis points in most cases, rising to 100 basis points at a later point. For debt currently issued, however, if the bond is not called, it is from then on treated as 100% debt by agencies, rather than as a hybrid.

Despite this complex web of risks, managers note that they are considerably less risky than the $90bn of outstanding contingent convertible debt – or ‘CoCos’ issued by European banks. In the case of most bank CoCos, the principal is written down, either temporarily or permanently, if the bank’s ratio of capital to risk-weighted assets drops below the minimum demanded by the regulator.

Because of this much greater risk of outright catastrophe than for non-financial hybrids – whose principal is written down only if the company goes bust – bank CoCos generally have high-yield ratings, and offer yield levels of 7.5% or more for banks that are far from distressed.

Threat
The threat of non-payment of coupons on non-financial hybrids is downplayed by most investors, despite the fact that it can, in strict legal terms, be done at any time.

“The likelihood of not paying a coupon is extremely improbable,” says Mahal at Henderson. “In the time I’ve been covering hybrids – since 2010 – I haven’t seen any.”

This is partly because of the ‘dividend stopper’ rule attached to hybrids. If issuers do not pay a coupon on the hybrid, they are not allowed to pay a dividend to stockholders either. Moreover, Mahal notes that hybrid debt issuers are also under immense pressure to pay the coupons because of the huge senior debt they have. 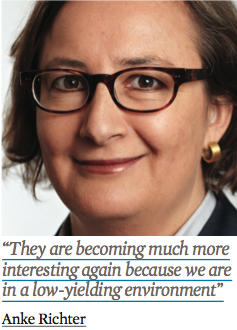 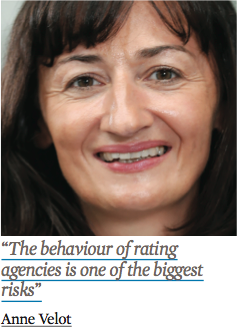 By contrast, the prospect of a change in ratings methodology with regard to hybrid instruments does cause real anxiety among investors.

“The behaviour of rating agencies is one of the biggest risks,” says Anne Velot, head of euro credit at AXA Investment Managers.

Analysts can recall a number of cases in recent years where issuers called the bonds early because of a change in agency methodology. Mahal cites ArcelorMittal, which in September 2012 issued $650m of hybrid debt when its senior debt was investment-grade. However, in 2013 Moody’s changed its rules to specify that if an issuer’s senior debt had high-yield status, the equity credit on its hybrids would be lost. This applied to ArcelorMittal, which had been downgraded to junk in November 2012, so in 2014 it called the $650m debt at a price of 101, much lower than the market price of 109. Other issuers that have called early include Telecom Italia and Danish oil and gas company Dong Energy.

That move by Moody’s has concentrated investors’ minds. Asked about the risk of hybrid debt being called early by issuers in the future because changes in rating agency methodology end their hybrid status, Robert Emes, a credit analyst at JPMAM specialising in European utilities, says: “I think there’s a very real risk.” He adds: “While not all changes will cause an issuer to redeem early, the agencies will constantly try to reform their methodologies to make them more indicative of the risks that they see, so I can’t rule out that this might happen.”

Analysts also warn of the opposite risk – that the bond might not be called at the scheduled time, leaving the investor holding on to debt that they had not bargained for. This might be because the issuer’s financial situation has deteriorated to the point where it would find it hard to replace the hybrid debt with a new issue. German sugar producer Suedzucker announced last year, during a period of financial difficulty, that it was unlikely to call its €700m issue in June 2015, as expected. 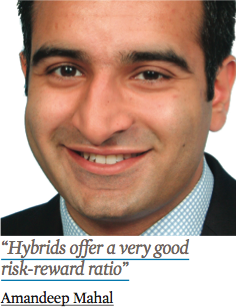 Julian Marks, portfolio manager in non-US credit at Neuberger Berman, thinks that the risk of such nasty surprises can be mitigated by gauging management’s long-term thinking.

“The ideal corporate situation is that you get a reasonable spread, but business risk is low and management is extremely conservative, looking to deleverage the company and to pay a reasonable dividend,” he says. “One wants to avoid

situations where other management teams might be looking to gear up the capital structure and enter riskier business areas, and have an investor base that isn’t that concerned about the dividends.”

Marks still invests, and in many portfolios runs a slight overweight, in non-financial hybrids, but even he warns of the risk of a total overturn in the status quo, which might change all expectations about hybrids. He cites the subordinated lower tier-2 bonds, callable after five years, issued by banks before the credit crisis. 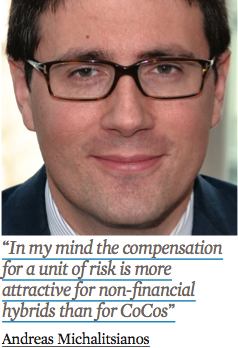 “For reputational reasons, these were always called, and they were always priced to call, but during the credit crisis some decided not to call,” he says, recalling the shock when Deutsche Bank opted not to do so. “Suddenly this was a major risk.”

Although his example refers to banks, Marks thinks corporates could behave similarly with their hybrid bonds if put in a tight spot. And, he warns: “Once some management team breaks this taboo it’s possible that others feel it’s no big deal to do the same thing.”

Right now, in other words, these instruments meet the needs of both issuers (to take on debt without hurting their precious credit ratings) and investors (to get extra yield from highly-rated borrowers). But that could change very quickly indeed should things turn bad enough that they are called upon to perform exactly the role for which they were designed – to be perpetual, loss-absorbing capital.