4
Norway: Paving the way for competition

Norway: Paving the way for competition

The fruition of two long-running Norwegian projects has created an environment in the country’s municipal pensions market where competition may finally be able to thrive.

Local authority divisions have been rethought over the past few years in the far-reaching municipal reform, creating some larger local councils and thereby expanding the coverage of a few existing single-municipality pension funds.

And in April, the government finally published a draft law for the new public-sector pension scheme, following years of consultations and negotiations which, as a hybrid arrangement, has much lower barriers to entry for potential new providers than does the existing defined-benefit (DB) scheme.

Norwegian financial groups DNB and Storebrand have already announced their intention to return to the business of public-sector pensions provision, which they both abandoned in 2012, leaving the main player Kommunal Landspensjonskasse (KLP) with a near monopoly in the market – except for the few local councils that were running their own schemes.

But while the path might appear to have opened up for a new era of healthy competition – accompanied by the potential benefits of improved costs and service – there are still some thorns that need to be removed.

The municipal reform in Norway, which began in 2014 as a project of Prime Minister Erna Solberg’s government, involves more than a quarter of the country’s original 428 municipalities. They are merging to create 47 new, enlarged local authorities, bringing the total number of authorities down to 356 by 2020.

Last year, the three municipalities of Sandefjord, Stokke and Andebu merged and amalgamated their pension schemes in the Sandefjord pension fund.

It has also been decided that a further six municipal pension funds will have additional municipalities merged into them as clients by January 2020. These are Asker, Drammen, Lørenskog, Trondheim, Sandnes and Molde.

The new Viken Pension Fund, which will be a direct continuation of AFPK and BFKP, will manage around NOK6.8bn (€705m), taking NOK1.25bn away from the KLP.

Espen Kløw, secretary general of the Norwegian Association of Pension Funds, says the industry group is pleased that Viken has decided to merge their pension schemes. “We are convinced this will be a good solution and in the long term will give lower pension costs for the Viken region,” he says.

While the enlarged pension funds in Norway will in themselves go some way to distributing public-sector pensions management more broadly between providers, the return of commercial players DNB and Storebrand, and the potential first-time entry of other providers could add another powerful layer of competition.

But even though the newly-agreed hybrid public sector pension could create an attractive market for new entrants, DNB and Storebrand have been lobbying for additional changes to ensure that such private players get a workable way in.

The new public-sector pension has been developed to meet several goals, with government aiming for a more sustainable pension scheme that encourages employees to stay in work for longer – while still accommodating those who need to retire early.

The new scheme also aims to make it easier for workers in the public sector to switch to jobs in the private sector, without having a negative impact on their future retirement in years to come.

Taking effect from January 2020, it is based on a hybrid benefits structure and will run alongside the existing DB scheme for many years, until the earlier cohorts retire.

Anders Skjævestad, chief executive of DNB Liv says part of the reason KLP has a monopoly is because the municipalities do not see themselves obliged to put their pension contracts out for tender on a regular basis. 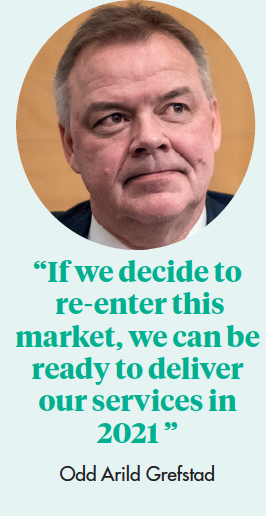 Because of this, he says DNB has asked the authorities to consider measures to stimulate competition in this market in connection with the introduction of new public service pensions.

There are no guidelines in the bill itself related to the competition in the market, he says, adding that the ministry is “content to assume that the municipalities themselves choose their pension provider within the framework of the main tariff agreement and the procurement regulations”.

He adds: “It will therefore now be up to the parties in the tariff settlement to decide on tender practices.”

With the new scheme, he continuess, preconditions for public occupational pensions have changed, and the pension provider is “a firm believer” that mandatory tendering will create a fair marketplace, which does not exist today.

“In addition the pension providers must be able to choose if they want to compete only within the new scheme, as the old scheme will have entry barriers that will be anti-competitive,” he says.

“The problem was never that DNB couldn’t compete, but since several municipalities did not practice tendering, we were never allowed to enter the competition.

“As one of the largest pension providers in Norway we have cost-effective pension solutions and online tools that will make it easy to manage the pension scheme.

“We feel certain that we will be a strong player in this marketplace, and a competition between pension providers will be beneficial for everyone,” Skjævestad says.

However, KLP emphasises that there was genuine competition in the sector until seven years ago. “Our competitors had a third of the market when they withdrew from the market in 2012, leaving it to us to take care of clients that needed someone to manage their pension schemes,” says Sverre Thornes, KLP’s chief executive, adding that his company will continue to do its best to prove that it is a good provider for its clients in the future too.

He says KLP performed well in competition before and has improved its service. He also warns that it will be hard for other providers to offer the old pension scheme for municipalities.

“In a low-interest environment, it is demanding to offer the required annual interest-rate guarantee of 2.5%. To have a competitive allocation to equities we have built up our buffer capital. This will be a challenge to our competitors who will have to expose their own equity capital in order to hold the same amount allocated to equities,” says Thornes, predicting that this will probably stress their solvency position.

“We look forward to see their value proposition to potential clients,” he says.

Although keen, Storebrand has yet to decide whether it will become a provider of municipal pensions in Norway once more.

The company’s chief executive Odd Arild Grefstad says the final decision will rest on whether or not his company believes a more competitive market truly exists, allowing for competition between KLP and challengers such as Storebrand.

“If we decide to re-enter this market, we can be ready to deliver our services in 2021,” Grefstad says.

“We appreciate the constructive dialogue we are having with the Norwegian Competition Authority, representatives from the municipalities, independent advisers, political decision makers and other stakeholders regarding conditions for re-entry.”

Storebrand emphasises that it wants to deliver a complete solution, including both the DB scheme, which will eventually run off, and the new hybrid-based scheme.

Grefstad says the reform could be good for competition, but that the advent of the new pension scheme will be a bigger driver.

“Municipal reform will lead to fewer, but larger, municipalities. In some cases, particularly where the municipalities concerned have different pension arrangements, the reform can increase the number of tender processes.

“The new product will be more important when it comes to encouraging competition and bringing new providers to the field,” he says.

And he contends that Storebrand has a lot to offer potential clients. “We want to use our knowledge to produce pension solutions based on cost-effective administration, state-of-the-art sustainable asset management, competitive returns, improved solutions for advice and communication and, in addition, build on our private-sector experience to provide better digital solutions helping employees understanding what pension amount they can expect,” Grefstad says.