​Norway to cut €6.7bn of ‘upstream’ oil and gas companies from SWF

Instead, the ministry announced today a proposal for the fund to divest NOK66bn worth of exploration and production – also known as ‘upstream’ – oil and gas companies.

In its report on energy stocks in the sovereign wealth fund – which will now go on to be discussed by parliament, the ministry and the fund’s manager Norges Bank – the ministry said the move was aimed at reducing the aggregate oil price risk in the Norwegian economy.

Shortly after the report was released, Norges Bank said that, according to index provider FTSE Russell’s definitions, the GPFG held exploration and production companies with an approximate value of NOK66bn at the end of 2018.

This corresponded to 1.2% of the fund’s equity holdings and less than 1% of its overall portfolio.

Norges Bank also published a list of upstream oil and gas companies held in its portfolio at the end of 2018, which included Tullow Oil, Cairn Energy, CNOOC and Chesapeake. 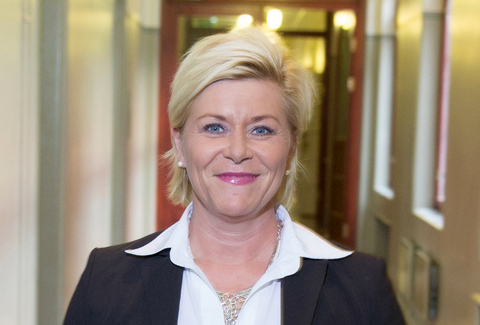 Presenting the proposals, Siv Jensen, the finance minister, said: “The objective is to reduce the vulnerability of our common wealth to a permanent oil price decline. Hence, it is more accurate to sell companies that explore and produce oil and gas, rather than selling a broadly diversified energy sector.”

Norges Bank had recommended in late 2017 that the fund remove all oil and gas sectors from its benchmark index, which would have resulted in around NOK300bn of divestment.

This idea has been the subject of much discussion since, with the bank suggesting in May last year ways in which the fund could remain invested in the sector.

In August, a commission chaired by Øystein Thøgersen released a report arguing that selling energy shares would not be effective insurance for the fund against a permanent decline in oil prices.

The ministry said today that companies classified as exploration and production companies by index provider FTSE Russell would be excluded from the GPFG’s benchmark index and investment universe.

The proposal would serve to reduce the aggregate concentration risk associated with this type of activity in the Norwegian economy, it said, adding that – like the advice from Norges Bank – its assessment did not reflect any specific view on the oil price, future profitability or sustainability of the petroleum sector.

“The oil industry will be an important and major industry in Norway for many years to come,” Jensen said, adding that Norway’s revenues from the continental shelf were, as a general rule, a consequence of the profitability of exploration and production activities.

“Therefore this measure is about diversification,” she said.

Exploration and production companies would be phased out of the fund gradually over time, the ministry said. Plans for divestment would be prepared in consultation with Norges Bank after parliament has debated the proposal.

Explaining its decision to exclude only upstream oil and gas activities, the ministry said the energy sector was broad and included businesses throughout the value chain, as well as pure-play renewable energy companies.

“It is anticipated that almost all of the growth in listed renewable energy over the next decade will be driven by companies that do not have renewable energy as their main business,” Jensen said, adding that the GPFG should be able to participate in this growth.

The ministry said the government did not plan to sell shares held by the State’s Direct Financial Interest, a portfolio of directly held oil and gas shares, nor would it sell out of state-owned energy group Equinor.

It also planned to ask Norges Bank to review its efforts relating to climate risk in the GPFG, particularly regarding the individual companies that contributed the most to this risk within the fund.