Asset managers are replacing banks in the supply of credit to certain sectors of the economy. Does this increase systemic risk? Carlo Svaluto Moreolo investigates

As asset managers increase their exposure to private debt the debate on shadow banking intensifies. Regulators worry that the growth of non-bank lending may increase global systemic risk, as it did before the crisis. But asset managers dislike being classified as shadow banks. In their view, they should not be categorised as engaging in banking in the traditional sense.

• The share of private debt assets on asset managers’ books is growing.
• Regulators are concerned that the growth of non-bank lending may increase systemic risk.
• Risks remain despite the industry having learnt lessons from the financial crisis.
• Investors should be aware of fund structures, particularly liquidity profiles.

The October 2014 Global Financial Stability Report of the International Monetary Fund (IMF) drew attention to the potential risks: “It is not clear whether the shift of some activities (such as lending to firms from traditional banking to the non-bank sector) will lead to a rise or reduction in overall systemic risk. There are, however, indications that, as a result, market and liquidity risk have risen in developed economies.”

According to the IMF, one of the difficulties in assessing the impact of shadow banking is “the lack of detailed data”. It is hard to define what shadow banking is, let alone measure it, as it is opaque by nature. But in the absence of substantial problems with liquidity there are few reasons to believe this transformative trend will stop.

Tightening banking regulation since the 2008-09 crisis has forced traditional banks to keep liquidity levels high and leverage low. Institutional investors look for returns outside of traditional asset classes. Last but not least, the demand for credit keeps growing, fuelled by record-low interest rates.

This is an opportunity for asset managers and a clear departure from the pre-crisis bank-dominated world. The old regime relied on maturity transformation, in which long-term assets (from mortgages to infrastructure loans) would be funded with short-term liabilities (bank deposits). Often, such long-term assets were held in highly leveraged, off-balance-sheet vehicles.

Rob Allard, CEO and founder of Firebreak Capital, a hedge fund specialising in private debt, says that the emergence of an alternative system for lending is nothing more than a “healthy reaction” to the financial crisis.

“What asset managers are not trying to do is become banks,” says Allard. “Because they attract longer-term capital than banks, they have a more appropriate capital base to deploy to certain sectors, including prime and mid-prime consumer lending and business finance.”

Steve Clark, head of risk and founder of Omni Partners, a hedge fund that partially focuses on private debt, also sees it as a positive development. “Having asset managers provide more credit takes a big chunk of risk out of the financial system. The assets are no longer sitting on the balance sheets of banks that cannot be allowed to fail,” he says.

While banks are still the cheapest lenders, argues Clark, the crisis has forced them to increasingly centralise their credit control functions. This makes them inflexible and therefore unsuited to the needs of many borrowers. “If you have centralised credit control, you can’t do any business that is outside a pre-determined box.” Clark says that, instead, private debt will become a “vanilla product” for pension funds and insurance companies.

The hope is that there will be no return to financial crisis as long as certain conditions are met.

First, investors need to be clear about the arrangements they enter with private debt managers and funds need to be structured in a way that limits the possibility of liquidity shocks.

“You may be judged to be a shadow bank if your customers treat you as such, by assuming that the money the invest is equivalent to a deposit,” says Jones. “While investments in infrastructure debt will become more liquid over time, we never promise liquidity. We only take funds from people that are genuine long-term investors.”

Second, transparency is paramount. To avoid shocks, investors may demand a detailed account of the individual assets they are acquiring.

These can be demanding requirements. But as the trend continues, there is an acceptance that the existing regulation is working and that, where necessary, the market is self-regulating efficiently.

Clearly, several lessons have been learned from the crisis. Matt Bass, the chief operating officer of AllianceBernstein’s alternatives business, points out that the removal of the banking ‘middle-man’ has meant managers’ and investors’ interests are aligned.

Bass’ experience includes working with the US Treasury during the financial crisis when he designed and implemented programmes targeted at the mortgage market. He says: “Once mortgages were originated, sold to a bank, which would then sell them to a securitisation trust. The ultimate investor had no ability to understand what was in the investments, and banks retained no risk.” Now the picture has clearly changed.

Terry Glomski, senior portfolio manager for mortgage and real estate strategies at Neuberger Berman, explains that his company’s model in mortgage lending entails taking responsibility for the assets it holds, including dealing with defaults. This increases the level of protection for investors.

Glomski adds: “As a result of the financial crisis, American finance laws are very strong. Whatever we do in terms of lending is as regulated as banks doing it.”

Colin Fleury, head of secured credit at Henderson Global Investors, says there are risks to be considered. First, there is the risk that investors buy into these asset classes with the wrong investment horizons, having misunderstood their liquidity profile. The responsibility to understand the risks involved lies with both investors and managers.

But some would disagree that the inherent illiquidity of private debt assets could create problems for investors. Firebreak’s Allard points out that his fund locks in capital for three years, and criticises the notion that private debt assets are necessarily more illiquid than public debt ones.

He says: “Do you think that a hedge fund that invests in high-yield and leverage loans that provide one month liquidity to investors is sufficiently liquid? I would say that market massively misprices the liquidity risk associated with public debt assets.” 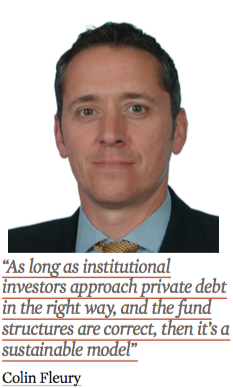 Another risk, according to Fleury, may be that the track record of many asset managers in direct lending is limited. Individual portfolio managers might have experience gained within the banking sector, but investors will need to assess how transferable this is to the specific strategy proposed. A direct-lending strategy might not function in the same way through the credit cycle as a part of two inherently different organisations.

Fleury adds, however: “These risks should be manageable. As long as institutional investors approach private debt in the right way, and the fund structures are correct, then it’s a sustainable model.”

Given the way that the banking-led model unravelled, asset managers have a strong case when they argue that they are better placed to supply credit to many sectors of the economy.

William Nicoll, co-head of alternative credit at M&G, takes the view that, in fact, asset managers are reclaiming their natural space, rather than entering uncharted territory.

Nicoll says: “It is only natural that there should be competition in markets such as mortgages, SME [small and medium-sized enterprises] lending or commercial real estate debt. The markets are currently feeling which assets should go where. We went from a period of unnatural stillness, when banks had all the business, to chaos. Now we are in a phase of movement, change, while we are the natural lenders to every asset. It may last for a few years.”

But the danger that exuberant lending may create asset price bubbles does not simply fade away. Managers and investors need to identify the right opportunities. This is essentially means avoiding a repeat of the sub-prime crisis, where loans were extended to entities that were anything but creditworthy.