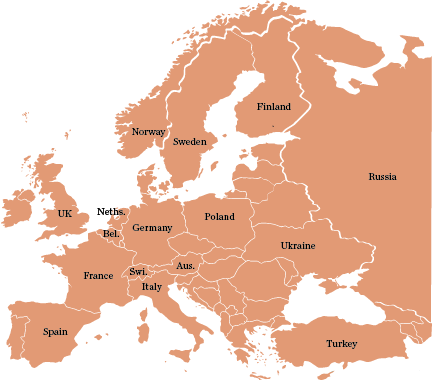 Geopolitical tensions look set to be felt across Europe in 2017. Daniel Ben-Ami  and Carlo Svaluto Moreolo  outline some of the most important

Germany
Germany is facing the prospect of a populist party playing a greater political role after the federal elections in late summer or early August. Although the Alternative für Deutschland (AfD, Alternative for Germany) is unlikely to gain a place in government, it could win seats in the Bundestag (national parliament). It is sobering to recall how fast the party has risen. It was founded in 2013 on a technocratic platform which emphasised the need to shrink the euro-zone to exclude its weaker member-states. Its supporters included many economists and senior academics. The party made a dramatic shift in 2015 when the original leader, Bernd Lucke, was ousted. Since then, under the leadership of Frauke Petry, it has taken a strong line against immigration and Islam. The AfD has cultivated close links with Vladimir Putin’s United Russia Party. This year the AfD performed well in regional elections, winning sizeable minorities in several Länder (federal states). If it achieved comparable results in federal elections it would be clear of the 5% threshold necessary to take up seats. Its presence in the Bundestag would be unsettling to many in Germany with its troubled mid-twentieth century history. No party to the right of the Christian Democratic Union or the Christian Social Union, its Bavarian sister party, has played a role in government in post-war Germany. Although the AfD would be in opposition, its open hostility to foreigners is troubling.

UK
Although the Brexit referendum result was arguably the largest political shock this year, it does not follow it will have a comparable impact in 2017. It now looks likely – although not certain – that the UK will leave the EU. The debate is focused mainly on the likely terms of its departure. James Wood-Collins, the CEO of Record Currency Management, says: “There will be an ongoing rolling debate over whether it is a ‘hard Brexit’ or ‘soft Brexit’.”

In any event, it is likely to be a protracted process that will not end in 2017. As things stand, the government is expected to invoke Article 50 of the Lisbon Treaty in March. That would open the way for up to two years of negotiations on the terms under which Britain leaves the EU. However, as always seems the case with this topic, things may not end up being so simple. At one end of the scale, it is possible that a legal challenge to Brexit is successful or that MPs exercise an effective veto. At the other end, is the possibility that Britain will break all the old institutional ties with its former EU partners. Perhaps most likely, although far from certain, is a compromise in which Britain leaves the EU but maintains a close relationship with it. In any event, it is important to realise that the impact of the UK’s planned exit from the EU cannot be easily separated from its long-standing economic weakness. Yu-Ming Wang, the global chief investment officer at Nikko Asset Management in Tokyo, says: “The UK is trading like an emerging market. If you look at the currency volatility, the UK is paying the price of running a current-account deficit in a situation of major political risk turmoil. It is very similar to what India did three or four years ago”.

Netherlands
The Dutch parliamentary election in March also represents the possibility of a populist party, in this case the Partij Voor de Vrijheid (PVV, Party for Freedom) of Geert Wilders, winning a greater role. It has been the first or second most popular party in the country in recent opinion polls. Wilders is a vocal critic of Islam and frequently warns of what he sees as the dangers of Muslim immigration. He is facing a trial for hate speech in relation to a pronouncement in 2014 that there should be fewer Moroccans in the country. He also publically welcomed Brexit, although there is evidently no provision for a similar referendum under Dutch law. There was a plebiscite on an EU-Ukraine association agreement in April that many saw as a test of broader attitudes towards the EU. Over 60% of those who voted opposed the accord, but turnout was 32%.

France
The biggest political shock of 2017 could result if Marine Le Pen, the candidate of the far right Front National (FN), wins the presidential elections. The first round is scheduled for 23 April with the second round, in the likely event of no candidate winning an absolute majority, on 7 May. On the basis of current opinion polls it looks likely that Le Pen will make it through to at least the second round. If that is the case, she could well find the other main parties coalescing around the opposing candidate. That was what happened in 2002 when her father Jean-Marie, then leader of the FN, made it through to the second round.If Marine Le Pen is elected president, she has promised to pursue economic policies that would pit her against the European mainstream. She has publically stated her opposition to free trade and support for a negotiated withdrawal from the euro-zone. Le Pen also favours a Gaullist economic policy with the state promoting big industrial champions.

Italy
The decisive rejection of Matteo Renzi’s constitutional reform programme in a referendum probably marks the last seismic political event of 2016. It was widely interpreted abroad as a revolt against mainstream politics although many establishment figures rejected both the plan and the centre left prime minister.

Renzi formally announced his resignation as soon as the result was announced. But shortly afterwards he agreed to a request from President Sergio Mattarella to stay on for a few days until the budget is passed.

It is not yet clear what the outcome will be even in the slightly longer term. There are reports of another election in March with Renzi making a bid to return to power. However, any such election would raise the possibility of populist parties such as the Five Star Movement and the Northern League gaining more influence.

From a financial perspective the most pressing concern is that the uncertainty could trigger a crisis in Italy’s banking sector. Monte dei Paschi di Siena, one of the country’s largest banks, has already requested a state bailout. Overall the country has one of the highest levels of non-performing loans in the euro-zone.

In any event the economy is still mired in stagnation. A report published by the International Monetary Fund in June said output is not expected to return to its pre-crisis (2007) peak until the mid-2020s.

Unemployment is running at 11.6% according to the latest figures from Eurostat. Youth unemployment (under 25) is 36.4%.

Turkey
Turkey’s geopolitical significance stems from its role as a bridge between Europe and Asia. For example, it has inadvertently helped bring the Middle East’s tensions into Europe through its role as a destination for refugees. Amnesty International estimated that Turkey hosted 2.5m Syrian refugees alone. A significant number, although it is difficult to tell how many, would like to settle in western Europe. European leaders have tried to persuade Turkey to stem these flows. For instance, the EU offered Turkey aid and visa-free travel for its citizens in return for stopping the refugees travelling onwards. Meanwhile, Recep Tayyip Erdoğan, the Turkish president, is the subject of western criticism for his human rights record and suppression of the media. His response is to reject what he sees as foreign intervention in Turkey’s domestic affairs and to suggest the critics do not understand the country’s difficult strategic plight. It looks likely that strains between Turkey and EU member states will continue in one form or another over the coming year.

Russia
Tensions between Russia and the West look set to remain as a feature of European geopolitics in 2017. Bill Priest, the chief executive officer of Epoch Investment Partners in New York, reflects a widespread view in the West when he says: “Russia is a huge problem. Russia is becoming increasingly belligerent.” Many western politicians are preoccupied with how to contain what they see as this ominous threat. Others take a more pragmatic view. Michael Levy, an emerging markets fund manager at Barings, points to the potentially negative effect on investment of western measures against Russia. “Increased tension between Russia and the EU with its US partner may lead to further sanctions,” he says. It should also be remembered that there is a significant current of western politicians who, for various reasons, support Vladimir Putin, the Russian president. Some share his social conservatism and admire his strong-man status, while others see practical benefits in better political ties with Russia.