The aggregate shortfall across FTSE350 defined benefit (DB) pension schemes was equal to 70% of 2016 pre-tax profits at the end of last year, according to Barnett Waddingham.

Changes in actuarial assumptions such as discount rates had led to the aggregate deficit remaining broadly unchanged since 2009, Barnett Waddingham reported, despite £70bn being paid into schemes in that period (see chart, below).

“Based on the substantial amount of deficit contributions paid by FTSE350 companies since 2009, an aggregate surplus was expected to have materialised by this point,” Barnett Waddingham said in its report. “However, the sharp fall in corporate bond yields since 2009 (and the corresponding drop in IAS19 discount rates) has put paid to these expectations.”

Discount rates used in 2016 were on average 3% a year lower than those used in 2009, the firm said, increasing the cost of meeting liabilities by more than 70%.

Cumulative actuarial losses amounted to £63bn between 2009 and 2016, the company said. 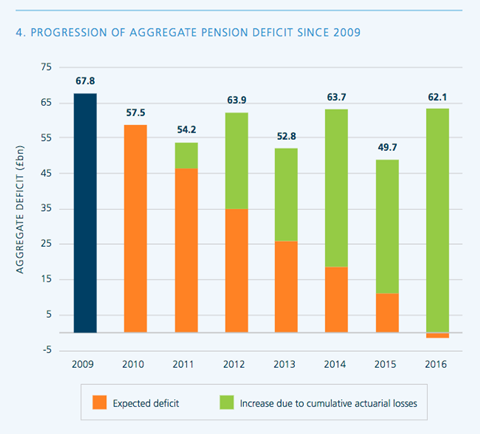 One of the only factors acting to reduce liabilities was mortality, Barnett Waddingham said. According to work by the UK’s Continuous Mortality Investigation released earlier this year, longevity has not improved overall for the country’s population since 2011.

Barnett Waddingham estimated that, if this data had been used in financial statements last year, it would have reduced the aggregate deficit by roughly £10bn.

Despite the gloomy outlook, Nick Griggs, partner at Barnett Waddingham, said: “It is also worth bearing in mind that if equity returns continue at the levels seen in the last few years, long-term interest rates rise more than expected and longevity increases do not provide any nasty surprises, the pension deficit problem could solve itself.

“We must remember that the deficit is essentially the difference between two much bigger numbers and a few gentle economic triggers could completely change the picture. This is why many companies are not rushing to clear deficits quickly with additional cash contributions.”

Barnett Waddingham’s report also found that the aggregate deficit increased as a proportion of total market capitalisation in 2016, despite the equity market’s strong performance. 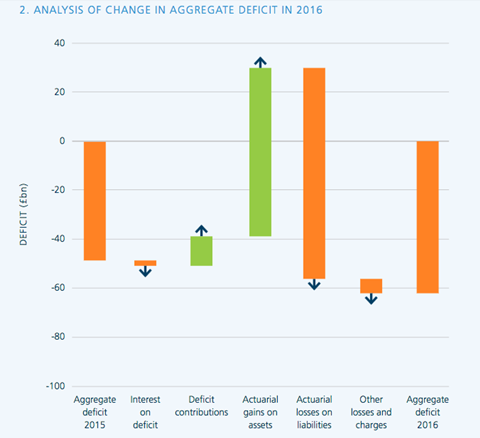 In separate research also published today, JLT Employee Benefits found that the UK’s 100 largest listed companies had combined DB liabilities of £681bn at the end of last year, an increase of £95bn in 12 months.

JLT’s research showed that measures such as closing to new and existing members had made little difference to DB obligations. Provisions fell by 12% in 2016, the company said.