The Netherlands’ five open pension consolidator vehicles – known as general pension funds, or APFs – doubled their combined assets under management in 2018 to €9.8bn, according to a survey by IPE’s Dutch sister publication Pensioen Pro. Total membership also increased from 44,000 to 94,000.

However, contrary to previous surveys, none of the APFs were in a position to announce new commitments at the start of 2019. Recently, the €1.1bn scheme for HR services firm Randstad said it had selected an APF, but did not specify which one. The €1.5bn pension fund of automobile organisation ANWB has also announced its intention to join a general pension fund.

In the survey, APFs indicated that they were upbeat about 2019, with Arnout Korteweg, executive trustee at De Nationale APF, saying that his scheme had received 30 information requests last year. Interested schemes included pension funds with assets exceeding €2bn, he added. 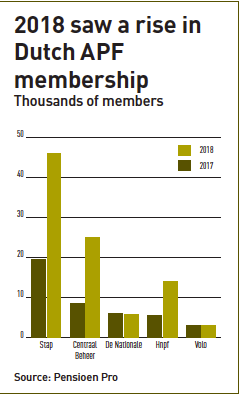 Hnpf indicated that an increasing number of larger pension funds were assessing the option of joining an APF. Centraal Beheer APF also reported “many” requests, adding that it soon expected to announce new entrants.

APFs yet to reach critical mass
De Nationale’s Korteweg said several pension funds were reluctant to commit because of uncertainty about the Dutch pensions system.

According to Gerard Frankema, director of Stap, his APF was not operating under cost-covering conditions yet, explaining that the setup of the organisation was based on growth of the number of collective compartments for pension funds.

Korteweg said that over €5bn of additional assets was needed to break even. The €1.4bn Hnpf indicated that it would need assets under management totalling €7bn to cover its costs, while Centraal Beheer could not provide clarity on the issue.

Meanwhile, the liquidation of PGGM’s Volo seems to be a matter of time, following the pension provider’s decision to discontinue its APF. Currently, Volo has just two clients – the pension funds for Ortec and Jan Huysman.

Eric Goris, Volo’s chairman, said it was assessing options for transferring its clients to another provider and liquidating the vehicle.

UK awareness challenge
In a survey by consultancy Hymans Robertson in the UK, a quarter of trustees said that transferring their scheme to a consolidator vehicle would improve the security of pension benefits.

The poll of 131 pension scheme trustees found that 35% of respondents had not heard of The Pension SuperFund, while 60% did not recognise Clara-Pensions.

The two companies emerged last year as independent consolidators for private-sector defined-benefit (DB) pension schemes. The industry is waiting for a legislative framework for the new vehicles, although The Pensions Regulator has set out its guidelines for schemes considering transfers.

Alistair Russell-Smith, head of corporate DB at Hymans Robertson, said: “There is clearly a widespread lack of knowledge in the industry about the new players in the commercial consolidation market… [They] could benefit a significant minority of schemes, so it is vital the industry builds and grows its understanding about them.

“Trustees concerned about the long-term covenant support should also seriously consider this option if the cash is now available. Without fully understanding the options available, there is a chance that trustees could miss an opportunity to improve member security.”

Danish mergers
Meanwhile, the Danish Pension Fund for Engineers (DIP) is continuing in talks with the Lawyers’ and Economists’ Pension Fund (JØP) about merging. JØP members will vote on the consolidation on 24 April,  while DIP members will vote on 29 April. DIP said the merger would place the resulting fund among Denmark’s 10 largest pension funds and allow it to access more lucrative investment opportunities.

JØP and DIP have been strengthening their collaboration for several years, while Denmark’s other engineering fund, ISP, has also been involved in talks regarding a potential merger.

In January 2017, the chief executive of P+ – the joint administration company that runs JØP and DIP – said the schemes’ boards were working on a full merger “within two or maybe three years”.

The Danish Society of Engineers formally proposed a merger between DIP and ISP in March 2017 in an attempt to push forward with a collaboration that had been discussed for close to 20 years. Since April 2018, contributions from new ISP members have been directed to DIP.

JØP and DIP together are responsible for DKK120bn (€16.1bn), while ISP has DKK17bn of assets under management.