Several deadlines for changes to Romania’s second pillar have passed with no word from the government.

In late August 2018, a draft bill which included cuts in mandatory contributions to pension funds from 5.1% to just 1% alarmed the pensions sector.

The announcement came after the government decided in 2017 to freeze the contribution level rather than increasing it to 6%. This was the level agreed, when the mandatory element was introduced in 2007.

The 2008 financial crisis hit Romania hard, and government debt is still rising. According to calculations by the pension fund association APAPR, almost €2bn has been ‘tapped’ from the second pillar through reduced contributions.

Defending its decision, the government quoted an official study saying the first pillar is more efficient than the second. However, local pension stakeholders say the government still has its eye on second-pillar pensions to plug the budget deficit.

APAPR has calculated Romania’s implicit pension debt – for the pay-as-you-go first pillar – to have been €275bn for 2015, using National Statistical Office datasets.

APAPR points out that this is almost four times larger than the visible, explicit public debt of the country. Since 2015, public pensions have been increased by a further 30% and now the government envisages a doubling of current public pensions until 2021 as per the draft law, APAPR also notes. 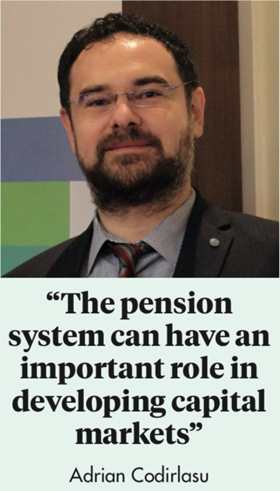 One of the challenges for the medium term sustainability of the first pillar is demography. “We have the second-highest rate of people leaving the country after Syria,” stresses Adrian Codirlasu, president of the Romanian CFA society. “And we have a negative increase in population.”

According to a UN International Migration report between 2007 and 2015, about 3.4m Romanians emigrated. The UN has warned that these negative demographic trends are set to continue.

The budget deficit has reached its 3% Maastricht threshold, and the fledgling pension sector is fighting for survival. “There is still a risk that either contributions will be reduced or that the government will make the second pillar completely optional, scraping the mandatory element,” warns Codirlasu.

These considerations are opposed to the government’s own debt management strategy, as published last year. It identified institutional investors, such as local asset managers and pension funds, as having “a significant potential to support the development of the local government securities market”.

This is also confirmed by the CFA, which also believes the pension system can have an important role in developing capital markets.

Codirlasu explains that in Romania, private pension funds are the primary institutional investor in both free-float ownership and transaction volume on the Bucharest stock market. “More than 90% of the private pension funds’ equity exposure is to Romanian companies,” he notes.

In a report published in June, the IMF praised the “significant progress” the country has made in its capital markets.

It continued: “More liquidity has been brought to the market, both the domestic and foreign investor base has deepened, and medium to longer term investment has increased”.

But, the IMF noted that this “positive momentum needs to be maintained” and warned: “Country level concerns regarding government support for the development of the market, corporate governance of state-owned enterprises and changes to the private pension system, risk reversing the progress made to date.”

In November, the IMF reiterated its warning saying “planned changes to pension benefits should be reassessed for their negative implications for fiscal sustainability and long-term growth.”

Given the exposure of pension funds to local capital markets, it is unsurprising that the announcement of possible contribution cuts to the second pillar have impacted on the stock market.

“Over the last years, we had a record number of IPOs with pension funds as the main buyers but now the uncertainty around the second pillar has halted all such transactions,” notes Codirlasu.

Not only are pension funds major contributors to the stock market, but they also hold a large slice of Romania’s government debt. Given the restrictive investment regulations, over 75% of the assets are still in fixed-income securities and money market instruments. In total, pension funds hold 18% of local government bonds, or about 7% of overall public debt.

Romanian private pension funds currently manage about €10bn in assets and the APAPR estimates this will reach €13bn by the end of 2020. Annualised returns since inception stood at 8.43% in December 2017. The seven funds serve over 7m Romanians – over half of the economically active population.

APAPR notes that maintaining the second pillar will be necessary if Romania’s equity market is to transition to developed status.

“We do not know when the government will present its plans for the second pillar,” says Codirlasu. “So far, every deadline given for a proposal has been postponed.” Over the last months, there has been radio silence on pensions, he adds.

BCR bank, a subsidiary of Austria’s Erste Group, even organised lessons on basic financial knowledge in 25 cities attended by 13,230 people.

In an APAPR survey conducted this year as part of a financial awareness campaign, respondents were asked about their opinions on the second pillar. Some 71%, said this part of the pension system should be “maintained and developed”. The same proportion “understands the money earned in this pillar is their own property”.