• The second pillar contribution moratorium has been extended into 2016.
• But assets and membership have surged.
• The Bank of Russia has increased governance and risk requirements, which has forced consolidation.
• Asset allocation is shifting towards the real economy.

Russia’s mandatory second-pillar non-state pension funds (NPFs) face yet another moratorium on contributions in 2016, despite earlier promises to the contrary. However, the system is becoming more secure and transparent for its members, with the Bank of Russia, the central bank and pension fund regulator, closing down funds that fail to comply with legislation.

State pensions are funded by a levy on employers of 22% of the wage base, of which 6% has gone to the second pillar, and the remainder to the first pillar Pension Fund of the Russian  Federation (PFR). The assets are managed by the NPFs, the fund run by state-owned Vnesheconombank (VEB), or at the PFR by asset management companies.

Budgetary constraints again forced the government to impose the latest contribution moratorium, the third in a row, as the economy slid into recession in 2015 after five years of growth. In 2016, the moratorium will enable the government to direct some RUB342.2bn (€4.9bn) to the PFR, reducing transfers from the budget.

Evgeny Yakushev, chairman of the board of directors of European Pension Fund estimates that, for a 30-year-old man, the three contributions moratoriums will result in an overall potential loss of 5-7% of his eventual pension. 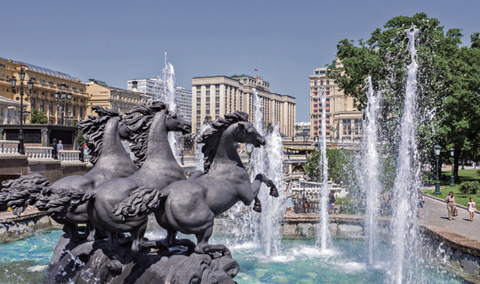 In the second quarter of 2015, membership of the second pillar system surged by about 6m people. Under the 2014 pension reform law the funds that wish to remain in the mandatory pension business need to convert to joint-stock companies and get Bank of Russia authorisation to apply to the guaranteed fund system – which covers members’ losses in the event of a bankruptcy – run by the Deposit Insurance Agency (DIA). Only funds in the DIA scheme could receive contributions frozen in the second half of 2013, as well as new members transferring from either other funds or VEB management, a process that started in May 2015. 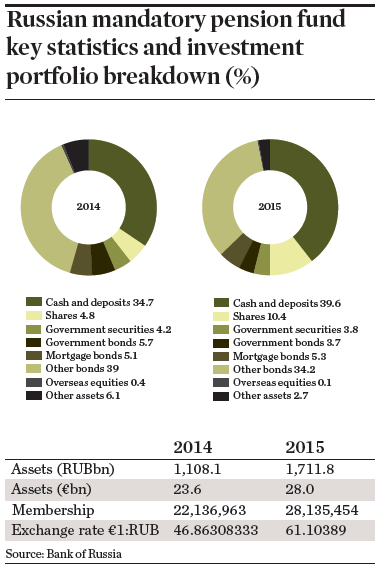 As of last November, 32 funds, accounting for some 95% of all assets and members, were signed up to the DIA, with 29 in the process of applying to the Bank of Russia, the deadline for which expired at the end of 2015, while 14 have not applied.

The number of funds is also shrinking as a result of the Bank of Russia’s crackdown across the financial sector. Between August and November 2015 it annulled the licences of 13 NPFs for a range of violations, including excessive investments in mortgage certificates of related companies and non-compliance with money laundering regulations. None of these funds, which together had 1.24m members and pension savings of RUB55.4bn, were part of the DIA system. The funds have been placed under provisional administration, with the central bank guaranteeing members’ nominal savings, and the DIA running bankruptcy proceedings.

Some of these component funds are now ready to be merged – for example, the five BIN funds, which will be combined into a new platform called ‘Safmar’. Yakushev told IPE the process will start in 2016, with each merger requiring Bank of Russia approval. “The main idea is to generate a synergy effect, with bank branches acting as the front office, and decreasing operational costs,” he explained. “The big challenge is to retain best practice from each fund.”

The O1 Group plans to complete its merger of FUTURE and Stalfond by the first quarter of 2016 under the FUTURE name, with a combined membership of more than 3.5m. 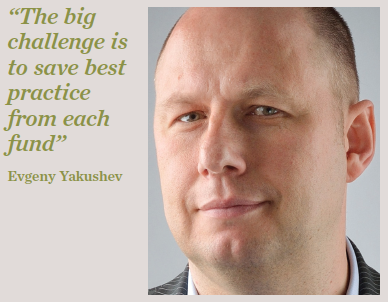 “Our goal has been to create a modern and efficient platform which takes advantage of the scale of our pension business, and to build an organisation which is financially responsible and helps make pension products more understandable to the public,” O1 said in a statement sent to IPE. “For clients of both funds, the merger is a very positive event. The new fund will not only provide a more robust platform; our investment in technology will deliver for clients new levels of communication and accessibility.”

Meanwhile, the Bank of Russia has further plans to make the system more robust, including making the NPFs’ shareholders responsible for reckless investment decisions and introducing new risk management procedures for the NPFs. “These changes entail minimisation of risks as well as a better balanced portfolio structure. We had ours approved last summer, in anticipation,” said Yakushev. “Previously, the risk-management function was conducted exclusively by asset management companies that managed our portfolio, but that situation has changed significantly. We implemented a sophisticated system within the fund in order to organise an efficient two-level risk management process.”

Investments shift from bank assets to the real economy

The main change in asset allocation in 2015 for Russian mandatory non-state pension funds was a shift from deposits and bank bonds, which used to comprise the bulk of the portfolio, to less than 30%. According to Bank of Russia’s end-September data, corporate bonds were 39.2% of NPF portfolios, followed by bank deposits and cash (28.7%), and shares (13%).

“Funds are now looking towards opportunities in the real economy where, due the joint actions of the government, regulator and market players, a number of larger projects have become attractive for investment,” O1 Group told IPE in a statement. “As part of this new strategy, funds managed by O1 Group have concluded several important deals, such as becoming the anchor investor in financing the construction of the M11 Moscow-Saint Petersburg highway where, together with other private pension funds, we have invested about RUB5.5bn. Landmark investments such as these are a great example of the government and pension funds working together to develop the economy. About RUB190bn has been invested in public infrastructure by Russian private pension funds in 2015.”

A new investment option was launched in July 2015 in the form of federal inflation-linked bonds, issued by the Ministry for Finance. “NPF FUTURE has applied for an allocation of bonds totalling RUB4bn,” says Sidorov. “We see such bonds as optimal in terms of the ratio of risk and return. On the one hand they allow a high probability to overtake inflation at a fixed rate coupon and insure the majority of inflationary risks.

“On the other hand, we feel they are liquid enough to get out of this asset without loss, if necessary. These bonds may become the benchmark for inflation products, with issuances being considered now by many large public and private companies that are responding to pension funds’ desire for more investment opportunities.”

Yakushev says 90% of the European Pension Fund’s portfolio is in fixed income, including deposits, mortgage and corporate bonds. The fund has also invested in Russian inflation linkers.

“Our portfolio also contains several high-class bonds issued by government-private partnerships,” he added. These include bonds issued by Two Capitals Highway, the company building and operating a new toll road between Moscow and St Petersburg, and railway freight operator Freight One.

With Russia suffering a severe shortage of international investment capital since the Ukraine crisis, the authorities have turned to the pension funds, including extending the investment horizon to five years. Meanwhile the central bank has reduced the maximum investment limit on bank deposits from 80% to 40%, which Yakushev regrets given the superior returns that the instruments can generate.