The results of the 2015 LCP Ireland Pensions Accounting Briefing highlight that many companies remain under pressure in maintaining their defined benefit (DB) pension schemes. Falling bond yields over 2014 had a dramatic impact on corporate balance sheets despite the positive performance of equity markets. One scheme was wound-up in 2014; benefits have been cut in others and more are implementing deficit funding programmes.

The introduction of the Funding Standard Reserve, while likely to result in a welcome reduction in risky asset holdings, comes when many companies can least afford it. Our 2015 analysis shows that despite stringent deficit management initiatives and contributions well in excess of accruals, the average funding level has fallen to 83%, the same level as in our 2009 report despite the significant contributions paid in. We expect scheme closures, enhanced transfer value exercises and capping of future increases will continue into 2016.

The survey covered 15 of the largest companies (by market capitalisation) listed on the Irish Stock Exchange and other exchanges that have Irish DB pension arrangements. It also covered 11 semi-state/state-controlled companies with DB schemes that have published pension accounting information for their 2014 financial year. 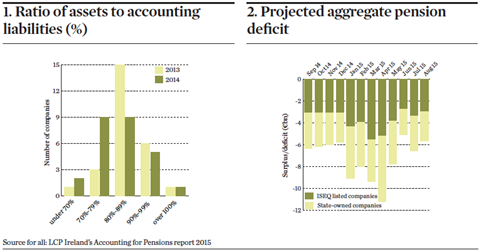 This fall was a result of the drop in yields on high-quality corporate bonds (used to place a value on the accounting liabilities) in 2014. The deterioration in funding levels would have been greater had it not been for the strong rise in scheme assets (equities and bonds) in 2014.

We considered the movement in the pension scheme balance sheet positions during 2015. On the asset side, global equity markets rose during 2015 before falling sharply during the third quarter against weakening economic growth in China, previously an engine for economic growth over the past decade, and uncertainty about US interest rates. 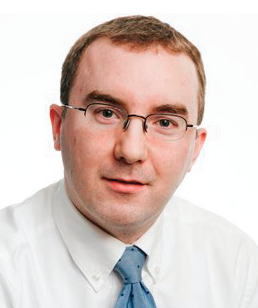 On the liability side, high-quality corporate bond yields as of the end of August 2015 were about 0.30% per annum higher, on average, than the end of 2014. These higher yields mean that IAS19 liability values have decreased during 2015 and provided some respite against the continued increase in pension liabilities.

As figure 2 shows, there can be significant volatility in the deficits from month to month as equity values and bond yields fluctuate. Indeed, when bond yields fell to the lowest point in April 2015, it is estimated that the aggregate pension deficit exceeded €10bn.

One company included in last year’s survey made a final contribution into its Irish DB plan and it was subsequently wound up. Another scheme, which included elements of DB and defined contribution (DC), was closed to new entrants and a new DC scheme introduced. 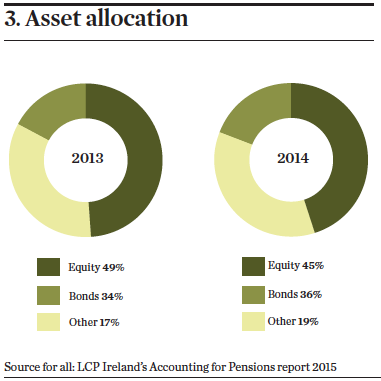 There is evidence that trustees are actively reviewing their investments and implementing de-risking strategies. We expect this to continue as many schemes review asset strategies as part of recent funding proposals.

In previous years, we reported that Irish pension schemes had higher allocations to equities when compared with other jurisdictions. Our current analysis continues to support thi s. For example, in the UK, about 30% of pension scheme assets were allocated to equities at the 2014 year-end compared with 45% for schemes in this report.

The companies analysed paid substantial contributions, over €1.27bn, to their pension schemes in 2014. It is clear that pension schemes remain one significant cost for these organisations. 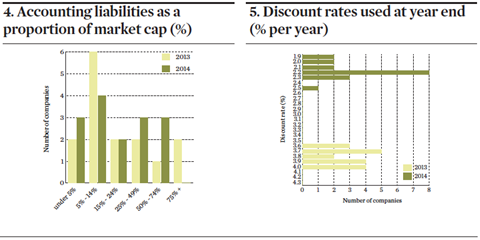 The discount rate is the key assumption used to value pension liabilities. Under IAS19 and FRS17, this assumption is based on the yields available on long-dated high quality (typically AA-rated) corporate bonds in the currency of the liability at valuation date.  The yields on high quality corporate bonds, and hence the discount rates, will fluctuate from day to day in line with market conditions.

In figure 5, we have analysed companies reporting with December 2014 year-ends. As this shows, there was a significant fall in the discount rates disclosed compared with 2013.

We continue to see convergence of the discount rates used by companies in their pension disclosures. This is welcome and makes it easier for readers of annual reports to compare the pensions’ exposure of companies on a more consistent basis.

Mick O’Byrne is an actuary at LCP Ireland. The 2015 LCP Ireland Pensions Accounting Briefing is available to download at www.lcpireland.com