On 18 March, public transport in the Netherlands was paralysed for exactly 66 minutes. The standstill – caused by industrial action organised by the trade unions – symbolised a retirement age of no more than 66 for the state pension (AOW). It indicated how crucial the issue is to the unions.

Without the cabinet’s promise to freeze the official retirement age at 66, they refuse to return to the negotiating table for pensions reform.

Last November, the reform negotiations broke down, because the players had failed to reach agreement on the AOW age. The same went for the related issue of early retirement for workers in physically and mentally challenging jobs.

In the wake of the collapsed negotiations, the cabinet has made clear that it wants to press ahead with pensions reform, if necessary without the social partners. Outlining his view in a letter to parliament last February, social affairs’ minister Wouter Koolmees said he was willing “to assess” whether the scheduled increase of the AOW age could be slowed. The cabinet’s approach has further angered the unions.

AOW age rise
Despite looming population ageing and rising longevity, only in 2012 did the Dutch government start to make commitments for a retirement age rise to keep the AOW affordable. Initially, it decided on a gradual increase – to start in 2013 – from 65 to 67 in 2023. However, in 2016, the cabinet decided to accelerate the timeframe, aiming at 67 and three months by 2022, with a subsequent one-on-one increase with life expectancy. Currently, the retirement age stands at 66 and four months.

The AOW – a social security insurance for all citizens, rather than a work-related benefit – was introduced in 1957 for people of 65 and older. The benefits are generous, currently comprising €787 a month for a single pensioner. As a result, AOW payments are often the key component of pensioners’ income.

Since the introduction of the AOW, life expectancy for 65-year olds has increased by more than five years. Retirees now receive AOW for almost 20 years on average, rather than 14.7 years when introduced.

Doubts on retirement
In the meantime, doubts about a sudden increase in the retirement age have become widespread. Last summer, both unions and employers argued the scheduled age increase was too sudden. This view was supported by actuaries, who said that a retirement age of 67 could be postponed to 2026. Using recent Statistics Netherlands data, actuaries concluded that the AOW age could be raised five years later to 67 than currently scheduled.

“On one hand, life expectancy of 65-year-olds has been increasing slower than initially predicted, removing the need for a rise to 67 and three months in 2022, 2023 and 2024, and possibly also for subsequent years,” says Daan Kleinloog, actuary and partner at Sprenkels & Verschuren. “On the other hand, if the cabinet’s purpose is to keep the period spent in retirement for future generations constant, based on the situation in 2018 the AOW age doesn’t need to be raised to 67 before 2026.”

Kleinloog further points out that, as a consequence of the current arrangements, workers who retire at 67 in 2021, lose 3% of the state pension relative to people who retired in 2018.

Elsewhere, researchers from the Netherlands Interdisciplinary Demographics Institute (NIDI) note that the AOW age would increase faster than life expectancy in the next three years. As a consequence, the AOW age would currently rise to 70 and three months in 2050, they forecasted.

A month a year
“It would be more logical to stick to the initial – constant – rise of one month a year, which would be easy to explain and easy for workers planning their retirement,” says Joop de Beer, NIDI’s head of ageing and longevity. “This would equate to a ratio of a nine-month retirement rise for every additional year of life expectancy.” De Beer estimates additional annual costs of a 75% ratio at €1bn. Costs of keeping the retirement age at 66 would increase by approximately €1bn year-on-year, he added.

In the wake of the collapsed pensions negotiations last November, all political parties have concluded that raising the official retirement age strictly in line with longevity as of 2022, was not tenable.

However, prime minister Mark Rutte contended that, because of the high costs of a relaxed regime, only a new government could alter the disputed policy. Koolmees, for his part, has made clear that he was not willing to change the government’s trajectory for the retirement age. He argued that the increase was necessary to “catch up” with earlier trends. In his letter to parliament, he did not even mention early retirement, an option that had already been rejected by parliament in 2017.

In 2011, the social partners and the government concluded a pensions agreement that included a rise of the AOW age from 65 to 66 by 2020. While the pension age would become flexible, workers could still retire at 65, but against a 6.5% discount on their benefits for each year they stopped working early.

On the other hand, for every extra year they remained active, they would be entitled to an additional 6.5%. The parties had also agreed that older workers would be kept active through measures aimed at raising their availability, education, labour conditions and mobility.

In 2012, however, a new government coalition, pointing to “economic hard times”, abolished the pensions agreement. Many elements of the accord were not implemented. These included measures to spare older workers in hard manual jobs as well as the option of a flexible retirement date for the AOW.

Recently, in a bid to bring the unions back to negotiations, employer organisations have said they wanted the government to enable workers in physically and mentally rigorous jobs to claim AOW benefits early. While making clear that fixing the AOW age at 66 would be too expensive, they said that the scheduled rise should be levelled off.

Tuur Elzinga, the lead negotiator on pensions for the largest union FNV, welcomes the initiative, but says it does not go far enough. He notes that the cabinet has so far ignored the unions’ demands, and made clear that the government has to move if it wants to achieve pensions reform within its current mandate, which lasts until 2021. 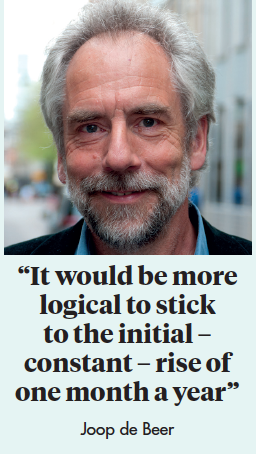 Firm conditions
Elzinga reiterates that freezing the AOW age at 66 remains one of the unions’ “firm conditions” to resuming negotiations with the employers and the cabinet. “It needs to remain 66 until a fairer method has been developed,” he says.

The unions’ other firm preconditions, according to Elzinga, are pensions for self-employed and workers in temporary arrangements as well as a new “collective and solidary” pensions contract, rather than individual pensions accrual as the cabinet wants.

The FNV’s negotiator adds that the government must also drop the heavy taxation of employers’ schemes aimed at helping retiring workers bridge the financial gap between their occupational retirement and their AOW benefits.

Elzinga further highlights the unions’ mistrust of politics, reminding that an earlier pensions agreement – concluded in 2011 – has never been fully implemented. “Instead, the government has accelerated the rise of the retirement age and has reduced early retirement schemes,” he says. “Moreover, it has lowered tax-facilitated pensions accrual.”