6
Risk Management: Is everything still good?

Risk Management: Is everything still good?

Swiss pension funds have coped well with the financial crisis, but appearances can be deceptive

Looking only at the figures, Swiss pension funds present a pleasing picture. The investment year 2017 can be regarded as a success: the average return of 7.9% was higher than at any time since 2009. The coverage ratio at the end of 2017 was 108%, 3.4 percentage points higher than in the previous year. Ten years earlier the coverage ratio was 109.1%, only 1.1 percentage points1 higher than at the end of 2017. But the appearance that everything is returning to normal is deceptive, various parameters have changed considerably.

Increasing complexity and rising administrative efforts caused the number of pension funds to contract. According to figures from the Federal Statistical Office (FSO), a third of all pension funds have disappeared in the last decade as a result of liquidation, merger or affiliation to a collective foundation; there are currently an estimated 1,650 pension funds. At the same time, however, assets in autonomous or semi-autonomous pension funds increased by about 50% (CHF600bn (€525bn) in 2007 to CHF900bn in 2017). The average size of the pension fund thus increased by 130% to CHF545m.

In order to contain the financial crisis, central banks lowered interest rates. In Switzerland, this led and continues to lead to negative interest rates, with consequences for the asset mix of the second pillar. Pension funds have increased their investments abroad. In 2007 they invested almost 40% abroad; by 2017 this had risen to 50%. However, the non-hedged foreign currency ratio has fallen.

Last, but not least, the foreign currency ratio was gradually reduced from 28.5% to 16.0% as a result of foreign exchange turbulence. Since the implementation of the Complementa Risk Check-up study, this is the lowest value measured for 24 years. Fixed-interest investments also recorded a sharp decline: 10 years ago, bonds accounted for 43.6%, while today the value is 8.5 percentage points lower at 35.1%. The proportion of shares has increased (+3.9%) as well as real estate (3.8%) and alternative investments (+3.3%); see figure 1. 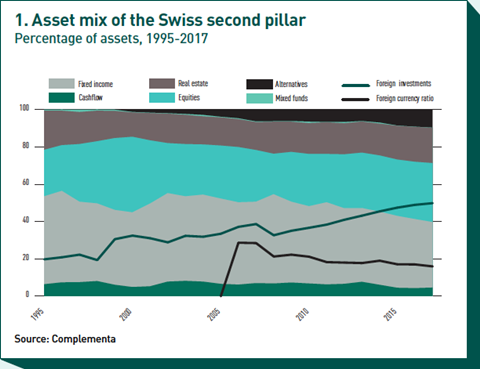 There are more changes: In the case of bonds, higher-yielding securities are preferred to government bonds. However, the entry of many pension funds into newer markets such as high yield bonds, emerging market debt and loans implies also higher risks. The higher illiquidity risks should compensate for imploded interest rates. Although, alternative investments will achieve greater diversification, the assets in 2017 include significantly higher investment risks, above 2008 levels.

Longevity is a burden

Since 2007, the technical interest rate (technischer Zins) has been gradually reduced from 3.8% to 2.3%; with consequences for the coverage ratio; a reduction by ten basis points reduces it by about 0.5%, the effect has totalled 7.5% since 2007 as a result of this reduction. However, pension capital had to be valued higher because of lower technical interest rates and rising life expectancy.

A pension granted today must be paid out much longer: In 2016, the Federal Statistical Office estimated a conditional life expectancy of 19.8 years for men at 65 years. Ten years earlier it was 1.5 years lower at 18.3 years. This increased life expectancy is likely to have cost about 2.5% of the coverage ratio. The further rising of life expectancy charges funds with more financial burden. At the end of 2017, for the first time, more pension calculations are done based on generation tables than period tables on capital-weighted basis.

All in all, the changes in increased life expectancy are to have reduced the coverage ratio by 4%. As one of the few parameters, the ratio between the capital of active persons and that of pensioners remained constant. This is remarkable, as the capital of pensioners is higher and the first baby boomers are already retiring. Therefore structural risk capacity within the second pillar has not diminished.

Today, 5.81% of the capital is converted into a pension. Although this is lower than the legally prescribed conversion rate for the pension obligation, it is far from an actuarially correct value of 4.87%. This comes with the consequence that part of the pension is not financed and as a result a retirement loss of about 0.3% of the assets is registered annually. This is indirectly borne by the active generation. 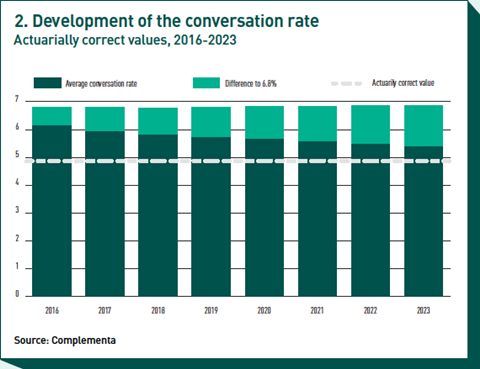 In addition, lower conversion rates lead to lower pensions: A conversion rate of 5.81% means a 15% lower pension compared with 6.8% for the same capital. A drop to 4.87% would even mean a reduction of 28%. According to our risk check-up study, adjustments to the conversion rate to 5.38% are already planned by many pension funds until 2023 (figure 2).

Even if the conversion rates used in real terms are now lower, the measures taken are not yet sufficient. The conversion rate must continue to fall if the non-systemic redistributions of the last decade are not to be cemented. At the same time, the level of performance needs to be discussed. If the level of benefits is to be maintained – without increasing the retirement age – this cannot be done without intensifying the savings process.

The above-mentioned shifts in pension fund investments can also make a contribution as a “third contributor”.

However, it should not be forgotten that higher risks are also accepted. Either way, both pension funds and society face challenges.

1 According to our estimates, the average coverage ratio fell to 106.2 per cent in the first half of the year. However, this article takes into account the final year figures