Tang was previously director of corporate pensions at Lloyds Banking Group. She has also worked as head of pensions at UK insurance company Aviva, responsible for the financial risk exposure linked to its UK and Ireland pension schemes.

In her new role, Law Debenture said Tang would lead Pegasus team with the aim of delivering “cost-effective outsourced solutions for a wide range of clients”.

He joined the asset manager on 16 September, having most recently been sustainability insights director at commercial property development and investment company Landsec.

Russell Investments – Riccardo Stucchi has been named managing director and head of France. He joins the asset manager from BlackRock in Paris, where he was most recently head of the financial institutions group and of business development for France, Belgium and Luxembourg.

Stucchi previously created and led the firm’s practice in southern Europe for five years. Before that, he was in charge of BlackRock’s institutional development in France.

Stucchi will be in charge of driving further growth across the retail and institutional French markets, Russell said. He replaces Michael Sfez, who Russell Investments said had decided to leave the firm to pursue other personal interests.

Investment Association – The trade body for the UK’s £7.7trn asset management industry has named Keith Skeoch as deputy chair of its board. Skeoch is chief executive of Standard Life Aberdeen.

In addition, Andrew Formica, CEO of Jupiter Asset Management, has rejoined the board, having left following his departure from Janus Henderson in 2018. Irshaad Ahmad, head of institutional for Europe at Allianz Global Investors, has stepped down from the board.

PGIM/Jennison Associates – Raj Shant has joined Jennison Associates, PGIM’s fundamental active equity and fixed income arm, as a portfolio specialist to expand the European relationship platform for the firm. Shant was most recently the head of European equities at Newton Investment Management.

QMA – Meanwhile, QMA, another affiliate of PGIM, has hired Kishen Ganatra to its business development team for EMEA. QMA is a specialist quantitative investment manager with $123bn (€111bn) in assets under management.

Ganatra joins from Mercer where he spent seven years, latterly as European strategic research director. Prior to this he worked at Deutsche Bank and Deloitte.

QMA said his appointment was the latest part of an expansion of the company’s international platform. At the start of this year it acquired London-based quant manager Wadhwani Asset Management, now known as QMA Wadhwani. 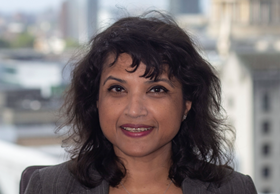 Schroders – The UK-listed investment house has recruited Saida Eggerstedt as head of sustainable credit. She joins from German asset manager Deka Investment where she was head of corporates and financials.

Just Group  – The UK pensions provider has named David Richardson as its group CEO. He has been interim CEO since April 2019 following the retirement of Rodney Cook.

Richardson was group chief financial officer at Partnership Assurance from 2013 until its merger with Just in 2016, whereupon he became deputy CEO and managing director of UK corporate business. He has previously worked for Phoenix Group, Swiss Re and Tillinghast.

Just Group said Richardson would retain his role in charge of UK corporate business as well as interim CFO, which he has held since October 2018.

Amouroux – who will focus on French institutions and family offices – joins from Lyxor where he was part of the exchange-traded fund specialist’s institutional sales team. He has also worked on structured products at Société Générale.

Roemisch has responsibility for German institutional investors and family offices, and was previously at Goldman Sachs where he worked on marketing and distribution for alternatives UCITS funds across Europe.

Scottish Widows – Graeme Bold has joined the UK insurer and pension provider as director of workplace pensions. In his new role he will lead the development of Scottish Widows’ marketing strategy for its master trust and group personal pension products.

Bold was previously director of operational strategy and insights at M&G Prudential, and has also worked at Standard Life Aberdeen as strategy director.

Southall previously spent nearly 13 years at AXA Investment Managers in a variety of business development roles, most recently in its real assets arm. She has also worked for Merrill Lynch, Ernst & Young and Arthur Andersen.

Citrus Master Trust – The £300m multi-employer defined benefit scheme has named Peter Thompson as chair of its trustee board. Thompson is a professional trustee at Capital Cranfield and is a former chairman of the Pensions and Lifetime Savings Association.

Gresham House – The UK-based alternatives specialist has recruited Samia Lone as head of legal. She joins from the Abu Dhabi Investment Authority where she was a private equities lawyer, advising on a range of strategies for the sovereign wealth fund. Lone has previously worked at law firms Ashurst, Proskauer Rose and Morgan, Lewis & Bockius.

GAM – The Swiss asset manager has appointed Florian Komac as an investment manager in its global credit team. He was previously at AXA XL in New York, managing corporate credit for the insurance company, and has also worked for Swiss Re and Activest (now part of Amundi).