Protection against tail risk became one of the primary goals of investors after the financial crisis in 2008. Instruments like options are available but too expensive for permanent protection. Another route is via risk-parity optimisation, and for this purpose a team at Zurich University has developed a risk-parity optimiser that allows investors to model tail risk and tail dependence within a core-satellite framework.

Risk-parity optimisation comes up with better diversification compared with the classical Markowitz optimisation, and does not rely on shaky return forecasts. The main drawback is high drawdowns when bond prices fall sharply and their correlation with other asset prices surges, as in May 2013.

This inherent tail risk of risk parity portfolios can be mitigated with the tail risk parity (TRP) approach recently described by Nobel Laureate Myron Scholes. Zurich University’s TRP takes into account non-normally distributed returns of both the assets and the optimised portfolio, as well as the dependencies of the tails. The returns of each asset are modelled with hyperbolic functions in order to capture non-normal distribution and fat tails in particular. The dependencies between the assets are modelled with copulas in order to measure the specific dependencies of the tails. The risk to be minimised in order to find optimal capital weights for the assets is measured by expected shortfall – the expected loss in the 1% worst case.

The table summarises the results for portfolios consisting of equities (MSCI World), bonds (ML Global Broad MKT 7-10 years) and hedge funds (HFRI), optimised by TRP after presenting statistics for the single assets in the first three columns. The portfolio statistics show the average out-of-sample outcomes for the period from January 2006 to May 2014. For each month, starting in January 2006, returns are calculated, given the portfolio weights optimised on rolling 72-month asset characteristics.

The lower panel of the table provides selected information on portfolios’ capital and risk weightings for August 2008 (the month before the worst financial market crash in September 2008). Monthly transactions for equities and bonds are charged with five basis points, and hedge funds with 10 basis points. 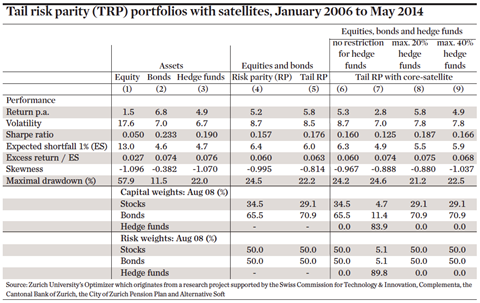 The interesting thing about these results is that, using ‘standard-statistic’ risk parity on the one hand and ‘non-standard statistic’ risk parity (TRP) on the other hand, one might reasonably expect the standard performance measures (like Sharpe ratio) to work in favour of the standard risk parity approach, and non-standard performance measures (expected shortfall) to work in favour of TRP. But columns four and five actually show TRP delivering better results for all measures.

Looking at portfolio weights might give some clue as to why the classical risk parity underperforms the TRP portfolio. The risk parity portfolio had a higher equity exposure (34.5% versus 29.1%) before the crash in August 2008, and a lower equity exposure during the succeeding recovery. These observations are consistent with the view that TRP is more successful avoiding drawdowns and correlation risks. In both portfolios, the risk weights are kept constant at 50%, but with risk defined and measured according to different concepts – volatility for risk parity, expected shortfall for TRP.

Having looked at the core portfolio consisting of equity and bonds only, the next portfolios (columns 6-9) include hedge funds as a satellite asset. According to Zurich University’s optimiser, satellite assets are included and weighted with respect to their return-enhancing and risk-reducing capacity, and they are specified with their alpha and beta vis-à-vis the core portfolio.

However, for many, and particularly very conservative investors, a portfolio with more than 50% in hedge funds is not acceptable. Therefore, portfolios with 20% and 40% maximal restrictions are shown in columns eight and nine. The portfolio with maximal 40% hedge funds has slightly better performance and lower risk, with the exception of the skewness.

Peter Meier is head of the Centre for Alternative Investment and Risk Management; Jann Stoz is research associate and Marc Weibel is lecturer at the School of Engineering, all at Zurich University of Applied Sciences