• GIST (the Green Indian States Trust) is an NGO formed in July 2004 to promote sustainable development in India
• Its first project was to research and publish state-level ‘green accounts’ to encourage alternative measures to GDP growth
• GIST Advisory is a Mumbai-based sustainability analysis specialist
• Its approach emphasises four types of capital: ‘natural’, ‘produced’, ‘human’ and ‘social’

Corporations are facing pressures from governments as well as investors to burnish their ESG credentials. Pavan Sukhdev, CEO of GIST Advisory, in his book Corporation 2020, argues that the model for today’s corporations formed over the past two centuries, is broken.

“Around $1trn a year in perverse subsidies and needless barriers to entry for alternative solutions maintain ‘business-as-usual’ while obscuring its environmental and societal costs,” Sukhdev says. This, he argues, results in social inequity, environmental degradation and political manipulation.

The most extreme advocates of the shareholder maximisation philosophy, such as Nobel prize-winning economist Milton Friedman, argue that company directors have the responsibility to maximise profits. Any actions besides shareholder’s benefit are violations of this duty. Friedman did, however, make a caveat to this argument. He accepted that his criterion is right as long as a firm: ”stays within the rules of the game, engages in open and free competition, without deception or fraud”.

However, such arguments fail to recognise that actions by a firm which damage the environment, as well as social or governance failures, can themselves detract from shareholder value. BP discovered this to its cost.

The UN has acknowledged the importance of the private sector in its 2030 Agenda for Sustainable Development. Corporations can have a massive positive impact for their stakeholders and society at large, and hence the UN Sustainable Development Goals, while still adhering to maximisation of shareholder value. They can do this by upholding recognised standards and principles on the environment, human rights, labour, anti-corruption and so forth. 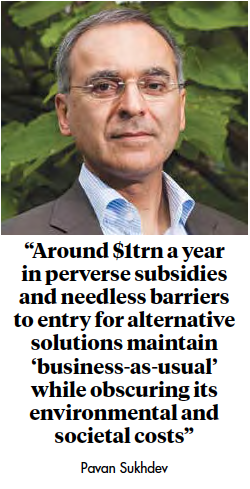 For investors committed to ESG investing, the important question is not what process fund managers might use to select appropriate companies to invest in, but first of all, what information is actually provided by corporations that enable assessments to be made. We are still at the early stage of moving beyond reporting only on shareholder financial capital, although, as Sukhdev argues, we unfortunately live in a world in which many other forms of capital face risks of depletion.

Natural capital is at risk from numerous directions as ‘planetary boundaries’ are rapidly approached and even breached with problems such as global warming, access to clean water or natural forest cover. Social capital is under threat from increasing intolerance and polarisation abetted by irresponsible politics. Human health, the mainstay of human capital, is increasingly damaged by pollution and is even threatened by dietary preferences that drive unsustainable food systems, a main risk factor behind the global burden of disease.

For both investors and corporations to monitor and manage all forms of capital, the first requirement has to be to measure them in an objective and consistent manner. This is where the challenges lie. There have been moves towards establishing a common framework for reporting of ESG-related information, yet there is probably still some way to go before there is universal agreement.

Nachiketa Das, head of research at GIST, argues that the underlying principles are sufficiently widely accepted that similar results should be obtained by different individuals and entities including the leading accountancy firms undertaking ESG-related assessments of corporations. His colleague Anupam Ravi, adds three factors that determine the final figures produced:

• Consistency: ensuring that the framework used is consistent in terms of what is included and what is excluded in the reporting schedules.

• Scope: extent of analysis along the value chain. In the case of Siemens, for example, should analysis include the cost of mining the materials used or just the costs associated with manufacturing?

• Methodology: most consultancies use proprietary methodologies that are not disclosed, but GIST encourages the use of open-sourced peer-reviewed methodologies says Ravi.

GIST’s own framework is based on reporting changes in each of four classes of capital:

• Natural capital: third-party costs or benefits from ecosystem services such as clean air, fresh water, carbon sequestration and so on that are a result of the environmental impacts of an enterprise, in both its operations and its value chain covering areas such as air, water and land pollution or waste generation;

• Human capital: defined by the OECD as the “knowledge, skill, competencies and attributes embodied in individuals that facilitate the creation of personal, social and economic well-being”; and