4
Real Assets: Learning from the crisis

Real Assets: Learning from the crisis

European commercial real estate debt is a compelling investment opportunity. But Gareck Wilson warns that new entrants must consider the lessons learned during the recent downturn, as they provide a valuable insight into the potential pitfalls

The opportunity for investment in the European commercial real estate (CRE) finance market is well recognised. Cushman & Wakefield has reported that 41 debt funds are currently investing (or are open for investing) in Europe, representing potential capital of €22.1bn. The increased competition now evident between lenders has led to some concerns among industry participants of a potential weakening of lending standards. However, there is little evidence available to support this fear. Data from the De Montfort University indicates that there is still a significant buffer between current average LTVs and pricing compared with those at the peak of the market.

In the aftermath of the financial crisis, the CRE finance industry has endeavoured to ensure that lending standards and confidence are maintained, and previous mistakes not repeated, by developing best practice guidelines. For institutional investors considering investment in European CRE debt, these lessons provide a valuable insight into the potential pitfalls in real estate lending. Some of the key lessons are discussed below.

Loosening of underwriting
The decline in lending standards during the early to mid 2000s can largely be attributed to a general loosening of underwriting criteria. From a lender’s perspective, the purpose of underwriting is to minimise the risk of default on a loan and ensure that lenders are appropriately compensated for that risk. In the lead-up to the financial crisis, increased competition among lenders resulted in the use of overly aggressive underwriting assumptions as they sought to compete on terms other than price (such as increased leverage, reduced covenants and increased flexibility for the borrower).

Since the financial crisis, underwriting standards have tightened and the majority of lenders have developed detailed underwriting processes. Lenders recognise that a fundamental understanding of the property, its related cash flows and the variables that influence them is essential, and that responsibility for managing the underwriting process should rest with experienced real estate lenders and that it forms an integral part of risk management.

Who are you lending to?
Many legacy transactions relied too heavily upon the non-recourse nature of CRE lending and did not adequately consider the experience, track record and financial strength of the borrower. This has important consequences for the performance of the loan, particularly when the borrower is also performing the asset/property management function. The financial strength of the borrower is an important consideration, as it ensures that cash is not stripped out of the asset (either directly or indirectly via asset management fees), which may otherwise be required to preserve value through ongoing capital expenditure or the provision of sinking funds.

Lenders now place a much greater emphasis on the strength and experience of the borrower and typically require a borrower to be appointed as asset/property manager under separate agreements on an arm’s length basis (including market-standard fees), which provide the lender with the ability to terminate the appointment via a duty of care arrangement upon certain trigger events (typically a loan event of default). Such arrangements help avoid costly and time-consuming processes to remove intransigent borrowers as asset/property manager.

Valuation
In some legacy transactions, borrowers were permitted to commission the valuation for lending or have a say in the selection of the valuer. This led to ‘valuation shopping’ in order to achieve the highest valuation possible, and potentially underestimated the initial LTV of the loan. 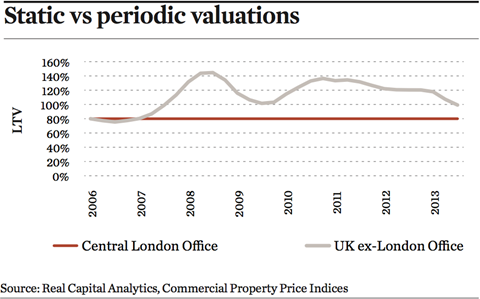 Many legacy transactions also allowed the complete removal of LTV covenants or the requirement for ongoing valuations. This resulted in many of those transactions reporting periodic LTVs based on the original (peak-of-market) valuation, which did not reflect the actual leverage (or mark-to-market position) of the loan as values declined.

The implications of this are demonstrated in the figure, which shows the potential change in LTV that can occur on an 80% LTV loan, originated in 2006 by using a commercial property price index against a static valuation (assuming all other variables remain constant).

It is important that property valuations are commissioned by the lender to avoid any influence by the borrower. Facility agreements should also provide for the lender to commission valuations either annually and at any time following an event of default or suspected material deterioration in value. LTV covenants should also be tested on the basis of the most recent valuation, in order to provide an accurate reflection of the credit risk of the loan.

Cross-border lending
In the competition for loans, many lenders expanded into unfamiliar jurisdictions and, as a result, did not sufficiently understand legal issues relating to the structure of the loan and associated security package.

An understanding of legal issues is particularly important when properties are located in less creditor-friendly jurisdictions such as Italy, France and Germany, as these provide borrowers with significant protection via insolvency or safeguard procedures and may result in costly and time-consuming legal proceedings. In considering cross-border transactions, lenders should ensure they are aware of the potential legal issues, and that they have experienced local counsel to provide advice on potential structures and security packages to mitigate these (normally through offshore holding structures). Alternatively, lenders could underwrite these loans more conservatively in order to avoid default risk.

Will the market maintain discipline? The outlook is positive. Participants in the CRE finance industry recognise the mistakes made in the provision of CRE debt and significant effort has been made, through organisations such as the Commercial Real Estate Finance Council Europe (CREFC) and the Loan Market Association (LMA), to develop best practice guidelines and standardised documentation. Traditional and alternate lenders have focused on developing more robust underwriting and risk management procedures to ensure that best practice is enshrined within their organisations and that the issue of risk management is treated as a priority, rather than a hindrance.