7
Real Assets: The sting in the loan tail

Real Assets: The sting in the loan tail

Estimating the performance of infrastructure debt instruments has become a recurring question for both long-term investors and prudential regulators. In a new paper, we propose the first robust valuation, risk measurement and data collection framework for private infrastructure project loans.

We focus on those performance measures most relevant to investors at the strategic asset allocation level and prudential regulators for the calibration of risk weightings, including expected loss, expected recovery rates, loss given default, value-at-risk (VaR), expected shortfall or CVaR, duration, yield, and z-spread. We also determine parsimonious data collection requirements. Hence, we can realistically expect to deliver these performance measures at a minimal data collection cost.

Marking to business models
As for any security, the valuation of infrastructure project finance loans consists of modelling or observing cash flows and deriving their present value. However, cash-flow data for large samples of projects, spanning entire lifecycles, are not available.

Thus, we must proceed in two steps: we first model the cash flows of generic but commonly found infrastructure project financing structures and calibrate these models with existing data, allowing for new calibrations when larger datasets become available.

Second, given a generic cash-flow model, we build a valuation model to derive the relevant return and risk measures. So we are effectively marking to a business model that reflects the available knowledge of private infrastructure project credit risk today.

This exercise also yields the list of data points that need to be collected to update and better calibrate this model and improve our knowledge of the performance of infrastructure debt.

We show that documenting the dynamics of the debt service cover ratio (DSCR), in combination with information about initial leverage, covenant triggers and the size of the loan’s ‘tail’ (the difference between the original loan maturity and the life of the project) is sufficient to derive key credit risk metrics in infrastructure project finance, including default frequencies and distance to default.

In terms of data availability, we know that DSCRs are typically monitored and recorded by infrastructure project finance lenders, as is the base-case debt service at financial close.

We focus on two families of financial structures: merchant infrastructure (projects that generate revenue by selling their output or service in a market, and hence are exposed to commercial risks, such as a power plant or toll road); and contracted infrastructure (projects that receive contracted revenue in exchange for providing a pre-agreed output or service, such as a school, hospital or ‘take-or-pay’ energy project, and bear little to no market risk).

These two types of project structures correspond to different underlying business risks and, as a consequence, are structured in different ways. Merchant infrastructure projects are structured with a rising mean DSCR and a longer tail. A rising DSCR implies that lenders get paid faster than equity owners, and a longer tail increases the value of lenders’ security. In other words, lenders demand an increasing mean DSCR and a longer tail to protect themselves against a higher and increasing cash-flow volatility, which results from higher revenue risk.

In contrast, contracted projects are structured with a flat DSCR and shorter tails, as lenders demand less protection against default, due to lower expected underlying revenue risk.

Of course, other generic infrastructure project-financing structures exist, even though they tend to be a combination of these two types.

The value of the tail
Combined with the base case debt service, the distribution of the DSCR in generic projects can also be used to infer the expected value and volatility of the cash flow available for debt service (CFADS) of a typical infrastructure project.

However, the base case determined at financial close can change following a breach of covenant or a hard default, leading to the restructuring of the debt schedule and its extension in the loan’s tail. To take into account these potential changes in the debt schedule and value the tail, we model the debt renegotiation process to determine the outcome of restructuring after either a technical (covenant-driven) default or a hard default (of payment). A new debt service is determined by taking into account what each party would lose in the absence of a workout.

Thus, we can determine the cash flows to infrastructure project creditors in every future state. To value these cash flows, we take a so-called structural approach and develop a version of the Merton (1974) model that takes into account the characteristics of infrastructure project finance debt, and combine value of the debt service in different states by adapting the Black and Cox (1976) decomposition to the case of project finance workouts.

Using Moody’s definition of default in project finance – by which each loan is only allowed to default once – our model predicts marginal default frequencies in line with reported empirical averages: trending downwards from just under 2% at the beginning of the loan’s life to almost zero after 10 years, in the case of merchant infrastructure, and flat at 0.5% for contracted projects such as public-private partnerships (see figure 1). 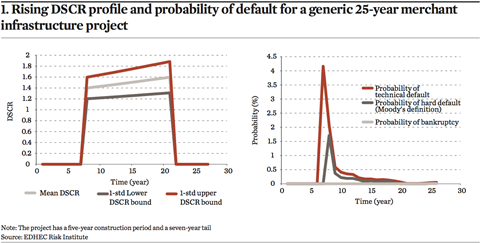 Overall, risk levels are found to be relatively low and recovery relatively high: expected loss never rises above 2%; VaR and CVaR, while they increase towards the end of the loan’s life as the value of the tail is exhausted, never reaches levels higher than 6% and 10%, respectively; expected recovery rates are always in the 80-100% range.

In the case of merchant infrastructure projects, the probability of both technical and hard defaults, and of hard defaults only (Moody’s definition) shown on the top-left chart in figure 2, falls sharply post-construction, while expected and extreme (VaR, cVaR) losses tend to rise throughout the loan’s life. Similarly, in the case of contracted infrastructure projects, while probability of default stays almost constant during the loan’s life, the severity of losses rises with time.

The diverging trends in the distribution of defaults and losses are a consequence of debt restructurings upon defaults. Even if defaults are concentrated in a certain period of time, debt restructuring spreads losses over the entire life of the project. Hence, losses tend to increase with time, as the cumulative number of defaults (and hence restructurings) accrue losses near the end of loan’s life. However, part of the losses suffered during the loan’s life are recovered in the loan’s tail, thus reducing overall expected losses.

The size of losses for both DSCR families is primarily influenced by lenders’ exit value net of exit costs. Exit costs determine the aggregate loss of value (debt+equity) if the debt owners take over the project company upon a hard default and do not renegotiate with the original equity investors. The higher the exit costs, the lower the value that lenders can obtain by taking over the project company after a hard default, and the lower their bargaining power in negotiations with original equity holders.

Hence, lenders may have to suffer losses even in otherwise low-risk projects like contracted infrastructure because replacing the equity owners upon a hard default, while it is in their power, can be very costly.

As a consequence, ongoing monitoring of the special purpose entity (SPE) is required in order to avoid having to contemplate exercising the option to exit; in particular, technical default triggers (such as a low DSCR or loan-life cover ratio) allow lenders to intervene and maximise their recovery rates long before more expensive options to restructure, sell or liquidate the SPE ever arise.

Finally, our approach also allows us to derive expected returns and yield measures and highlights the fact that the ability to reschedule debt upon technical and hard default creates a trade-off between credit risk and duration risk (figure 2). That is, to reduce the credit losses upon default, investors have to extend the maturity of their loan further in the tail, and have to bear a higher interest rate risk due to a higher duration. 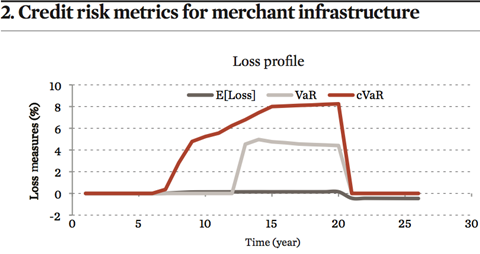 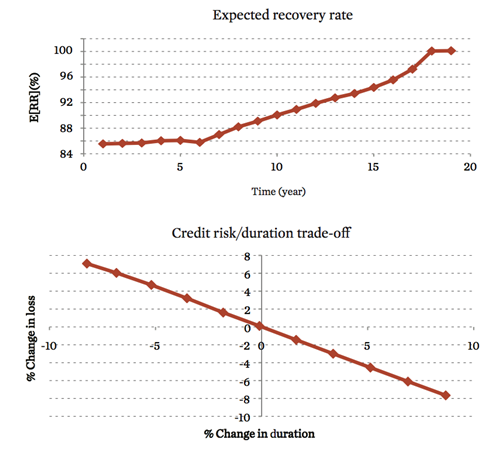 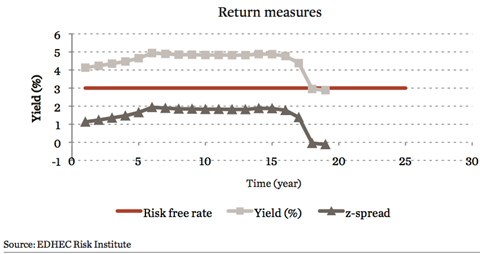 Next steps
Thus, with a parsimonious set of inputs that consists of the parameters of the DSCR distribution across different types of generic projects, the base-case debt schedule and a number of variables defined in the covenants at financial close, infrastructure project finance loans can be valued at any point in time, and their risk-return profile can be constructed spanning the life of the loan.

Our paper delivers the first three steps in infrastructure investment: defining the most relevant underlying financial instrument, designing a valuation framework that is adapted to its private and illiquid nature, and the determination of a standard for data collection and performance reporting. Next steps include active data collection to better calibrate our model of  dynamics, before moving to the portfolio level of the analysis, towards long-term investment benchmark in infrastructure debt.

Frédéric Blanc-Brude is research director and Majid Hasan a research assistant at EDHEC Risk Institute-Asia. This article draws from Investment and Governance Characteristics of Infrastructure Debt Instruments, from the Natixis research chair at EDHEC-Risk Institute