10 years since Lehman: Is asset management the next threat to financial stability?

3
Reflections on the crisis

Reflections on the crisis

IPE canvassed the views of leading economists and politicians on the post-Lehman crisis regulatory and policy response, and on the impact of the crisis on the global financial system

One thing I would like to see is a requirement that the financial sector have much greater equity. That’s part of financing banks and financial firms. There’s a book by Anat Admati and Martin Hellwig about this [The Bankers’ New Clothes, 2013]. And I think having financial firms have a little skin in the game instead of 30,000 pages of regulations is a cleaner, more elegant way to do things.

But the larger picture is that if you look at the history of financial crises, as Carmen Reinhart and I have done, there’s always this political cycle where, after the crisis, politically and in regulations… it overshoots. It’s not necessarily good, but it overshoots. The regulation’s needed, and then over time, over a long period, usually decades, it gets chipped away until it’s fallen so far you get the next crisis.

We do seem to be having this happen at hyper speed in the United States at the moment. So, the regulations have been rolled back. But they’re not being replaced with better ideas. The normal cycle of these things is many, many decades. There is a heightened risk when you roll back regulations this fast that you can have a problem.

First of all… we made part of the financial system safer and more resilient with more liquidity, less leverage, more capital, [and] some restrictions to the activity of the financial system. Of course, one of the side effects is that some of the market makers are not there and maybe there’s been some reduction in liquidity. I think the risks are not because of the regulation, but […] there has been a massive issuance of credit instruments in private and public debt. The leverage ratios have not gone down, they have gone up. 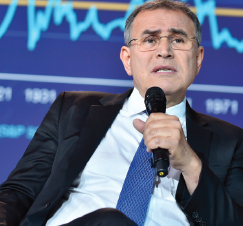 So there’s been this issuance, and the issuance now is through capital markets as opposed to traditional banks. And the capital market has gone into credit funds. Specialised credit funds tend to be open-ended, where you are investing you are investing in fixed income that is illiquid […] and so on. But being open-ended, anybody can redeem them essentially overnight. And of course, in a situation of stress, as we have have discovered there are fire sales and all the types of systemic effects that can occur.

Joseph Stiglitz, professor in economics, Columbia Business School; author of The Euro: How a Common Currency Threatens the Future of Europe (2016); recipient of the Nobel Prize for Economics (2001); chair of President Bill Clinton’s Council of Economic Advisers (1995-97); chief economist at the World Bank (1997-2000) 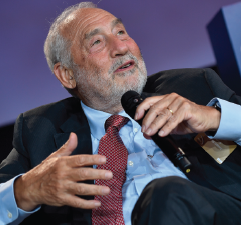 The liquidity that you really care about is liquidity in prices. And the regulations are trying to ensure that first of all, we’ll have fewer crisis. And secondly, when we do have crises, that we’re in better position to deal with it. So in my mind, regulations were moving totally in the right direction. They didn’t go far enough, and I’m very disturbed about the roll back in these regulations.

With the benefit of hindsight what is your take on the Lehman crisis, in particular in relation to how Europe reacted?

Not only Europe but the rest of the world took some lessons out of the Lehman crisis to get a more sustainable and stable financing system. I’m not sure if we were really able to overcome the difficulties. Still today in Europe we have some difficulties with some banks but I would say that on average we came through these difficult times.

So is one reason you support further integration to put Europe in stronger position to better able to deal with a financial crisis? 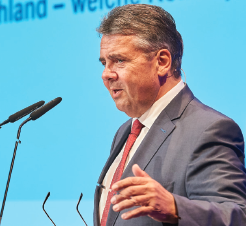 There are different reasons why I support our currency union. If you compare it to other currency unions around the world our position is not so bad. Our debts are lower than, for example, the Americans or the Chinese. For us in Europe the currency union was an instrument to have closer integration of the European member states.

Of course we see that for the time being we are at the end of “ever closer union”. That’s not something that can be developed over the next years but the currency union made Europe more competitive to other regions. But some countries, look to Italy, look to Greece, are still suffering turbulence.

Was it a mistake to bail the banks out, or should they have been bailed out in a different way?

I think the Americans did it reasonably well. Of course they saved their financial system and the banks but in the end the institutions had to repay the money. On the other hand, looking back, I think we [in Germany] managed the crisis in the way where we saved, for example, our country’s savings banks, it was a very stable situation. We came through the crisis without rising unemployment. We had good cooperation between politicians, companies and the trade unions to overcome the difficulties. So this idea of the social market system was maybe the main reason this country, Germany, came out of the financial crisis relatively rapidly.

C ould things have been done differently? For example, on the economic front or to minimise the rise of populism?

In this country the rise of populism is much more linked to the migration crisis we had in 2015. It was not so strongly linked to the financial crisis.

Theo Waigel, Germany’s finance minister (1989-98) and leader of Bavaria’s Christian Social Union party (1988-99). He played a key role in German unification and in the creation of the euro. Waigel was also one of the signatories of the 1992 Maastricht treaty, the agreement that officially founded the European Union.

What is your perspective on the Lehman crisis with the benefit of a decade of hindsight?

I think the world has done much and now we are in a better situation than 10 years ago. The banks are better capitalised and there is better supervision. In Europe the consolidation of the banks in difficult countries is progressing. And we have new instruments such as the European Stability Mechanism, as well as better macroeconomic cooperation in the EU member states. 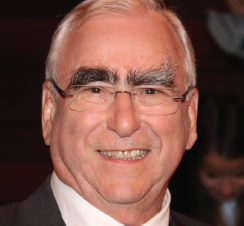 Would you blame the rise of populism in Europe, at least partly, on the financial crisis and its aftermath?

That’s true in almost all countries. We have seen it in France, in Germany, in the Netherlands and in Finland. But none of these countries has changed their European policy and that makes me hopeful.

So you mean, as in Italy, there are significant eurosceptic parties but none of the countries have left the EU?

A few years ago some politicians advocated it but now I think it will not be implemented. The state president of Italy acted responsibly when he refused to support the appointment of an anti-euro finance minister.

I understand you are staunchly pro-EU but do you think there is scope for it to be reformed?

It is necessary. We need more cooperation in the defence sector. We need more cooperation in the development sector. It’s good to strengthen the institutions of the European Stability Mechanism. That is necessary and that is good. The euro-zone is built on treaties and these need to be respected. That is a pre-condition for maintaining trust. We have to explain to all our partners that it was a problem 15 years ago when the Stability Pact [fiscal rules] was broken not only by France and Italy but also by Germany. I don’t think that helped the stability of the euro-zone. Now I think all countries have learned from that experience.

10 years since Lehman: Is asset management the next threat to financial stability?