Regulators and central banks are realising that in the asset-backed securities (ABS) market they have an ally in revitalising the European economy. Attitudes have shifted from a few years ago when the ABS market was subject to a punitive regulatory environment.

Ed Panek, the head of ABS Investment at Henderson Investment, says: “The European ABS markets are starting to head back to normality. But there is still some way to go. Publicly placed new issuance in the first quarter of 2015 was at its highest level since 2007.”

However, most of this new issuance has been concentrated in Dutch and UK residential mortgage-backed securities (RMBS) or German auto loan receivables. David Brealey, the head of European ABS at Conning Asset Management, says the outlook for new issuance in 2015 implies a shrinking market. The actions of the central banks, which have proved both confusing and counterproductive, have not helped. Perceptions have changed as regulators have realised that the US sub-prime-induced financial crash was not reflected in the experience of the European ABS market. Regulators have also realised the potential benefits of securitisation markets. “Last December, the Basel III regulations were relaxed somewhat with less punitive requirements for securitisations,” says Panek. “The European Commission also is in the market with a discussion paper regarding a framework for ‘simple, standard and transparent securitisations’ that will hopefully have more favourable regulatory capital requirements.”

Panek says that Solvency II and Basel III still make securitisations unattractive investments for the insurance companies and banks that used to be large market players. In addition, he points out there is a significant difference between regulators in Europe and those in the US. “The US is generally more lenient than Europe,” he says. “For example, under Solvency II, European insurance investors have to be able to confirm that the 5% retention required of originators is maintained throughout the life of a transaction whilst in the US it may only be for a period.”

European central banks have realised the usefulness of securitisation in helping to achieve their objectives. The European Central Bank (ECB) and the Bank of England argued in a 2014 paper that securitisation, if appropriately structured and regulated, can complement other long-term wholesale funding sources. This includes for small and medium-sized enterprises (SMEs). However, Brealey questions its usefulness for smaller firms. “There are a number of other funding sources apart from banks and we don’t hear much about SMEs suffering from a lack of funding,” he says.

Securitisation does fit in with another policy objective of central banks. That is to increase bank lending within the European economy, which is, unlike the US, heavily dependent on bank rather than capital market funding.

“European ABS markets are starting to head back to normality. But there is still some way to go”
Ed Panek

However, Shammi Malik, head of European ABS trading at Stormharbour Securities says the ECB’s attempts to stimulate the ABS markets through the ABS purchasing programme (ABSPP) have not worked. “The decision to include ABS under the QE [quantitative easing] programme has caused a lot of confusion in the market as investors thought this would stem the financial crisis and lead to higher ABS issuance,” he says. “The reality is, unlike with covered bond purchases, in which the ECB was experienced and which are bought directly by the euro-system national central banks, this was not the case for ABS bonds.”

Malik says the difficulties were highlighted by the delayed start in November 2014 compared with the covered bond purchase programme (CBPP3) in October. The appointment of five external managers to conduct purchases was an indication of the challenges involved.

• Market sentiment towards asset-backed securities (ABSs) in Europe is picking up.
• The regulatory environment is becoming less onerous but it is still weighted against ABS.
• Central banks are publicly declaring support for ABS, particularly in areas such as the euro-zone periphery and securitisation for small and medium businesses (SMEs).
• The ECB’s ABS purchase programme has not worked as intended.
• The ABS markets would benefit from a less onerous treatment by regulators.
• It would help if more conservative institutional investors became comfortable with the ABS marketplace.

The ECB has highlighted ABS programme eligibility criteria to automatically include senior bonds with two credit ratings of at least A/A-. It also includes all those down to investment grade subject to meeting a list of over 30 criteria.

Unfortunately, there is no independent body responsible for monitoring compliance. Instead, investors are reliant on rating agencies and transactional changes. Sometimes the existing framework has proved positive. For example, the uplift in the country ceiling for Portugal led to a raft of upgrades and automatic eligibility. In other cases, some mortgage-backed securitisation (MBS) bonds, mainly from Spain, have been excluded once it became apparent they did not meet the necessary criteria. 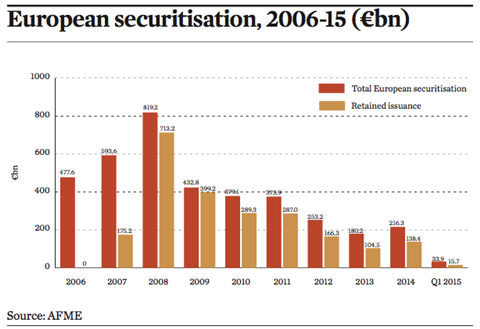 The implementation of the ABSPP has proved controversial. “The ECB appointed managers to purchase bonds on their behalf, but requires them to produce a 30-page report for each request, which takes two weeks to process,” says Malik. “In the case of covered bonds, the process takes just a few hours.”

One consequence is that the ECB only purchased €5.8bn of ABS paper in the programme’s first five months. This contrasts with the purchases of covered bonds of about €3.5bn a week. Malik finds it surprising about despite an abundance of eligible peripheral bonds the ECB purchases have concentrated on Dutch RMBS, a part of the market that requires no assistance. The resultant crowding out and spread tightening has led investors to flee the sector. Spanish MBS is one of the largest segments of the market and yet it has had no new issues since the launch of ABSPP. Even in other peripheral euro-zone jurisdictions the ECB’s purchases of ABS have worked poorly. For example, Banif’s Portuguese RMBS ATLAM 3 suffered a scaling back with the senior bonds being placed almost 50 basis points wider than where the issuer’s other two issues were trading pre-placement. While the ECB’s actions are well intended, it needs to increase transparency and explain its objectives. 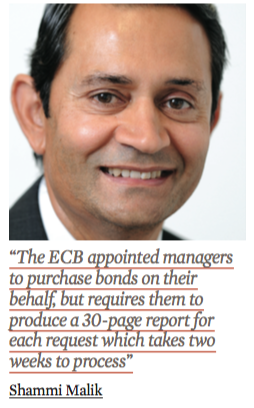 An unintended consequence of the policy is a drying up of liquidity in the secondary market. “A lot of ABS bonds jumped up in price in Q4 2014 as investors tried to front-run the ECB – the spread tightening has been staggering,” says Malik. Investor interest has shifted to non-eligible bonds but the danger is that liquidity will dry up and spreads widen. “The ECB will hold bonds to maturity, but a lot of other investors need liquidity and the ECB has reduced that.” The long-term implications could be negative as market-makers withdraw from a market they find too small and too illiquid to operate in.

The European ABS markets are struggling against their treatment by regulators, the paucity of new issuance and the technical tightening of spreads not backed by fundamentals. “In the UK, prime RMBS is very tight because there is little new issuance with the Bank of England’s lending programme still in place,” says Malik. He adds that most new MBS issuance has been in non-conforming RMBS, which as a result has seen weakness not justified by fundamentals. 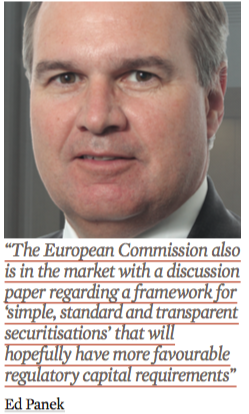 Ultimately, all the problems that afflict the European ABS markets are interrelated. They will only be overcome by an even-handed treatment by regulators and improved perceptions by central banks. Increased issuance and wider spreads should be the result.

Fulfilling central bank policy objectives, particularly in terms of increasing credit flow to peripheral European economies, is a problem that needs solving. To do that may require more conservative institutional investors to become more comfortable with the ABS marketplace as a whole. Perhaps they should also be more willing to utilise the expertise of ABS specialists in the more esoteric markets that hedge funds, family offices and high net worth individuals have traditionally used as their hunting grounds. Whether that will ever happen is debatable.