2
Renminbi on path to currency standard

Renminbi on path to currency standard

“Every great country has a great currency,” according to Robert Mundell, the architect of the euro. China’s renminbi looks poised to displace the dollar and dominate the twenty-first century world of currencies but the dynamic behind this transition and the key factors that underpinned the dollar for so long need to be understood.

In practice, global currencies do not so much fail as they are eclipsed by a stronger competitor. And America’s great success in recent years owes much to keeping currency competitors away.

The former is when US President Richard Nixon dramatically halted the dollar’s convertibility into gold and effectively ended the post-war Bretton Woods fixed exchange rate system.

The second date, which is as mysterious as the agreement itself, signals the start of the oil exchange standard (OES). This underpinned the dollar as the key standard of value in the world economy.

The OES emerged from a secret deal negotiated between America and the Saudis by former Salomon Brothers partner Bill Simon. In return for Saudi Arabia pricing oil and accepting payments solely in dollars (and implicitly agreeing to re-invest much of the proceeds back into US Treasuries), the US offered military hardware and external military support. The other Organization of the Petroleum Exporting Countries (OPEC) nations quickly nodded through the Saudi lead. The deal was never publicised. The US Treasury deliberately hid Saudi purchases of US government debt, using the obscure ‘add-on’ facility at bond auctions. These purchases today may total about $350bn-$400bn (€290bn-€330bn) but possibly far more.

Whereas the gold exchange standard (GES) lasted, in effect, from 1945 to 1971, or 26 years, the OES has, so far, lasted 43 years, or almost twice as long. Its length underscores its importance because the OES has been as critical for US capital as the GES, and arguably even more so.

The OES underpins the dominance of the dollar in the global financial system, and the OES, in turn, has significantly influenced the broad direction of US foreign policy since 1974. However, events may be changing, triggered by the rise of China and the on-going substitution of US shale for Saudi oil.

Too many in the West still underestimate China’s potential. China is the world’s largest trading nation. It dominates the demand for key commodities such as copper. Its economy in real PPP terms is now larger than that of the US; its credit system is already equal in size and its central bank, the People’s Bank, is one-fifth bigger than the mighty Fed. China’s pool of liquidity barely accounted for 6% of the global total in year 2000, but since then it has soared by over 14-fold to reach parity with the US and the euro-zone. 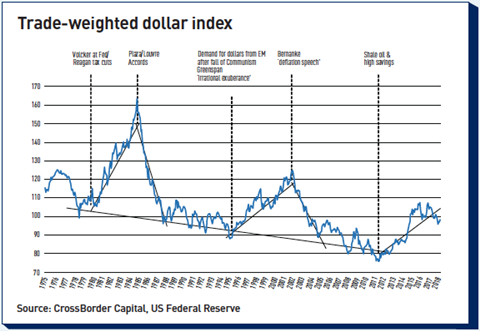 Throughout history, economic power is reinforced by the generation of seignorage – the ability to sell debt to others and ultimately pay for any balance of payments deficit with your paper money. For example, the dollar circulates globally as the chief vehicle currency and is widely held as a store of value, rather than being redeemed for another unit or swapped for gold.

China not only wants to join this reserve currency club. It wants to dominate it, ultimately unseating the dollar and specifically driving American power out of Asia in the near term. Although the US rightly fears China’s geopolitical ambitions, many have been lately surprised that China is largely pursuing this policy by economic rather than military means. We call this policy the Beijing Consensus.

At the centrepiece of the Beijing Consensus is the $4trn Belt and Road Initiative (BRI), the huge (multi-Marshall Plan-like) infrastructure programme that embraces Central Asia.

The ambitious scheme touches 68 nations populated by 4.4bn people. Taking prevailing World Bank estimates of the income elasticity of infrastructure spending, this programme could easily expand regional GDP by 35-40%. Taken over a quarter century it would add 1-1.5% annually to pan-Asian growth.

The BRI is not just a geopolitical route, but it is also the path that points to the rising importance of the renminbi. Nations along this new financial silk road will increasingly borrow and trade in renminbi. China’s policy banks (for example, the Asian Infrastructure Investment Bank) are already active in granting loans, much as the US money centre banks did to finance Latin America’s infrastructure programmes in the 1960s and 1970s.

By earlier example, Britain established the pound sterling as the common standard of value across its expansive nineteenth century empire and later sustained it through the system of imperial preference. London’s financial markets grew fat on reinvesting these flows.

“Nations along this new financial silk road will increasingly borrow and trade in renminbi. China’s policy banks are already active in granting loans, much as the US money centre banks did to finance Latin America’s infrastructure programmes in the 1960s and 1970s”

Looking back, the dominance of the dollar and Wall Street both rested on the GES and later the OES. Despite many persistent warnings from economists for decades that America’s economy was declining as a share of global output, they entirely missed the point that, throughout, the role of the dollar was paradoxically getting bigger as many newly emerging economies shadowed the US unit. Now these same economies – for example, the Philippines – are turning towards China.

China, joined by ‘sanctions’ outcasts, such as Russia and Iran, and tacitly encouraged by Europeans that have been heavily fined by the US authorities for abusing their dollar transactions, are all actively working to break the dollar monopoly. This means deliberately undermining the OES, a task now more easily achieved because China is a substantial buyer of Middle East oil and Russia has taken an important initiative in the Syrian conflict.

Russia already trades oil for renminbi with China. The latest twist involves the ‘on-off’ planned privatisation of Saudi oil giant Aramco. Internal fiscal pressures compel the Saudis to sell but as the odds of a public sale diminish the likelihood of a private sale increases and it seems highly probable that a Chinese entity will ultimately stump up the cash.

The price for this face-saving deal will likely involve some concessions on pricing oil in Chinese renminbi. Perhaps in anticipation, on 26 March 2018 trading started in a renminbi-denominated oil contract on the Shanghai futures exchange. This might prove more important than the on-going scuffles in a tariff war. Its success needs to be closely watched, because it may signal the turning point in the global dominance of the dollar and ultimately in US power. President Trump should be rightly concerned.

The dollar remains the ultimate barometer of American power. The loss of the oil market may not be fatal, but at $800bn year of cross-border trade, it is significant. Other commodities will surely follow the petro-renminbi, perhaps staring next with copper and gold, where the Shanghai futures exchange is already a volume leader. One inevitable result is that the vast pool of dollars held offshore by commodity producers and hedgers, itself oft-used to fund Western banks through the LIBOR rate, looks in real danger of serious decline. Coincidently, LIBOR has been spiking over recent weeks.

We acknowledge that it may still take decades until the renminbi unseats the greenback. After all, America eclipsed the British economy in size in about 1870, but it then took the dollar until the 1950s to dominate sterling. On the other hand, every journey begins with a single step and China’s renminbi is definitely stepping out.

Michael Howell is the managing director of CrossBorder Capital