The question that accounting standard setters around the world have resoundingly failed to answer is this: what is the magic number that captures a business’s performance? The International Accounting Standards Board (IASB) has conceded with its Primary Financial Statements (PFS) project that now is the time to face up to the proliferation of non-GAAP (generally accepted accounting principles) reporting metrics that now proliferate and bring some discipline to them within International Financial Reporting Standards (IFRS).

Coming at a time when observers are increasingly questioning whether financial statements truly reflect the value of businesses to investors, there is a risk that it will undermine traditional accounting metrics such as profit or loss.

In fact, it was apparent during the IASB’s December meeting that some board members are keen to constrain the measure to prevent a free-for-all. In particular, the fear is that if the IASB allows preparers to introduce any old number into the financial statements, it will elevate a non-IFRS number to the status of an IFRS-approved one.

But what is an MPM? So far, the IASB has done a better job of saying what it is not than what it is. What we can glean from the board’s discussions so far is that it is a summary financial measure of a business’s financial performance. The board is also clear that it cannot be a non-financial measure such as a market share or a metric for staff turnover – nor is it forward-looking information such as a sales projection.

Meanwhile, the board’s decision in December that entities should present a MPM in their financial statements was hedged with a number caveats and qualifications. IASB members said that if the MPM fails to meet the requirements in

IAS 1 for sub-totals, management should provide it in a separate reconciliation at a location yet to be agreed in the financial statements.

There are several outstanding questions, some of which are fundamental. First, IASB members have already acknowledged that they have yet to decide when an MPM will be required. Second, in relation to that separate reconciliation, they also need to decide whether it should go below the balance sheet or disclosed in the notes. 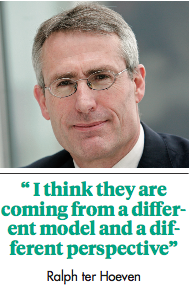 At its June meeting, the staff proposed requiring businesses to report an MPM in its financial statements if it presents the measure in its annual report. The feeling among staff was that it would be challenging to have a wider requirement than this because it would be difficult to enforce and audit. Moreover, it would force auditors to opine on a matter that they would not normally audit.

As IASB member Anna Tarca puts it: “Some people will choose to have them within the income statement and others will choose not to. That will make the issue of the reconciliation very important. I think that there are helpful performance measures that companies use, and that is why they need a degree of flexibility about where they present them.”

At the heart of the drive to report an MPM, somewhere in the financial statements are two competing objectives. The first is to corral the MPM in the financial statements so that it will be subject to greater transparency and audit. Potentially, this could give users greater assurance about the adjustments and amounts used to determine the measure. Competing against this objective is the view that the MPM will give users the ability to assess the persistence or sustainability of an entity’s financial performance.

“What is an MPM? So far, the IASB has done a better job of saying what it is not than what it is. What we can glean from the board’s discussions so far is that it is a summary financial measure of a business’s financial performance”

But going back to the issue of a reconciliation, the big as yet unanswered question is this: reconciliation to what, precisely? So far, the discussion at board level has been framed in terms of maintaining the integrity of IFRS performance measures as the ultimate yardstick for business performance.

However, the IFRS numbers have neither more nor less integrity than their inputs. And nowhere is this more apparent than with defined-benefit pensions – certainly in Europe. You might recall that back in 2014, the IASB’s interpretations committee canned its bid to develop accounting guidance to address the measurement challenges presented by defined benefit (DB) plans with a guaranteed minimum return.

Given that these plans proliferate is Germany, it was unsurprising that the request for guidance came from the German national standard setter, the DRSC. The teaser posed by the German standard setter involved a notional pension promise of 1,000 currency units (CU) plus the higher of any investment return, subject to a 2% guarantee.

This request was, in fact, the third attempt inside a decade to fix intermediate-risk plans under IAS 19. The IASB tried and failed in 2008 with its discussion paper. That bid was hot on the heels of the  stalled IFRIC D9 approach. And so few were surprised when the committee admitted that it could not tackle the German question without addressing measurement under IAS 19.

So for those jurisdictions where the IAS 19 number lacks relevance, the question is whether there is any point in reconciling management’s preferred measure of performance back to an IFRS number that includes what is often a hugely material – and arguably defective – IAS 19 calculation.

A Dutch pensions accounting specialist who sat on the working group, Ralph ter Hoeven, neatly summed up the challenge: “What’s really magic is the DB calculation,” he quipped. “It’s not only magical but they have to put it in their financial statements as well. They come from an environment where they have to fund.… and I think why they consider the re-measurements as ‘other’ is that basically they are forced into a DB model.… So I think they are coming from a different model and a different perspective.

If nothing else, the inclusion of an MPM in the accounts should fuel the debate over the relevance of financial reporting. Who knows? Perhaps management really does know best.