Perhaps 2021 will be the year when it finally sinks in. The economic crisis associated with COVID-19 looks set to have a substantial impact on the labour market. This development, in turn, is likely considerable effect on pension provision.

Perhaps the medical aspects of the crisis have fixated the world so much – for understandable reasons – that the scale of the economic slump has not been fully appreciated. Job retention schemes have also helped cushion the blow so far. But it should be remembered that, even according to the IMF, it is the greatest economic crisis since the 1930s. And that decade was, among other things, scarred by the tragedy of mass unemployment. This time around, it is unlikely governments will allow unemployment rates to reach such high levels but there is still a considerable challenge ahead.

The key contours of the trend are already apparent in the arid world of numbers (figure 1). According to the EU’s autumn 2020 economic forecast the unemployment rate across the region looks set to increase from 6.7% in 2019 to 7.7% this year, before rising to 8.6% in 2021. In other words, unemployment looks set to continue to rise once job-retention schemes are wound back.

But these are only the headline numbers. In addition to unemployment, there is likely to be even further job insecurity. Some sectors – such as retail, tourism and hospitality – are likely to be hit particularly hard as are some segments of society. Nor is it clear how long it will take to contain the virus, despite many hopeful signs around vaccine development. Even in the best case scenario, it looks certain that the economy, and consequently the labour market, will take a heavy hit.

Under such circumstances, it would be a miracle if pension provision was not hit hard. For one thing, government resources to pay for state pensions are likely to be even more constrained. Debt levels have surged as the authorities have struggled to contain the pandemic. Sooner or later, governments will have to start reducing their debt. 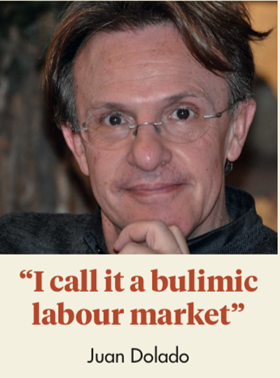 In relation to private pension provision, many will have either reduced their contributions or, if they are able, stopped them completely. Even those with substantial pension pots will, in some cases, draw them down. And employers are likely to rethink the benefits they provide to workers.

The challenge to the labour market of course varies across different countries and different segments of society. These differences will be sketched first before looking more closely at the different channels through which pension provision could be affected.

Labour markets across Europe
It is often claimed that European labour markets can be sharply contrasted with those of the US. Europe, it is commonly said, has a relatively ‘rigid’ labour market, whereas the US is much more flexible. Rigid in this sense – although often used in a pejorative way – is meant to suggest it is relatively difficult to make workers redundant and extensive social benefits are available.

However, this counterposition between the US and Europe is a misleading one. There is, in fact, a huge amount of variation across Europe in general and even within the euro-zone (figure 2). This applies to the headline unemployment figures but also to the structure of the labour market.

Juan Dolado, professor of economics at the Universidad Carlos III de Madrid, says that job volatility in Spain is three times the level of that in the US. A high proportion of employees are on fixed-term contracts, so their positions can easily be terminated once their contacts end. There is, therefore, huge job creation in good times and huge job reduction in bad times. “I call it a bulimic labour market,” Dolado says.

In Spain he foresees a great rotation in the labour market following the pandemic. Following the last economic crisis – when Spain’s housing bubble burst – many of its young people switched to working in the service sector and especially tourism. But this is precisely the sector that the epidemic has hit hardest.

Germany is the archetypal opposite end of the scale in terms of a rigid labour market. Given its strong manufacturing base, there is a particular emphasis on maintaining a large core of skilled workers, even in bad times. That is why it has long had short-time working schemes (Kurzarbeit) in which employees’ hours are reduced rather than them being laid off.

Michael Burda, professor of economics at Humboldt University in Berlin, says how well such schemes work this time around will depend on how the crisis pans out.

If the resolution to the pandemic is relatively smooth it should work well. “The German system is very amenable, with its short-time working and heavy social security, for people who are temporarily out of work,” Burda says.

However, there is a down side. The system is not so well adapted if it turns out that the resolution to the crisis proves more difficult and structural economic change is needed. In such a situation, short-time working schemes can end up shoring up sectors which are no longer viable. Burda points to the earlier experience of trying to maintain unviable production after the dissolution of East Germany. “You can end up preserving Trabant production when you should really be just shutting it down,” he says.

Shortly after the pandemic hit Europe, the EU introduced its SURE scheme (Support to mitigate Unemployment Risks in an Emergency) to provide financial support for short-time working schemes. Essentially, this can be seen as an attempt to introduce a more German-style labour market across Europe.

Although EU member states already had such schemes in place, the SURE scheme was meant to give them additional financial backing. The European Commission borrowed on the markets to support such schemes. By mid-November it had raised over €90bn and covered 18 member states. However, the labour markets in Europe are still a long way from being uniform or fully integrated.

The impact on pensions
There are many ways in which both pension schemes and pension provision will be hit by the COVID crisis. For one thing, average investment returns are likely to fall as the trend rate of economic growth falls – since investment returns are ultimately claims on real economic activity. “We are going to be a slow growth world, says Andrew Milligan, an independent consultant. “This is not going to be a world of 5% growth every year.”

There are also the well-known problems associated with ‘financial repression’. That is prolonged periods of artificially low interest rates. One of the down sides of this approach is that makes it extremely difficult for pensioners to get a reasonable income from their investments.

These are both important subjects for further investigation. But the focus here is on the employment effects of the crisis. Even from this perspective, there are several channels worth considering.

State pensions are likely to be squeezed further as governments find their fiscal position becoming more difficult. Part of the reason for the squeeze will of course be the cost of paying for measures to contained the virus and its economic impact. But the tax base will also narrow as unemployment rises.

Defined benefit (DB) schemes are likely to feel indirect effects from the employment squeeze. That is as opposed to the direct impact of financial repression – which push up their liabilities – and depressed returns on assets.

In the UK, for example, Milligan says the trend from DB to defined contribution (DC) pensions is likely to go even further than it already has done. “With all of these extra pressures it is all the more likely employers go for DC because it is the cheaper option as far as they are concerned”.

Another change related to UK DB pensions is identified by David Blake, professor of pension economics at Cass Business School in London. He says there is a big increase in people over 55 who are taking out their DB pots to spend now. Such a move can of course reduce the immediate financial pressures on such individuals but it means they face a reduced pension in the future.

Whereas DB schemes in the UK are nowadays largely confined to the public sector, in the Netherlands they are more ubiquitous. But here too there are likely to be secondary effects. 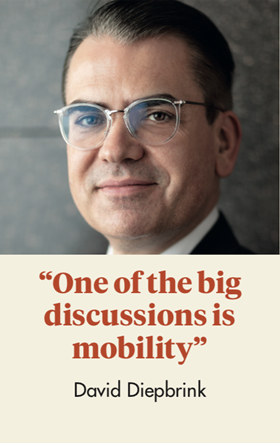 David Diepbrink, wealth leader at Mercer in Netherlands, points to a reassessment of priorities by his corporate clients. “One of the big discussions is mobility,” he says. In the corporate world, this relates to company cars, probably the second most costly employee benefit after pensions.

Diepbrink points out that in the post-COVID world it is likely there will be much more home working than before the pandemic. That means company cars will be a less attractive perk than in the past. From an employee benefits perspective, that could mean maintaining pensions but cutting costs by dispensing with company cars.

Those reliant on DC pensions are likely to be harder hit. The impact, of course, will not be on the schemes themselves, since the risk is borne by the members who have lower pensions.

Members of such schemes are more likely to have periods of unemployment in which they do not make any contributions. These are unlikely to be made back up if and when they return to employment. That means that those affected are likely to have either a more delayed or more impoverished retirement.

The COVID crisis is also likely to accelerate the pre-existing trend towards greater job insecurity. That means a rising share of the self-employed, those on zero-hours contracts and those working in the ‘gig economy’ such as Uber taxi drivers. 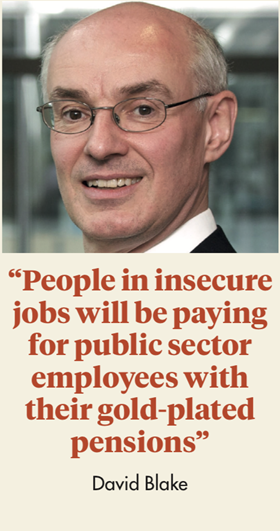 Some of these might have reasonable pension provision – particularly if they are fortunate enough to be wealthy – but many others are likely to fall through the net. This is not a new problem for pension provision but looks set to be exacerbated.

Pensions inequality looks set to widen. While the employment crisis is likely to hit pension provision, for many the effect will be profoundly unequal. The growing proportion of the population that is unemployed or in insecure work looks certain to suffer the most.

Roelof Salomons, professor of investment theory and asset management at Rijksuniversiteit Groningen, says in that respect, the situation in the Netherlands is similar to other European countries. “It especially puts the burden on the young, on people who have flexible jobs, are on zero-hours contracts or are service-oriented.” Under such circumstances, he points out that even his students are finding it difficult to get internships.

Blake even argues that the situation in the UK can be seen as a case of the relatively poor subsidising the relatively well off. That is because DB schemes – largely in the public sector – will in effect be financially backed by governments. But those in more marginalised sections of the labour market will be among those paying taxes to pay for such subsidies. “People in insecure jobs will be paying for public sector employees with their gold-plated pensions,” he says. 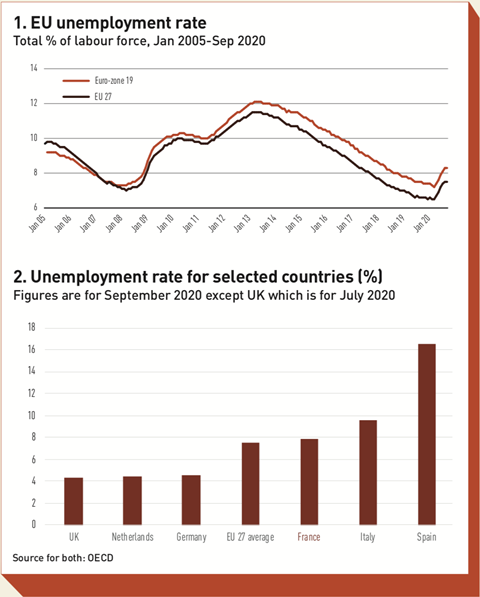 It would be nice to finish the year on a positive note but in relation to pension provision this does not look like realistic. The impact of the COVID-related measures looks like making the pre-existing challenges even more difficult to resolve.

Roelof Salomons puts it succinctly: “We know one thing for sure,” he says. “Pensions will be less certain and certainly less.”