5
2021 Investment horizons: Sovereign debt in the wake of the pandemic
Reports

2021 Investment horizons: Sovereign debt in the wake of the pandemic

Current issuance levels look like an experiment in government debt. What are the warning signals for investors?

Locking down economies and furloughing workers has been an understandable action by governments struggling to cope with a pandemic. The burden has been borne primarily by sovereign debt markets.

The International Monetary Fund (IMF) estimated in the October 2020 edition of its Global Financial Stability Review that the COVID-19 crisis is expected to push global public debt above 100% of GDP in 2020. Headline fiscal deficits in the advanced economies, it expects, will be five times higher in 2020 than in 2019. This will also create elevated vulnerabilities in the corporate and banking sectors as bank holdings of government debt have increased in most countries, tightening sovereign/bank linkages.

Moody’s expects to see annual increases in the debt load in excess of 20% in countries such as the UK, Italy, Japan, the US, Canada and France. A large cluster of other countries are not too far below that, says Sarah Carlson, senior vice-president at the sovereign risk group of the credit rating agency.

Where the most issuance is occurring and where the most concerns should be are two different questions, Carlson says. Emerging markets have seen about half the increased debt issuance of developed markets, amounting to about 10% of GDP. “That is in part a reflection of the fact that these countries’ policy response is constrained in some cases by the amount of fiscal space they have. Some of them also face funding and liquidity pressures,” she says.

But the likes of Brazil, Mexico, Indonesia and China have increased their debt-to-GDP ratios to extremely high levels, says Gerard Fitzpatrick, head of fixed income at Russell Investments.

In contrast, the developed markets of Europe are able to make deliberate attempts to extend the average weighted maturity of their debt to lock in today’s cheap funding. They will, however, also be joined by a significant new player, the EU, says Eric Brard, global head of fixed income at Amundi.

The EU’s initial issuance is aimed at helping to provide protection against the current crisis but the implications are much deeper. “For the first time ever, we have a channel to provide joint issuance at the EU level, so this is the first step of a joint fiscal policy. This can provide a pillar of strength for the EU,” Brard says. It will also lead, he says, to a compression of spreads among lower-rated EU sovereign credits because investors have access to a safer source of funding for European countries backed by the EU.

This next generation of EU funds and other European support packages is going to result in a 20-fold increase in debt issuance from the EU, says Carlson. By 2027, Moody’s expects that to be close to €1trn.

Not surprisingly, COVID-19 is having an impact on ratings outlooks. Moody’s considers there to be four main pillars of sovereign risk. First, is a country’s economic strength encompassing its wealth and its growth prospects.

Second, is the strength of institutions and governance.

Third, is the government’s fiscal strength through metrics such as the ratios of total debt and, separately, total interest payments to GDP and to revenues.

Finally, there is the susceptibility to event risk. The stronger a country’s economy, the stronger its institutions and governance, the more debt that it can carry without increasing probability of default or expected losses. 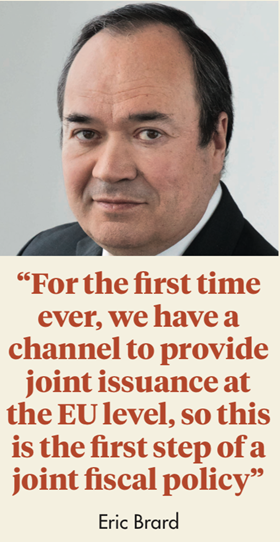 Clearly, emerging markets as a whole are facing challenges but there are also some highly rated countries within the universe. The countries with most rating concerns are those with  liquidity and funding problems. There is a need for some countries to find new sources of revenue generation, as they try to rebuild fiscal space, once some semblance of normality has returned, says Carlson. Moody’s makes the distinction between transitory impacts of the pandemic and deeper economic scarring that gives rise to more of a structural impact on growth.

That, of course, also applies to developed countries. Moody’s downgraded the UK in 2020 because it expects the economy to grow more slowly in the future. The impact of both Brexit and COVID-19 on revenues have contributed to the hit. In addition, the predictability and effectiveness of UK institutions are viewed as being weaker than they were, particularly with regard to fiscal institutions.

Shamik Dhar, chief economist at BNY Mellon Investment Management, does not expect the huge increase in debt to lead to a rise in government bond yields. He argues that there is an even bigger demand for safe assets, especially in dangerous times such as these. “What governments around the world have found is that they’re able to issue debt at pretty much lower yields than before the crisis,” he says.

This is not just because the banks are buying but there is also a huge demand from pension funds in the West driven by regulation, and from China and the rest of Asia. The UK, points out Dhar, came out of the second world war with a debt-to-GDP ratio of about 250%. “If you think about governments as essentially having an infinite time horizon, then having a year’s worth of income in debts as a result of a short-term crisis isn’t necessarily a terrible thing, especially when there’s a huge demand for that debt out there,” he says.

Even if a COVID-19 vaccine takes a while to help quell the pandemic, Dhar says the debt-to-GDP ratio will not rise as quickly as it did this year. “The UK could cope with 120% debt-to-GDP and it is increasing at around 20% a year, so it has another year at least to reach there.”

How much debt a country can bear without suffering adverse consequences is a controversial subject. US economists Carmen Reinhart and Kenneth Rogoff published an influential paper in 2010 (‘Growth in a time of debt’) arguing that debt/GDP levels of above 90% cuts GDP growth roughly in half. But the controversial modern monetary theory (MMT) approach that is gaining increasing prominence, argues that governments should print as much money as they require through debt.

What matters is controlling inflation by ensuring that spending is curtailed as full employment is reached. With large economies now significantly above the Reinhart-Rogoff 90% mark, there is, as Fitzpatrick at Russell Investments says, more material headwind towards growth. But, he adds, the counter-argument points to the impact of the debt-induced stimulus in a time of crisis.

The current situation could be seen as an experiment on the limits of government debt. If that is the case, it is necessary to assess what warnings signs investors should consider. “I am of the belief that an increase in debt, per se, isn’t necessarily a big problem, so long as interest rates, bond yields and inflation remain relatively low,” says Fitzpatrick. The key watch point is going to be what happens with inflation.

Joe Biden’s victory in the US presidential elections could be stimulative in the short term. However, it is likely to lead towards extra inflationary pressures on the back of relatively low inflation.

If that turns out to be the case, coupled with the Federal Reserve staying lower for longer, there is a risk of inflation potentially getting more out of control. This could happen when economic improvements become apparent and there is a return towards full employment with wage inflation increasing. “There is potential for it to happen, but in these dark times with COVID it certainly doesn’t feel like we’re going back to full employment or retailers out there are increasing their prices,” says Fitzpatrick.