Germany & Austria: Do social partners pensions have a future?

2
Austria: Time to step up
Reports

Austria: Time to step up

Austria’s new government coalition, an unprecedented formation of the conservative People’s Party (ÖVP) and the Greens, has the task of working towards delivering a reform of the occupational pension system.

Austrians seem to be in favour of a change. The vast majority (71%) view state support for occupational pension funds positively, while 77% see tax privileges on investments for private-pension provisions as important, according to a survey by Peter Hajek on behalf of Aktienforum, an association representing Vienna as a financial centre.

“In the short term, it is important to define the framework for the occupational pension, and the government has included important points in its programme,” says Andreas Zakostelsky, chairman of the Association of Austrian Occupational Pensionfunds and general director of the VBV-Group.

The government wants to introduce a general contract for pension funds (General-Pensionskassenvertrag) to give the option to transfer money saved in Vorsorge-kassen (severance pay funds) to Pensionkasse.

Zakostelsky says: “I think the general contract will be approved and will enter into force in 2021. It does not represent a cost for the state; it does cost companies and each person has the option to either enter the system or take the money. I don’t think there will be any argument against this point.” 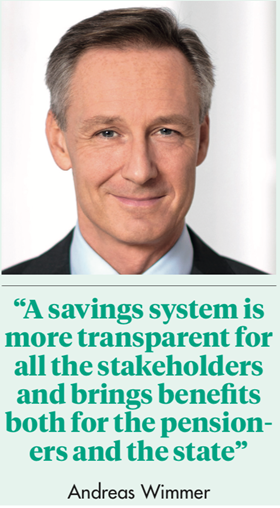 A second important point relates to tax deductions for employee contributions, meaning that pension payments come from the gross income rather than net.

Zakostelsky says this second issue, the premium model, will more than likely be handled in the context of a more comprehensive fiscal reform, although he cannot predict the chances of success.

“I think that there is the perception that something broadly has to be done to bring the system together. I think that this second point could be approved in this legislative period. The measures are necessary.”

Zakostelsky continues: “The government also has a clear commitment to reinforce the capital market, and it is a very important signal that the Greens support it. It makes credible that the measure can be implemented. We are ready to give our support to define the framework. The government has received the message that we are ready to do our part on this.”

For Andreas Wimmer, senior group managing director at the CQ Investment Group, the reform of the pension system is “urgent and necessary. “A savings system is more transparent for all the stakeholders and brings benefits both for the pensioners and the state compared to a pay-as-you-go contribution system,” he says. 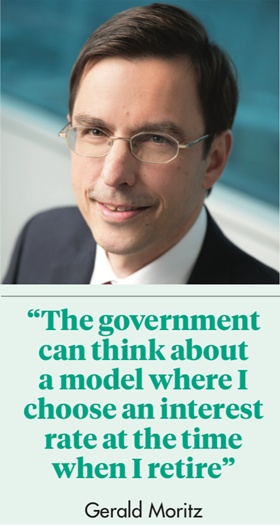 Wimmer says PAYG systems depend on national demographic developments while a savings system is much more calculable both for the state and beneficiaries.

“Knowing at all times how much pension you will receive, regardless of demographic trends, creates a great deal of confidence among contributors,” he says.

However, Wimmer insists that passing the reform is ultimately a political decision. “The political debate over the issue could be intense, and this is why a series of governments have decided not to do anything about it,” he says.

Michaela Plank, principal and member of the country leadership team at Mercer Austria, argues that potential changes will certainly be a matter of discussion, but “we should not expect a big reform”.

The central question remains precisely which points of the programme the government will implement. “There is no point in the programme on tax relief unfortunately, but this is one of our requests. The introduction of a premium model for people with low income is another point.”

Gerald Moritz, managing director of Moritz Consulting, raises the question of fixed-interest rates. “The government can think about a model where I choose an interest rate at the time when I retire.

There is a good chance that a reform of the pension system will happen, Moritz believes. “I think the government will implement measures such as tax deduction of employees’ contributions, for example, even though discussions have been ongoing for a long time on how the private retirement provisions can be better shaped fiscally.

“It’s a good idea, because it seems that we will see little interest rate in the next years and it makes sense to leverage this instrument with pension funds that historically have performed well,” Moritz says.

For Carl Hollitscher, head of institutional sales for Switzerland at Franklin Templeton, the focus on workplace pensions is crucial given the demographic structure of Austria’s population.

“Good performance of Austrian pension institutions in 2019 helps, but due to the relatively low assets per head, it doesn’t have a large enough impact to make a real difference” - Carl Hollitscher

He says: “Good performance of Austrian pension institutions in 2019 helps, but due to the relatively low assets per head, it doesn’t have a large enough impact to make a real difference. More effort will be needed to build out the sector.”

Pension funds performed well in 2019 (see Austrian pension funds post positive 2019 performance). After a positive start to the year, however, they will face a period of uncertainty in 2020 associated with the COVID-19, the unresolved questions of Brexit and the US-China trade dispute, and upcoming elections in the US.

Moritz sees uncertainty ahead and points to the severe market correction. “Uncertainty is very strong and I think that we have to wait and see what is going to happen further. This is a challenge for every asset manager. Markets are heavily under pressure. It is possible that a very fast rebound might happen if the crisis stops, but is also possible that the crisis will go on for a longer period of time and more industries will be affected,” he says.

Plank says: “We don’t believe bond performance will be positive in the short and medium term. We believe that the stock market will not maintain the high level; we will have the elections in the US too and the problem of Brexit is still on the table. Pension funds will have a moderate approach.”

Austrian pension funds post positive performance in 2019
After a negative return in 2018, pensions funds in Austria performed well in 2019, returning 11.8%.

Occupational pension funds in particular recorded a remarkable return of 5.7%, according to consulting firm Mercer Austria. However, the performance of individual pension funds ranged widely from 9.87% to 3.87%.

The APK Vorsorgekasse (a severance pay fund) is at the top of the ranking, according to Mercer, with 9.87%, the VBV Vorsorgekasse follows with 6.81% and the BUAK finished in third place with 5.38 %.

One of the main drivers of the positive development last year was the equity market.

“Stocks were an important driver,” said Andreas Zakostelsky, chairman of the Association of Austrian Occupational Pensionfunds and general director of the VBV-Group.

He points to equity allocations of 35-40% in recent years and to average annual returns of 4.41%, over the last 10 years.

Positive developments in equity markets have also been an important factor, alongside “sufficient diversification in the asset allocation and also the expansion of the portfolio in the direction of “private markets”, says Michaela Plank, principal and member of the country leadership team at Mercer Austria. 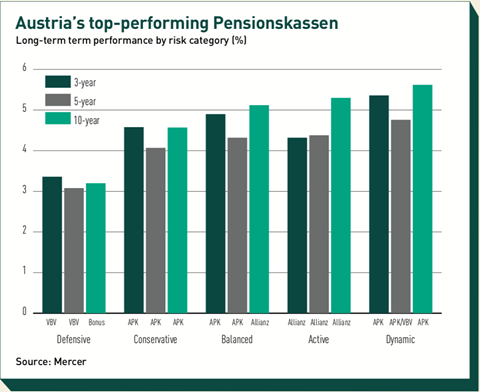 BONUS topped the list in the ‘defensive’ category with 8.08%. “Last year, on one side equities have developed well and on the other side through the interest-rate reduction in the bond sector pension funds have had good returns,” says Gerald Moritz, managing director of Moritz Consulting.

“If interest rates go down, the value of the bonds in the portfolio of the pension funds increases and this has contributed to positive results. Both in stocks and bonds there have been good developments. There was also a rebound effect from 2018,” he adds.

Mercer notes that the medium to long-term returns equal the market’s actuarial interest rate or Rechnungs-zins (see figure). “It is therefore important for the system to set the rate in line with the market,” says Plank.

“It should be possible for every single pension candidate to set their actuarial interest rate at the beginning of the pension period and thus decide for themselves how their pension will develop.”

Germany & Austria: Do social partners pensions have a future?