There are few challenges as daunting as planning for, and through, retirement, which can last for six decades or more.

Much has been written about the riddle of how to prepare financially for a comfortable retirement. A recent CFA paper* attempts to take the discussion in a new direction.

The paper bridges financial modelling with elements of behavioural finance to build a more holistic picture of how people behave. Leading on from that it helps them best plan for their retirement.

The question has taken on a new urgency with lengthening lifespans and the demise of defined-benefit pension schemes. In short, retirement is more uncertain than ever – we are living longer with, in many cases, less income to see us through our final years.

According to Vanguard, at the end of 2016 the median balance of participants aged 65 and over in the its plans was $60,724 (around €55,000). This translates into a life annuity with an annual payout of about $4,000. Vanguard also reports that members’ median contribution is 5% of income, although it increases to 10% when including the employer match. However, even a combined contribution of 10% is likely to be insufficient unless contributions start very early and financial markets deliver attractive returns.

It should be clear from this example alone that most investors significantly underestimate the savings effort required to maintain the standard of living to which they are accustomed.

Furthermore, although what is required to achieve a specific target of income at retirement when all parameters are known could easily be modelled, reality is more complex. For example, even if we have some control over when to start saving, our ability to save substantially for retirement is influenced by a variety of considerations, such as the purchase of a home, the cost of raising children, and unexpected career or health developments.

In addition, longevity is an unknown quantity, yet retirement plans are often based on a specific forecast of longevity. Even though the median life expectancy for a 65-year-old in the US is 83.3 years for men and 85.9 years for women, a significant percentage of people will live past 90. Furthermore, as someone ages, the older he is expected to live.

A dynamic issue, life expectancy becomes even more complicated in the context of a couple because at least one of the two individuals could live a very long time. This possibility should also influence the allocation policy over time and the potential need for longevity insurance.

Another consideration is also importance. Research shows that our ability to benefit from learned skills and knowledge declines in our 60s, while our ability to solve new problems starts declining in our 20s. In other words, the sooner we start the better, and not just because of the power of compounding interest.

We are not purely rational actors
Given that financial planning for retirement is a multi-decade endeavour, investors face an additional challenge.

As well as managing short-term uncertainty, investors and their financial planners must be concerned with how to address longer-term contingencies. For example, there is significant uncertainty about long-term expected returns, real as well as nominal. Calibrating a retirement effort in the context of unpredictable returns is a significant challenge, even for experts.

Faced with such complexity, the temptation can sometimes be to simplify. Most conventional retirement programmes effectively model away life’s complexities – for example, by assuming we will work for 40 years and then retire, be able to secure a return of 7% a year, and never withdraw any money.

If these conditions held, retirement finance would be easy. However, it is not because any number of variables can befall people, which are not possible to model, for example:

• Getting sick and becoming unemployed;
• Inheriting money, getting pay rises and promotions, changing careers;
• Assuming care responsibilities with highly variable expenses and effort;
• The fact that it is not always possible to invest 7% a year;
• The idea that withdrawing money in a fluctuating market is more costly than withdrawing it in a stable one.

Given these variables, successful retirement planning needs to incorporate both quantitative and behavioural aspects to enable more accurate modelling of real-life scenarios.

“By excluding the behavioural finance side of the equation, many traditional retirement planning models presume that people are purely rational actors”

By excluding the behavioural finance side of the equation, many traditional retirement planning models presume that people are purely rational actors who will always seek to maximise gain, subject to a concern about risk. However, behavioural economists – and a quick review of one’s own life, perhaps – demonstrate that human beings are often far from rational in their decision making. 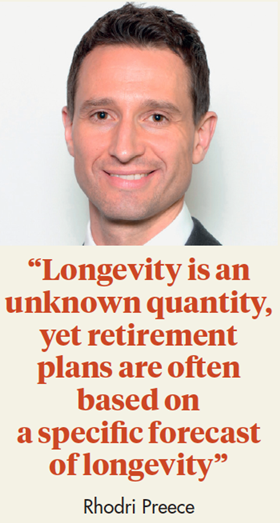 Lussier’s ‘engineer’s approach’ to retirement modelling, which uses Monte Carlo simulation, helps to model in some of this complexity that conventional planning excludes. The Monte Carlo simulation has been invaluable in understanding complex situations across many fields because it explicitly considers all the potential outcomes of an action – that is the entire probability distribution, not just its statistical expectation.

The Monte Carlo simulation allows us to study the interactions between variables such as the risk of losing our job and experiencing a negative market return simultaneously. It also helps us to see how processes evolve over time, for example, by placing the negative market return at the beginning, in the middle, or near the end of a career or life. These dynamics make a big difference in determining our ultimate prosperity.

Although the combined approach of quantitative modelling plus a dash of behavioural finance begins to approximate the infinite richness of human life, it is not possible to ‘model’ life. People, unlike models, need to be adaptable and creative in their response to changing circumstances, both their own and that of the markets.

Retirement planning is not solely about work income, savings rate, asset allocation and returns, longevity risk, and the uncertainty inherent in all these variables. Nuances abound, such as whether a household should plan jointly or separately, incorporating the complex effect of taxes and optimising the tax location, determining if annuities are appropriate and to what extent, whether to consider a reverse mortgage, which income replacement ratio is appropriate and how it could evolve as we age.

No one is going to exactly hit their retirement goal. We might come in above or below, and our lifestyle needs to be flexible enough to accommodate the complexity of life so that, in the words of that least messy, half-human character, Star Trek’s Mr Spock, we may live long and prosper.