In a situation as destructive as a global pandemic is it is difficult to find many winners. Hundreds of thousands of lives have been lost and economies have been brought to the brink – and we may still only be at the start of the saga.

In a situation as destructive as a global pandemic is it is difficult to find many winners. Hundreds of thousands of lives have been lost and economies have been brought to the brink – and we may still only be at the start of the saga.

But in financial markets, at least, there is one good news story: bond ETFs.

Once the overlooked younger cousin of dominant equity exchange-traded funds, these fixed income instruments are looking increasingly confident on the world stage.

Not only have they gained in popularity with investors of all sizes and shapes, they have come to the aid of governments in a time of crisis. Most importantly, however, the test the sector so desperately needed to show how the instrument could work under pressure arrived in 2020 – and at speed.

Testing times
As the realisation dawned that Covid-19 was spreading rapidly outside of Asia, causing many of the world’s largest economies to close, financial markets went into panic.

Liquidity vanished as investors attempted to offload risk assets to a limited number of buyers, according to Antoine Lesné, head of SPDR ETF strategy and research at SSGA – but matters rapidly advanced. 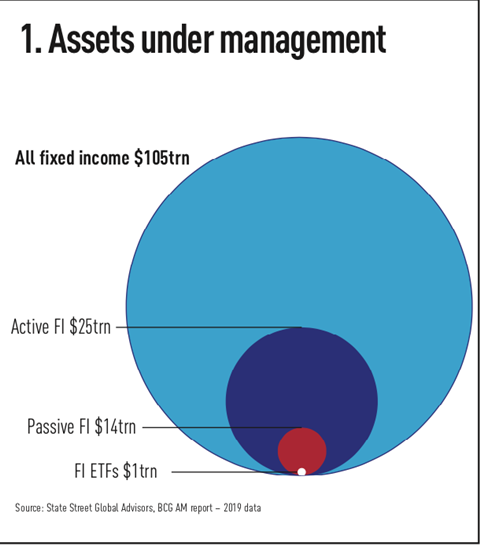 “Even ‘safe assets’ such as government bonds and gold were sold as these were some of the few assets that continued to trade,” says Lesné. “Eventually, even these markets started to become dysfunctional.”

Dysfunctional markets may be useful to nimble active traders, but for most this evaporation of liquidity was a calamity.

“It was difficult to get prices for bonds,” says Jose Garcia Zarate, associate director of passive strategies research for Morningstar Europe. “And very difficult to transact.”

#winning
But while stressful for market participants, this scenario would turn out to be the chance bond ETFs needed to prove their mettle. Critics of the bond ETF model have queried its ability to price and trade under pressure, with others even claiming the wrapper exacerbated poor liquidity.

“It was a test everyone expected them to fail,” says Zarate. “And they passed it with flying colours.”

Howie Li, head of ETFs at Legal & General Investment Management (LGIM), says the market had been waiting for just such a stressed environment to show that the ETF would do exactly what it was designed to do.

And, remarkably to some, it did. Despite huge redemptions from investors all around the world and massive volumes being traded each day, there was no issue in the secondary markets, according to Zarate.

In fact, authorised practitioners, who trade bonds on an ETF’s behalf, were able to add liquidity to secondary markets by netting off transactions between providers, he says.

For Lesné, the 2020 Covid-19 test provided “proof of concept for fixed income ETF sceptics”, as they demonstrated their resilience and often served as price discovery tools for the underlying basket – and handily, an important overseer was watching. 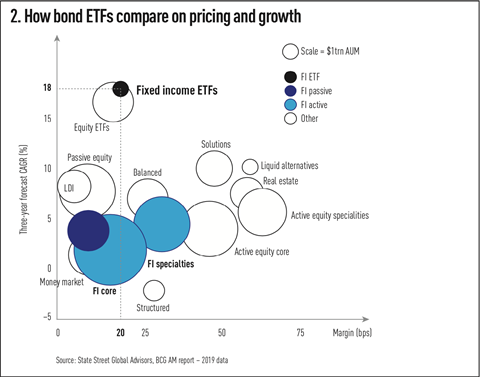 Essentially, the world’s financial regulator told markets that ETFs are better at price discovery than mutual fund traders, something LGIM’s Li has been at pains to stress for some time.

“When you get NAV net asset value data, which is struck once a day in any portfolio, that figure is actually always a historical figure,” he says. “It’s valued, not necessarily based on you knowing what the market’s willing to pay for, it’s just the general evaluation of what is being held in a portfolio.”

With an ETF, because you can have a premium or discount, it gives a real-time view for any investor.

“ETF prices also corrected lower but there is no evidence of the ‘doom loop’ of ETF selling, driving underlying assets lower, precipitating more ETF selling that some in the market had indicated was a risk,” says Lesné. “There were some significant dislocations between ETFs and their NAVs that resulted in larger than usual premiums/discounts, but this suggests that the arbitrage band in which ETFs usually trade had widened and shifted to incorporate new information relating to the underlying bonds.”

For Zarate, the real time trading nature of the fixed income ETF was valuable to all market participants, allowing authorised participants to gauge supply and demand more accurately.

If it works for Jerome…
If the BIS report, published less than a month after the collapse in liquidity was not enough for the doubters, a move from the US financial regulator may have helped convince them.

While not unprecedented – the Japanese Central Bank has bought both bond and equity ETFs as part of its quantitative easing programmes – it was a move that may have surprised some.

However, for Li, buying bond ETFs is an efficient market stimulus model.

“If you buy portfolios of bond ETFs, it has the same effect as buying the bonds directly, without having to face the liquidity kind of issues or spreads of every single individual bond,” he says. “It’s almost like a single trade diversification.”

Essentially, this quickfire purchase enables the boost to be directed where it is needed, fast.

“We are seeing a continued flow into these smart beta and active fixed income strategies because it’s providing investors with that additional tool to reap the benefits of the ETF, but in a way that fixes some of the flaws that you see in bond ETFs that only offer market cap weighting” - Lidia Treiber, WisdomTree

Additionally, by snapping up ETFs rather than taking on individual bonds, central banks, which are usually long-term holders of debt under QE programmes, do not unwittingly withdraw valuable liquidity from markets, says Zarate.

A whole new world
This single trade diversification is going to be one of the main drivers of bond ETF popularity, but if fixed income is going to catch up to equities more innovation is needed. Luckily, there is no shortage of that.

“[Pricing under pressure] was a test everyone expected [bond ETFs] to fail. And they passed it with flying colours” - Jose Garcia Zarate, Morningstar Europe

“Market cap weighted indices is really where it started, but we’re seeing growth in smart beta and active ETFs as well,” says Lidia Treiber, director of research at WisdomTree.

At the end of June, Morningstar showed these strategies to make up around 5% of the overall universe – but we know nothing stands still in ETFs.

“We are seeing a continued flow into these smart beta and active fixed income strategies because it’s providing investors with that additional tool to reap the benefits of the ETF, but in a way that fixes some of the flaws that you see in bond ETFs that only offer market cap weighting,” Treiber says.

It also offers a way into to more esoteric asset classes – such as contingent convertibles and other non-traditional options – for investors who might struggle to access them in a mutual fund.

Focus on the future
After fine performance in the toughest markets seen in a decade, is the bond ETF’s route to popularity secured? Maybe.

In June, fixed income ETFs/ETPs gathered global net inflows of $38.97bn, according to ETFGI, more than double the $16.9bn flowing to equity products. In fact, just three of the ETFs that won the most assets were equity instruments.

In Europe, bond ETFs posted the sector’s highest net inflows (€16.4bn) in the first half of 2020, according to Refinitiv. It might be little surprise, therefore, that they now make up 30% of all €830bn in total ETF assets under management – up from 27% a year ago.

And that number can go higher, according to Lesné.

“While the universe only accounts for around 1% of the estimated $105trn global bond universe, BCG published a report in 2019 forecasting a three-year compound annual growth rate of 18% a year,” he says. “At such a pace, the $2trn bar will be reached before the middle of the decade.”