It is often argued that COVID-19 has ushered in a ‘new normal’. In this view, the pandemic has created the conditions for the world to operate under a fundamentally different set of rules than existed beforehand.

In relation to the global economy, this is often taken to mean that the trend to globalisation is going into reverse. The world is becoming less internationalised, the argument goes, so ties between the West and China will consequently become weaker. Western firms are therefore likely to reshore a significant part of their activity to their home markets.

Doug Irwin, a fellow at the Peterson Institute for International Economics in Washington DC, a non-partisan think tank, put the case articulately in a blog post in April 2020: “The COVID-19 pandemic is driving the world economy to retreat from global economic integration. Policymakers and business leaders are now questioning whether global supply chains have been stretched too far. In an environment where alliances are uncertain and international cooperation is absent, they are also asking whether they should reduce their economic interdependence. National security and public health concerns are providing new rationales for protectionism, especially for medical gear and food, and an emphasis on domestic sourcing.”

But for those readers who have been following such questions for some time, or have looked beyond the recent discussion, these claims will probably have a familiar ring. That is because similar arguments were made back in 2011 in response to events that year. The devastating earthquake and tsunami in Japan, as well as extensive flooding in Thailand, disrupted global supply chains. As Foreign Policy, a respected US journal, said at the time:

“There will be waxing and waning, zigging and zagging, tracking backwards and forwards, but I think the direction of travel is pretty clear”

“The Japanese tsunami and the Thai flooding have not only caused enormous human tragedies, but have also underlined the fragility of the global supply chain and the risks attached to it. In the wake of the events in Japan, auto and electronics production was substantially reduced not only in Japan but also in the U.S. and Europe as well because critical parts that were made only or mostly in Japan could not be obtained.”

So almost a decade ago, there was already a discussion of deglobalisation and reshoring but, as will be shown, relatively little has happened since then. That is not to say the two sets of events are directly comparable. The COVID-19 pandemic has clearly had a direct global impact, whereas the earlier events were relatively localised. There were also growing tensions between the West and China even before the pandemic. But hindsight suggests that it is best to be cautious about proclaiming far-reaching changes to the global economy. 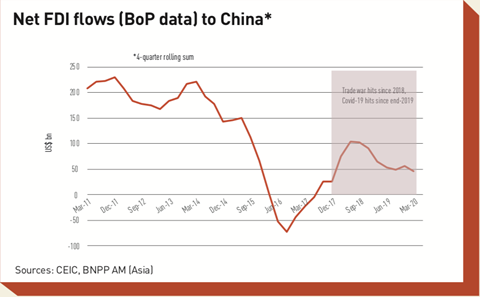 Indeed, even Irwin is more guarded than a cursory reading of his argument suggests. The headline to an initial shortened version of his piece read: “Globalization is in retreat for the first time since the Second World War”. In contrast, a fuller version of the article makes clear that Irwin’s view is that the pandemic is adding momentum to what he sees as an existing deglobalisation trend. However, there is at least room for debate about whether the second contention is true.

One development that is hard to dispute is that companies are putting more emphasis on resilience than they did before the pandemic. Prior to the outbreak of COVID-19, the emphasis for larger companies was on making production as efficient as possible. Developing global supply chains was an important part of this process. However, the emphasis has shifted, at least to some extent, towards making companies better able to withstand unexpected shocks.

Andrew Milligan, an independent consultant, argues that a consequence of this renewed focus on resilience is that overseas firms will invest less in China in the years to come. “There will be waxing and waning, zigging and zagging, tracking backwards and forwards, but I think the direction of travel is pretty clear,” he says.

Milligan may well be right about future prospects, only time will tell, but it is possible to be more certain about the past. Net foreign direct investment (FDI) flows into China remain positive despite the trade war since 2018 and the advent of the COVID-19 pandemic (see figure).

Of course that does not mean that no companies are reshoring. Look, for example, at the website of the Reshoring Institute, an organisation that aims to encourage manufacturing back to the US. It is possible to find examples of several US-owned companies reshoring from Asia. However, on balance the trend still seems to be in the opposite direction

Chi Lo, the senior economist for Greater China at BNIP Paribas Investment Partners, acknowledges examples of reshoring but argues they are too sparse to be identified as a trend. He does not rule out such a development in the future but argues it is yet to unfold. “I do not see any evidence of decoupling or leaving China becoming a trend yet,” he says.

Lo points out that Japan, South Korea and Taiwan have been trying to reshore some of their production from mainland China for several years. However, he says the shifts are relatively small.

He points to two reasons why reshoring from China is so difficult. First, much of the FDI in China is aimed at expanding a presence in its huge domestic market. This is not something western firms or, indeed, other Asian firms want to lose out on.

Of course, the recent shifts in the global economy could make China even more important to western companies. For example, according to the IMF’s World Economic Outlook from June, China’s GDP looks set to grow by 1% this year. That is modest by its own historical standards but, in contrast, US economic output is expected to contract by 8% and euro-zone GDP is forecast to fall by more than 10%. In other words, the domestic Chinese economy will become even more important relative to that of the developed economies.

Another reason why reshoring from China is likely to prove difficult is that regional and global supply chains are highly integrated. It is one thing to proclaim the importance of reshoring but withdrawing from established arrangements, often created at considerable cost, is likely to be enormously expensive.

Indeed, Lo argues that in some respects western firms are becoming even more integrated with China. The liberalisation of China’s financial markets, including the relaxation on the rules on foreign holdings, have helped bolster the export of foreign capital into China. Arrangements such as Stock Connect – linking Chinese mainland markets with the Hong Kong stock exchange – have also played an important role in that respect. 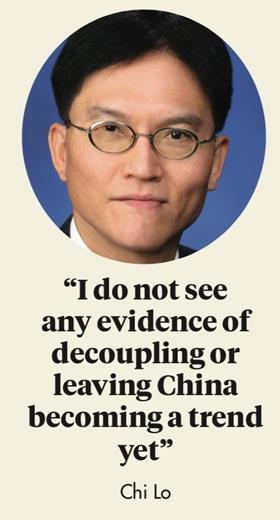 Of course, it is always possible that politicians will attempt to impose a reshoring agenda on business. In certain areas this looks inevitable. For instance, President Emmanuel Macron of France has announced plans to return the manufacture of key medicines to Europe. Similar initiatives look likely in relation to medical equipment.

However, if politicians widened the remit of their plans to bring other forms of production back home it would probably prove extremely costly.

It is not possible to say for certain in which direction all these trends will end up going but the stakes are without doubt incredibly high. If western firms do decide to distance themselves from China it is likely to have a profound effect on global supply chains and the world economy. If politicians push companies in this direction the costs would be high in both economic and political terms.

Whatever happens, there is likely to be a shifting emphasis among corporations from efficiency to resilience. Of course, this is not an absolute question of one or the other. However, even a change in the relative balance between these two factors could have profound implications for the global economy and the corporate world.