Innovate or die may be a cliched business school mantra but, given the past 10 years, the saying has never been more relevant. The corporate landscape, particularly among US larger companies, is filled with companies such as Eastman Kodak Company, Toys R Us and bookstore retailer Borders, which assumed they had the luxury of time to catch up. Instead, they became case studies that highlight the dangers of ignoring progress and technology.

“Although technological disruption is not new, the difference this time is the pace and adoption of change is so fast, that it is having a significant impact on every industry,” says Luke Barrs, EMEA head of fundamental equity client portfolio management at Goldman Sachs Asset Management and one of the authors of the firm’s 2020 Vision report. “Material disruption will clearly create winners and losers but those companies on the right side of innovation and growth will generate better top and bottom-line growth which, in turn, will equal a better share price.”

Barrs points out that one third of US listed companies are estimated to be highly vulnerable to technological disruption and have no clear path to growth. Some sectors will be more challenged than others, such as traditional retailers without e-commerce platforms or auto companies lacking well-defined electric vehicle strategies.

Fund managers have also mentioned financial service combatting challenger banks and fintech firms, as well as media firms up against streaming services and other social media outlets. Meanwhile, healthcare companies are also on many lists because of their failure to overcome the data hurdles hampering customer services and operating efficiencies.

While the behemoth groups in each sector will have their own specific set of obstacles, one of the challenges, according to Robin Brown, managing director of the Arkansas-based independent investment bank Stephens, is that, unlike the new tech entrants, many established business have been hampered by the historical ‘millstones’ of research and development constraints and return on equity targets. “In order to effect transition, companies need to deliver on their strategies whilst articulating that a short-term dip in profits can still deliver long-term benefits,” he says.

However, it is not just about investing in shiny new digital tools but also developing new business models that deploy the technology to their best advantage. Taimur

Hyat, chief operating officer at PGIM, the $1.3trn (€1.2trn) global investment management business of Prudential Financial and co-author of the Technology Frontier, says these new structures will be key in separating weak from strong companies in the US.

To combat tech disruption, he points to the rise of the so-called superstar companies which have learned to leverage technology, proprietary data and global networks to dominate markets. He notes that they are reshaping corporate America and effectively creating ‘kill zones’ around their area of dominance, buying out their rivals as well as start-ups to shut down challenger products or assimilate new capabilities. In 1975, half of the earnings of US public corporations was generated by 109 firms. Today, the same percentage comes from just 30 companies.

New business models
One example is Disney which has been cementing its position by gobbling up Pixar, Marvel, Lucasfilm and the much harder-to-digest 21st Century Fox acquired two years ago for $71.3bn. In addition, it recently launched its own streaming service,  Disney+, to take on rival Netflix with new as well as existing content. “Disney was smart enough to realise where the industry was moving and that people were no longer watching linear TV,” says Dan Coleman, who is a portfolio manager on Principal Global Investor’s Equity Income fund. “They are launching their service in different markets as fast as they can and are taking content back from Netflix so the only way viewers can see it is on Disney+.”

Established stalwarts in the financial service sector are also being forced to adjust to the new world. Take JP Morgan, the largest bank in the US, which can afford to be in the superstar category. It recognised that while the nature of its business did not change, customers wanted to engage with its products and services in a different way. To this end, the firm created a digital transformation strategy comprising a tech hub for its retail bank Chase, coding training for staff, partnerships with different fintechs and significant annual investments in technology.

Goldman Sachs also reorganised its business and launched a digital retail banking unit that includes the online bank Marcus, which offers high interest savings and personal loans to mainstream consumers as well as its first credit card with Apple.

By contrast, household retail names are having a harder time keeping pace with the rapidly changing consumer expectations and tastes. Research from CB Insights, a market intelligence firm, showed that there were 22 major retail bankruptcies last year in the US compared with 17 in 2018. To be successful, retailers should have an online presence but they also need to have the most efficient supply chains and the fastest delivery mechanisms, according to Rebecca Chesworth, a senior equity strategist at State Street Global Advisers,

“They also need to make better use of artificial intelligence as well as social media to better target advertising,” she says. “Although physical stores have a handicap, there is no reason why they cannot compete if they have the right features. If you look at Target, Home Depot and Walmart, they have embodied technology and online shopping but people still want to come into their stores to buy things.”

“Although technological disruption is not new, the difference this time is the pace and adoption of change is so fast, that it is having a significant impact on every industry” - Luke Barrs

Walmart, in particular, has become the poster child for retail digital transformation in its efforts to improve customer experience and limit the damage from the omnipresent Amazon. It has not only partnered with Microsoft for cloud computing and Google for voice-activated shopping but also made several acquisitions to enhance both its ecommerce platform and in-store automation.

The US auto industry has also struggled and has been late to the electronic car party, with Tesla seemingly stealing a march. However, Detroit’s big three are finally revving up their engines but their main area of focus will be sports utility vehicles and trucks which are more fashionable for the American consumer than cars. The latest S&P Intelligence report shows that sales of passenger cars in the country dropped 10.9%, last year while they rose 2.8% for trucks, minivans and SUVs. 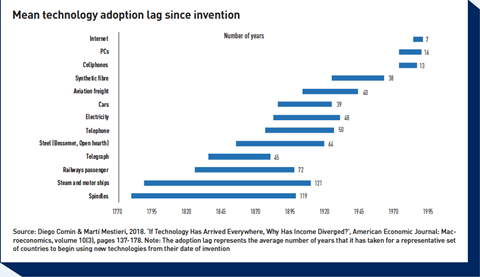 This year should see GM’s Cadillac luxury brand launch a series of electric SUVs, while Ford’s Mustang Mach-E electric SUV will make its debut later. They both, as well as Chrysler, also have electric truck pickups in the works to take on Elon Musk’s futuristic Cybertruck.

Healthcare has also been forced to raise its game. “The industry is full of inefficiency and waste, and it is a perfect target for the disrupters,” says Mikhail Zverev, head of global equities at Aviva Investors. He points to United Healthcare as a good example of an insurer that is investing in technology to create an integrated system. “It is leveraging data and sophisticated analytics, for example, to better understand the impact of certain medical treatments over time as well as to help predict patient behaviours and improve services,” he says.

Although each large-cap is forging its own path, in general, Daniel Flax, senior vice-president at Neuberger Berman says “for companies to be successful they will have to cannibalise parts of their existing businesses, embrace change and accept that a high percentage of their projects may fail. However, if they can learn quickly and make the changes and invest in new models then they will be able to create a lot of value.”