The huge gap in current equity valuations, depending on which metrics are used, presents a tricky challenge for investors

Are equities expensive or cheap at present? The correct answer in these unusual times is both. Depending on which metric is used it is possible to draw diametrically opposite conclusions about market valuation (see figure 1).

The huge discrepancy poses a serious quandary for investors. It gets to the nub of the immensely practical question of whether equities currently present good value to investors or not.

Naturally, those who are prepared to take opportunist short cuts can come up with quick answers but they are far from satisfying. Asset managers who want to present the market as alluringly attractive can point to the Fed model. In contrast, those with a bearish disposition can simply opt for Tobin’s q to show that a market crash is nigh.

A pragmatist workaround might be to assume that the truth lies somewhere in the middle but that is not satisfactory either. It cannot simply be assumed that the correct valuation of equities lies in the midst of the range indicated by different metrics. It may do but then again it might not.

Perhaps the most intractable problem is how to handle earnings – the denominator in the multiple forms of the price-earnings (PE) ratio (see definitions). It is a conceptually simple but devilishly difficult to measure in practice. For example, should valuation models use past earnings or future earnings? And what is the appropriate time period to use?

In contrast, the prolonged period of quantitative easing (QE) is probably playing a central role in the huge gulf between valuation metrics. Arguably, QE has bolstered price levels for both equities and bonds so, relative to each other, they have not necessarily changed significantly. That means that relative valuation models, those such as the Fed model and the equity risk premium (ERP) that measure equities relative to bonds, may not have changed much. In contrast, measures that attempt to gauge the intrinsic value of equities tend to show the market valuations as inflated.

Intrinsic value
One of the most common approaches to equity valuation does not rely on any of the standard metrics, although it can be used in parallel with them. Instead, it attempts to work out the intrinsic value of a company. The calculated figure can then be compared with the current share price to gauge whether it is overvalued or undervalued.

The underlying assumption behind this approach is that equities are best seen as a claim on a flow of future earnings. Finding the intrinsic value therefore means calculating the net present value of its future income stream. According to Janette Rutterford, an emeritus professor at the UK’s Open University, this approach first emerged as far back as the mid-nineteenth century.

Pascal Costantini, the head of research at ValuAnalysis, an independent investment boutique, presents this approach as close to an absolute truth: “As long as capitalism is alive the value of an operating asset is NPV or free cash flow. Period. No one denies that.”

The main equity valuation metrics ranked from most overvalued to most undervalued for the S&P 500:

• Tobin’s q: The ratio between the stock market valuation of companies and their net worth measured at replacement cost. Devised by Nobel prize winning economist James Tobin in the 1970s. He died in 2002.
• Price-earnings ratio (P/E ratio): The ratio of the stock price to the earnings per share. It can be calculated in several different ways including using reported or forecast earnings. The CAPE (cyclically-adjusted price earnings) or Shiller P/E, popularised by Nobel laureate Robert Shiller, is based on average inflation-adjusted earnings from the previous 10 years. The earnings yield is simply the inverse of the price-earnings ratio.
• Stockmarket to GDP (Buffett indicator): The ratio of a country’s total stockmarket capitalisation to its GDP.
• Equity risk premium (ERP): The difference between the expected returns on equities and on bonds.
• Fed model: Comes in various forms but generally asserts that the stockmarket’s earning yield should be compared to nominal interest rates.

However, once that point is conceded the practical problems soon emerge. For one thing, the predicted earnings of a firm can, in principle, stretch out to infinity. Estimating earnings one year or even five years into the future is one thing but reaching out to the longer term, even to infinity, is clearly another. The level of uncertainty quickly becomes extremely high.

Then there is the problem, already alluded to, of the most appropriate figure for earnings to use. One approach, popularised by John Burr Williams in the 1930s, was to treat earnings as equivalent to dividends. So the dividend discount model is based on the net present value of all future dividends. But besides failing to tackle the problem of dealing with the infinite future, this begs the question of whether dividends are the best measure of earnings to use. Other possible measures of earnings include cash flow and free cash flow.

Price-earnings ratio
The price-earnings (P/E) ratio is probably better seen as a family of metrics rather than one measure. Conceptually the idea is simple – divide the share price by the earnings per share – but because earnings can be calculated in several different ways this can therefore lead to radically different results.

Laurence Siegel, the research director at the CFA Institute Research Foundation, is sceptical about the use of the PE ratio. For one thing, he points to the high degree of volatility in reporting earnings. For example, companies can choose to write-off bad debts or worthless assets in some years but not to do so in others. That does not mean that they are breaking any rules but it does raise questions about what the ‘true’ earnings are from a valuation perspective.

Nor is the approach of using future earnings without problems. Although Siegel’s sees it as correct in principle, the perennial difficulty is that analysts tend to overstate their forecasts. It therefore makes sense to adjust them downwards to compensate for that temptation.

Although many analysts favour the Shiller P/E there are also reasons to be sceptical. For Siegel, the 10-year basis for calculation is an arbitrary figure. “I don’t know what’s special about 10 years. It seems way too long to me. We just recently rolled the 2008 disaster out of the 10-year average.” (See figure 2.)

However, the Shiller P/E has its fans. For example, Peter van der Welle, a strategist at Robeco, sees it as having an important attribute. “When you see sharp turning points in the earnings cycle the CAPE [cyclically-adjusted price earnings] really deviates from traditional valuation metrics. In that sense it has a discriminatory power.”

Stockmarket to GDP
One metric that does not help with individual stocks but arguably gives a good indication of overall stock market valuations is the stockmarket to GDP ratio or the Buffett indicator. At present, this indicator has the US market as just slightly expensive (figure 1).

The problem comes when using the metric to make comparisons over time or between countries. For example, Jeffrey Cleveland, chief economist at Payden & Rygel, points out that US companies have become much more internationalised over the years. That means historical comparisons of the ratio end up comparing a predominantly domestic market to a much more international one. “If you look at the S&P, for example, you could argue that that such comparisons don’t really make sense because so much of the earnings, the sales, that the S&P constituency is making are generated globally.”

Siegel instead points to the difference between different countries. For instance, in Germany, where private companies make up a large proportion of the corporate universe, the stock market is smaller relative to GDP. In contrast, in the UK, which has a particularly large universe of public companies, it is higher than might otherwise be expected.

Tobin’s q
The q ratio is the go-to number for those wanting to show stock markets are grossly overvalued. Its starting assumption is straightforward and relatively unimpeachable. Any stock’s market valuation should, all things being equal, be the same as the replacement value of its assets. So a company worth, say, €1bn on the markets, should be possible to replicate with an equivalent investment of the same amount in replacement assets. The current ratio of 2.5 for the US markets therefore suggests gross overvaluation. 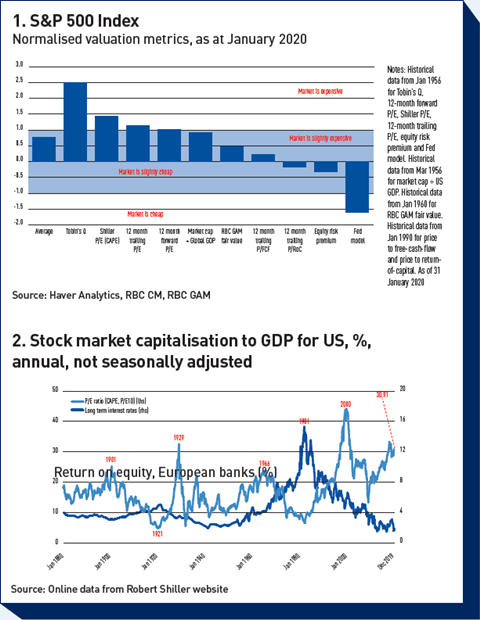 However, there is a standard riposte to this charge from those who are more sanguine about the markets. That is that the notion of the replacement cost focuses too much on physical assets it does not take into account of, for example, the value of brands or of human capital. From this perspective the q ratio might be applicable for old-style industrial companies but it is one-sided when it comes to dealing with modern corporations.

Fed model
If the q ratio is favoured by hard-core bears, the Fed model is at the other end of the spectrum. This approach, which the Federal Reserve has never officially endorsed, suggests the US market is still gloriously cheap at present.

Cliff Asness, managing and founding principal of AQR Capital Management, has slammed the Fed model in unequivocal terms. His objection is not a practical one – akin perhaps to the difficulty of measuring earnings accurately – but to its core premise. In a 2003 paper with the pugnacious title ‘Fight the Fed model’ he rejects it on the grounds that it compares a real number (the stockmarket’s earnings yield or E/P) to current nominal interest rates (Y): “The evidence strongly suggests that the Fed model is fallacious as a tool for long-term investors. Essentially, the comparison of E/P to Y is erroneous as it compares a real number (P/E) to a nominal one (Y). The important points is that the stock market’s P/E does not have to move with inflation since nominal corporate earnings already do so.”

End point
Perhaps the most apt conclusion is not to ditch all valuation metrics on the grounds that they have flaws but to see them as only part of the process of equity analysis. For example, those who believe that QE has inflated asset prices are likely to be sceptical of relative valuation measures in the current conditions.

In contrast, those who attach a high level of importance to brand value and human capital are liable to dismiss the applicability of the q ratio to most equity sectors. Some metrics are probably better than others but none of them provide a foolproof method of measuring the valuation of individual stocks or markets as a whole