2
ETFs rise to the challenge
Reports

ETFs rise to the challenge

Exchange-traded funds and products (ETFs and ETPs) have been one of the biggest investment success stories in recent years. Their stunning popularity meant that, despite the shock of COVID-19, they had taken in US$294bn (€247bn) over the six months to end-June 2020, compared with US$210bn over the same period last year.

Assets invested in European ETFs and ETPs were back over US$1trn at end-June, the third-highest level on record.

Whatever the prevailing market conditions, Deborah Fuhr, managing partner and founder of research firm and consultancy ETFGI, says one of the enduring strengths of ETFs is their versatility: institutional investors can use them within their portfolios in many different ways. Some investors use them to put money to work, equitising their cash or fixed income holdings. Others use them as building blocks to add a whole range of asset allocation tools to their portfolios. Still others use them as alternatives to derivatives. “ETFs can also be used as a core holding, with active strategies around them,” she continues. “Alternatively, they can be added as satellites, for instance, for thematic investing.” She says some investors are now using ETFs to tap into markets such as Australia, New Zealand and Germany, which appear to be handling COVID-19 debts more efficiently than others. 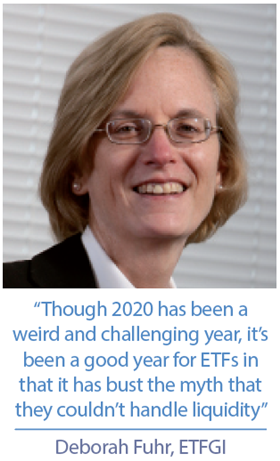 Other COVID-related themes are healthcare – such as companies involved in track and trace or vaccines – and technology, such as Zoom and other videoconferencing platforms, or cybersecurity. The recent sharp fall in airline travel and car usage, and the resulting beneficial effects on the environment, have also underlined the importance of environmental, social and governance (ESG) investing. Fuhr says ETFs can be used to factor this into portfolios, especially in Europe, given that European regulators are among the most proactive globally in addressing these issues, along with that of diversity.

Do your homework
In an era of lower for longer interest rates, fixed income ETFs had been perceived as potentially susceptible to liquidity issues in times of market volatility. Is this risk underestimated by ETF investors? Keshava Shastry, head of ETP capital markets, DWS, says: “All investment tools, including ETFs, are affected by underlying market changes and macro-economic conditions; an investor’s starting point must be their portfolio objectives. Fixed income ETFs reflect the performance of the benchmark they track and the price movements of the underlying bonds, which are influenced by market conditions and interest rates, among other factors.”

The COVID-19 market volatility led to a turmoil in fixed income markets and substantial dislocations between ETFs and their respective net asset values (NAVs), resulting in larger-than-usual premiums or discounts. Marcus Miholich, managing director, SPDR Capital Markets, says one factor was out-of-date or delayed NAV pricing. He says: “Fixed income liquidity became challenged and pricing more opaque than usual during the COVID-19 sell-off. Fixed income ETFs, however, tend to reflect more real-time sentiment and realistic pricing levels as to where the basket of bonds should trade.” As a result, he says, pricing on individual bonds can lag behind the real-time market sentiment and executable pricing levels reflected by the ETF, resulting in the appearance of large discounts to NAV. In some cases, the ETF price may be a better representation of actionable trade prices of the underlying constituents, when some bonds were not always quoted by dealers and/or the bid/ask spreads were very wide. “We would therefore argue that ETFs acted as an efficient price discovery vehicle and that premia/discounts were a natural result of more volatile market conditions,” he concludes.

Shastry suggests that another factor behind the ballooning discounts was the presence of discrepancies between NAV strike and ETF closing times. End-of-day NAV prices can be struck at a different time from the ETF’s closing auction, resulting in different values. Premiums and discounts use only one point in time, and do not capture intraday evolution, and many bond indices have different closing times, depending on the region. According to Miholich, the heightened intraday volatility in March exacerbated the impact of these timing differences.

Detlef Glow, head of EMEA Lipper Research, Refinitiv, suggests an additional factor behind the price dislocation. “We know from previous incidents that some risks occur from the investors themselves, as they may buy (too) large exposures in an asset class with less liquidity and then try to sell the whole position,” he observes. “This could lead to a price drop, especially when other investors also want to sell their positions at the same time.” As for the large discounts, Glow agrees that if there is a structural concern, this issue is caused by the trading/pricing of the respective bonds, and not by the ETF itself. “A possible discount is normally the result of the lower pricing frequency of some bonds in the respective index tracked by an ETF, as market makers try to estimate the next price of these bonds with a margin of safety,” he notes.

Here come the regulators
Global regulators monitor any new or growing market for stability and investor protection issues and have, over the years, raised concerns about the risks of using ETFs. Three years ago, at a Central Bank of Ireland conference in Dublin on the stability and growth of ETFs, Paul Andrews, secretary-general of the International Organization of Securities Commissions (IOSCO), acknowledged, according to the Financial Times, that ETFs were “financial engineering at its finest”. However, he also expressed concern as to whether ETFs could cope with pricing or liquidity shocks, if large numbers of investors pulled out during a period of heightened volatility or stress.

“The issue is, ETFs have grown phenomenally in assets under management, so do the regulations need to be changed?” says Deborah Fuhr, managing partner and founder of research firm and consultancy ETFGI. Last year, the Securities and Exchange Commission showed faith in the product by approving the “ETF Rule”, allowing ETFs meeting certain conditions to go to market without the expense and delay of applying for individual exemptive relief. This makes it easier for providers to bring new strategies to the market. “This has also improved transparency, and provoked new ETF product launches,” says Fuhr.

Keshava Shastry, head of ETP capital markets, DWS, says: “In the case of ETFs, the concerns appear largely to have been resolved: most regulators now acknowledge the advantages they provide, and their positive role in times of market stress. Central banks’ increasing use of ETFs to intervene in markets are another affirmation for the industry.” Indeed, last May the US Federal Reserve made its first-ever ETF purchases, and by end-June had reportedly amassed US$6.8bn-worth. The assets – both investment grade and high yield corporate bonds – were part of a raft of measures to quell market fears over COVID-19 and support the US economy.

The Bank of Japan has been buying ETFs for years to stabilise markets and support the economy, while the European Central Bank has indicated it may do so in future.

Meanwhile, there has been a flurry of pronouncements on ETFs from regulators, in view of COVID-related events. These include the Bank for International Settlements (BIS), which is owned by the world’s central banks, noting the discount of corporate bond ETF prices relative to NAVs, but pointing out that ETF prices tend to lead ETF NAVs.

The Bank of England (BoE), in its interim financial stability report of May 2020, agreed that ETFs had their advantages: “During the period of market stress in March, unlike in some previous stress events, investors may have found it easier to trade ETF shares than the underlying assets held by the ETF, and trading volumes in ETF shares rose significantly.” The report went on to say: “The differentials between the prices of ETFs and their daily NAV may suggest that the NAVs of open-ended funds were sometimes not factoring in the latest information during volatile periods.” The BoE’s view is that the lower ETF prices reflected liquidity conditions and costs of selling the underlying assets more accurately than NAVs. The BoE also highlighted the potentially risk-mitigating impact of a liquid secondary market for ETFs, which offers immediate liquidity and price discovery. It said: “The secondary market trading of ETFs means there is lower risk of a dynamic that incentivises the fire sales of their underlying assets.” But it admitted some ETFs do pose other risks: “Those ETFs that invest in less liquid assets while offering redemptions in cash can give rise to liquidity mismatch and result in procyclical investor behaviour.”

Flying colours
Whatever the reasons behind these discounts, have ETFs passed the liquidity test?

Fuhr says: “Though 2020 has been a weird and challenging year, it’s been a good year for ETFs in that it has bust the myth that they couldn’t handle liquidity. We have in fact seen them handle a significant number of volatile days, and a very significant number of redemptions and creations in all asset classes.” She adds: “ETFs have busted the myth of a structural problem. They have performed very well, and are a very good pricing source and tool for investors to get in and out of fixed income.”

“ETFs passed yet another test during the March market sell-off and subsequent rebound. Amidst the greatest market volatility that we have seen since 2008, the products performed exactly as they are designed to” - Brett Pybus, BlackRock

Brett Pybus, head of iShares EMEA investment and product strategy at BlackRock, shares Fuhr’s enthusiasm: “ETFs passed yet another test during the March market sell-off and subsequent rebound. Amidst the greatest market volatility we have seen since 2008, the products performed exactly as they are designed to. As underlying bond markets became more volatile and harder to trade, investors turned to ETFs to rebalance holdings, hedge portfolios and manage risk. Buyers and sellers were able to transact through the secondary market at real-time prices, accessing liquidity when they needed it most.” Glow points out that the European ETF industry has gone through a number of market crises since its inception in 2000. “None of these rough market environments delivered evidence that ETFs couldn’t keep up with the liquidity demand from investors,” he says. “In some cases we experienced the opposite, as we witnessed that ETFs on the Greek stock market were still trading, when other funds were closed during the euro crisis and the respective market turbulence in Greece.”

Health warning
Glow believes that the COVID-19 crisis was further proof that the trading mechanisms in Europe – which differ widely from those in the US – are functioning in challenging market environments. He also stresses the need for caution: “A liquidity mismatch is always a concern, and therefore the activity from all stakeholders in less liquid market segments needs to be monitored closely by all market participants, including regulators and central banks, to avoid a major market disruption.” Glow suggests that these reviews need to include general investor behaviour in the respective market segments, as liquidity concerns are not only driven by ETFs (and mutual funds).

He also cautions that a possible sell-off which might result in a liquidity issue might start in individual securities, and not across a whole market segment: “The ETF industry, and the fund industry as a whole, needs to bear in mind that not all market segments can be used as underlying assets for an investment vehicle that can be bought or sold within seconds, even if there is an investor demand for a respective asset class.”