Companies that thought they could get on with business as usual following the publication of the European Commission’s green taxonomy will be disappointed. Consulting on the renewal of its sustainable finance strategy, the European Commission for the first time has suggested the extension of the green taxonomy into the realm of ‘brown’ industries.

Indeed the ‘brown’ taxonomy, renamed ‘non-sustainable’ or ‘grey’ by civil society organisations to avert linguistic ambiguities concerning ethnic groups, is one of the few wholly new proposals it contains.

Released in the political context of both the EU COVID-19 rescue package, the EU Green Deal, and the appointment of a new college of Commissioners at end 2019, the aim is to update the vision outlined in the landmark 2018 sustainable finance action plan by the end of 2020. Most other aspects of the consultation concentrate on developing the conditions for monitoring and measuring ESG performance and products already outlined in the 2018 plan.

The aim of the non-sustainable classification would be to identify exposures to harmful activities and assets, and to disincentivise environmentally harmful investments. The consequences would be significant, as few industries or commercial sectors would be omitted from scrutiny if the taxonomies were taken together. The concept is thus applauded by ‘dark green’ ESG investors and non-profit organisations for its comprehensive outlook.

As Kate Levick, sustainable finance programme leader at NGO E3G, also points out, the integration of Paris Agreement objectives into the EU’s coronavirus assistance package is one of the key motivations driving the new list of unsustainable sectors. “The 2018 Sustainable Finance Action Plan focused on resetting the rules for private finance, but in the context of 2020 and economic recovery the key opportunities are to integrate sustainability into public finance mechanisms,” Levick says. Many mainstream private investment firms, meanwhile, have given a lukewarm reaction to the proposal or provided no response.

With major public finance organisations taking the lead on asset selection aligned with the green dimension, and perhaps divesting less sustainable assets, such signals would provide a powerful stimulus to other market participants. However, this discussion is not fully expanded in the consultation, although the role of public actors generally is under consideration.

Levick adds: “The European Commission could more explicitly address the future role of the European Investment Bank in reducing investment risk for emerging green sectors, such as distributed energy generation, that are experiencing particular market barriers.”

More popular among financial market players is the extension of the existing EU Ecolabel to investment funds, originally proposed in the 2018 sustainable finance action plan. “Currently, funds using national sustainable labels are not always allowed to be marketed on a cross-border basis,” says  Nicholas Pfaff, managing director and head of sustainable finance at the International Capital Markets Association (ICMA). “An EU Ecolabel giving a passporting right would be extremely valuable for both investors in terms of more choice and fund managers in view of the single market.”

At the same time, ICMA agrees with the proposal to ensure green bond verifiers are subject to further monitoring themselves. “It is logical that the organisations tasked with the verification or certification of an official standard such as the EU Green Bond Standard (GBS) are themselves subject to accreditation which could lead to formal supervision,” adds Pfaff. The EU GBS, he says, would in the medium term facilitate and mobilise additional green investment seeking an official standard aligned with the EU taxonomy.

The EU brand, which would be associated with quality, he suggests, could also further guide retail investors and contribute to converging national practices and labels. “If well designed, it could further stimulate this already growing market segment like the UCITS Directive did for funds in general,” Pfaff continues.

However, ICMA’s asset manager group, AMIC, expressed disquiet about definitions affecting products that could be described as green using the new climate taxonomy. It suggests that these could undermine the use of the label. “Provisions currently proposed are too restrictive…. some significant changes ensure the success of this new label,” it states. 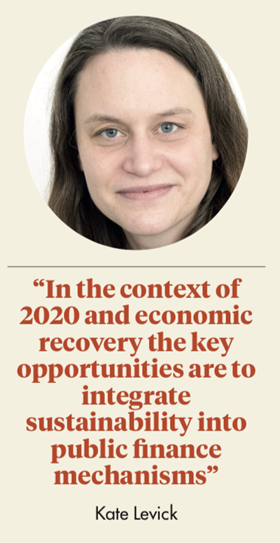 Following the launch of the taxonomy, few funds have been found to match it. Hence, AMIC has called for a broader list of eligible assets for diversification purposes but also to further support companies transitioning to a lower-carbon business model. However, the disclosure regulation affecting the identification of such funds and efforts to align with green definitions does not apply until March 2021. At the same time, expected amendments to the Non-Financial Reporting Directive, which would also provide more in-depth information on company alignment and influence green fund selections, have not yet been agreed.

Many anticipate an exciting new landscape of data following the implementation of these new disclosure rules. A central depot for that data, as proposed by the Commission in its consultation, could raise the profile of the EU’s climate transition.

The establishment of a freely available database is also applauded by ICMA. Some of the more rigorous individual ESG fund managers say this would, in addition, “democratise” data availability, although it could also change the role of ESG data providers.