The COVID-19 pandemic, alongside the associated economic shutdown, has had an unprecedented effect on EU member states

Given the substantial uncertainties around the impact of the COVID-19 pandemic, it is perhaps best to begin with a couple of certainties.

For a start, it is widely recognised that this is a crisis like no other. Governments instigated the global economic shutdown as an emergency measure to quell the impact of the pandemic. The downturn was not triggered by a financial crisis or by insufficient demand.

“It’s unprecedented,” says Florence Pisani, global head of economic research at Candriam. “The fact that we have stopped activity makes things very uncertain because it is an experiment we have never done in the past.”

It is also huge in scale. In April 2020 the International Monetary Fund (IMF) forecast in its baseline scenario that this would be the worst economic crisis since the 1930s. Since then, the IMF managing director, Kristalina Georgieva, has said its forecast may be too optimistic. This looks set to be a once-in-a-century event if not worse.

But the uncertainties, of course, remain huge. If there is a substantial ‘second wave’ of the pandemic the associated economic slump will be even worse.

On the positive side, if a vaccination is developed soon it would help economies return to normality more quickly. The most optimistic estimates suggest a vaccine may be produced at scale within a few months, although most say next year looks more likely. On the other hand, it is possible that, as with HIV, a suitable vaccine will not be found.

This article will focus mainly on the euro-zone. It is a region facing multiple complexities, even leaving aside the scientific challenges. The pre-existing tensions over the extent to which it can act as an integrated economic area are becoming more fraught. Although the European Central Bank (ECB) provides a unified monetary response, there are still formidable barriers to fiscal integration.

Three key questions will be considered. First, this article will attempt to gauge the scale of the crisis. This is a precondition for assessing whether any response is adequate. Second, it will assess the fiscal responses by member states. Finally, it will sketch out the challenges involved in formulating a unified euro-zone-level or even EU-level response.

Naturally the response of member states and policy at the euro-zone level cannot be neatly separated in reality. They are intertwined. Nor are fiscal and monetary policy completely distinct. But to untangle the main trends at work it is necessary to maintain these analytical distinctions.

The scale of the crisis
There is little doubt that the scale of the crisis hitting Europe – even leaving aside the possibility of a second wave – is huge. For example, euro-zone output fell by 4.5% in 2009 in the midst of the global financial crisis according to the IMF. In contrast it was forecast in April to fall by 7.5% this year. The European Commission’s (EC) forecast – released in May – was for the euro-zone to take a hit of 7.7% (see figure 1).

But although GDP is the standard economic metric for measuring economic activity, it is far from the only one. Other conventional measures include industrial output measures – released monthly – and sentiment indicators. 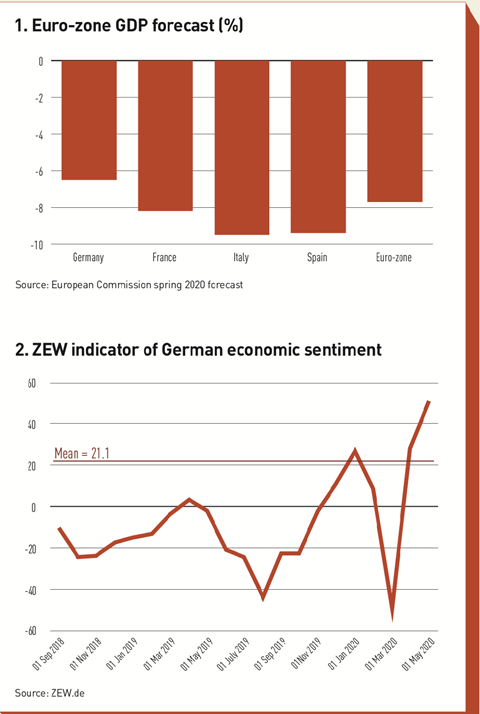 But perhaps most striking in today’s unprecedented conditions is the Google mobility data. These provide a way of measuring the extent to which an economy has been shut down. For instance, the report on Italy for 9 May showed retail and recreation down 63% from its baseline level, grocery and pharmacy down 28%, and transit stations down 52%.

It is also important to remember the scale of the crisis is highly uneven. Some countries are suffering more than others and some look likely to bounce back more quickly.

So, according to EC forecasts, output in Germany is expected to fall by 6.5% in 2020 - a painful drop, but significantly less than the euro-zone average – while Italy is forecast to suffer a 9.5% drop. Greece and Spain are also expecting falls of over 9%, whereas France is expecting a drop of 8.2%.

Carsten Brzeski, the global head macro research at ING, describes the impact of the pandemic on the euro-zone as an “asymmetric shock”. He points out that southern European states tend to be more vulnerable as they are more dependent on tourism and they have a higher proportion of smaller companies.

It is also striking that, at least at the time of writing, business sentiment in Germany seemed to be bouncing back quickly. The ZEW Indicator of Economic Sentiment rose to a positive 51 rating in May compared with a negative 49.5 in March. The mean level is 21.1 (see figure 2).

The overall picture is that everyone is suffering as a result of the COVID-19 crisis, but some are feeling significantly more pain than others. As Pisani says: “It will increase the divide within countries and between countries.”

The response of member states
If the impact on member states varies greatly so to does the scale of their responses. As ING’s Brzeski says: “There are huge discrepancies in the size of the fiscal policy response.”

Untangling the exact scale of the response is tricky because it can include a range of measures. These can include tax and spending measures, loans and guarantees, and the operation of existing safety nets. It is an ongoing story as new measures are being announced all the time.

Consulting the tracker, is it clear just how diverse the responses are even within the euro-zone.

For example, Germany’s federal government has announced a supplementary budget of €156bn or 4.9% of GDP. This includes increased spending on healthcare, expanded access to short-time working schemes (Kurzarbeit), grants for small-business owners and expanded duration of unemployment insurance. It has increased access to public guarantees for firms through the newly created economic stabilisation fund (WSF) and the public development bank (KfW). In addition to the support from the federal government, many federal states (Länder) have announced their own measures. These amount to €48bn in direct support and €73bn in state-level loan guarantees.

In contrast, Italy got off to a slow start with the Cura Italia emergency package announced in March only amounting to 1.4% of GDP. However, since then it has announced two more fiscal packages. Altogether they will generate net borrowing of 7.1% of GDP,  according to official figures (see article in this report).

More generally,  the scale of the loosening in Germany looks set to be significantly higher than the euro-zone average. Brezeski says southern European countries are generally anxious about substantial fiscal loosening “as they are afraid of surging debt levels and the possibility of another debt crisis”.

EU level
It is on the euro-zone level, and that of the EU more generally, that things become more complicated. Monetary policy is relatively straightforward as there is at least an established framework for united action under the ECB. However, even in this arena things are not entirely straightforward. In relation to fiscal policy, where the region is still far from fully integrated, matters become more contested. 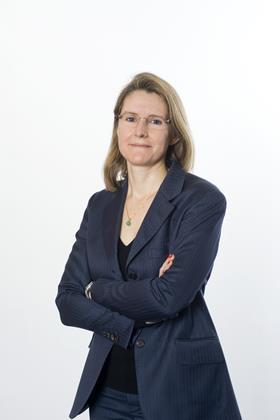 In response to the COVID-19 pandemic, the ECB has introduced the $750bn (€686bn) Pandemic Emergency Purchase Programme (PEPP). This involves buying several different types of assets, including government debt and corporate debt. The scale of the ECB intervention is formidable, although not as massive as that of the US Federal Reserve, which increased its balance sheet by almost $3trn in under three months.

However, a decision by the German constitutional court in Karlsruhe has made the ECB’s life more complicated. The court ruled that the actions by the ECB in an earlier quantitative programme (QE), the Public Sector Purchase Programme (PSPP), looked to have failed what it described as a “proportionality” test. It gave the ECB three months to justify its earlier actions.

Gero Jung, chief economist at Mirabaud, says that “in the short term this is unlikely to see major effects”. However, in the longer term it could make things more difficult. “It could restrict the capacity of a confident ECB bazooka.”

But, if anything, it is the symbolism rather than the practicalities that is most important. The ECB’s decision raised the still-unresolved question of sovereignty. Does the final say on such matters lie at a national or supranational level?

A similar conflict bedevilled an attempt to launch ‘corona bonds’ – mutualised debt jointly issued by euro-zone governments. France led the initiative, supported by other southern European countries, but it was blocked by the frugal northern euro-zone countries led in this case by the Netherlands but supported by Germany. 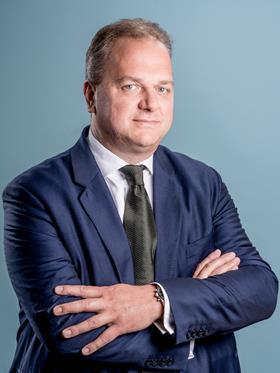 “In the short term [QE] is unlikely to see major effects. [However], it could restrict the capacity of a confident ECB bazooka” - Gero Jung

Instead, France and Germany have come up with a proposal for a $500bn EU joint-fiscal package to fund post-crisis recovery. The recovery fund would be used to buy bonds issued on the capital markets. These funds would be passed on to member states as grants rather than loans so, in effect, it would mean a fiscal transfer between countries. That is why Capital Economics, a London-based economic consultancy, said its implementation would mean that “the EU would cross the Rubicon towards fiscal union”.

The proposal was greeted with excitement by many European leaders. For example, Olaf Scholz, the German finance minister, told Die Zeit newspaper that Europe was approaching a Hamiltonian moment – making an analogy with the US federal government taking responsibility for state debts in 1790.

However, it is easier to declare such a shift than to implement it. As Guntram Wolf, the director of the Bruegel think tank in Brussels, wrote: “The EU will not be able to avoid a debate on its own treaties as it lacks the right legal base for a true Hamiltonian moment.”

In practical terms, the package needs the unanimous support of all 27 EU members states to be approved. Even if it if not rejected outright it is likely to be watered down along the way.

In conclusion, there is no doubt that the euro-zone, and Europe generally, is facing a severe economic crunch as a result of the COVID-19 pandemic and the measures taken to quell it. There are many uncertainties, although it is clear that the impact of slump, and the capacities of countries to cushion the blow, will vary widely. The EU will attempt to provide a more unified response but its capacity to do so is limited by the incomplete character of fiscal integration.