At the start of 2019 there were high expectations that the year was going to be significant. Seeing the implementation of IORP II legislation and the reforms outlined in the government’s Pensions Roadmap published in March 2018.

There was concern that no legislation or regulations to transpose the IORP II directive had been published. But no-one thought there would not be any legislation or regulation by the end of 2019, and no indication as to when the directive will be transposed. As a result, Ireland is now subject to infringement proceedings by the European Commission.

In the Pensions Roadmap, the government set out measures and actions addressing private and public sector issues, retirement in general and the introduction of auto-enrolment. Unfortunately, there is a similar story with the reform measures planned for 2019, with little progress made.

It was encouraging that the Roadmap set deadlines and allocated responsibility to government departments, inter-departmental committees or state agencies. A number of consultations took place in 2018, but most of the deadlines have now passed with little visible progress.

Unsurprisingly, much of the government’s focus has been on Brexit. It is also hard for the current minority government to progress issues. However, there is a consensus that we do need pensions reform and it would be disappointing if the Pensions Roadmap goes the same way as previous reports that made the same recommendations.

There has been some progress in the development of auto-enrolment, although the original proposal to bring legislation in the first quarter of 2020 is not going to happen. Following the original consultation, the Department of Employment Affairs and Social Protection published an ‘Update and Next Steps’ document last October. 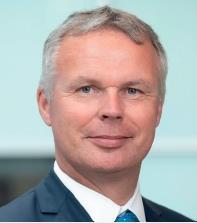 This confirmed many of the original aspects of the proposal. Auto enrolment will apply to employees between 23 and 60 earning above €20,000 per year (across all employments).

Members can only opt-out from the beginning of the seventh month until the end of the eighth month. There would be limited opportunities for members to suspend contributions. Members who opt-out will be re-enrolled every three years.

The state will establish a Central Processing Agency (CPA), which will tender for providers and establish minimum standards and product features. Employees will be responsible for selecting a provider or will be allocated one by the CPA should they not choose. The CPA will seek to set annual administrative, management and investment charges of no more than 0.5% of assets under management.

There are still a number of aspects to be decided on, namely:

• Scope and role of the CPA;
• Nature and functions of the registered providers;
• Investment framework and funds to be offered by registered providers, including, the design of the default fund;
• Decumulation/pay-out phase;
• State financial incentive.

With these decisions still outstanding, and a general election on 8 February, the proposed start date of 2022 seems highly optimistic.

Business as usual
In the meantime, pension schemes continue to invest members’ savings and pay out benefits to pensioners. While investment markets were positive, low to negative yields on government bonds keep the pressure on defined benefit schemes and annuity pricing.

There has been a recovery in the funding levels of defined benefit schemes over the last decade. Figures published in 2019 by the Pensions Authority showed that 84% of schemes met the minimum funding standard. More importantly, total assets exceeded total liabilities by over €7bn.

Many DB schemes are now coming to the end of funding proposals or recovery plans put in place to address deficits, and there is a continuing shift to bonds and alternative assets. The IAPF’s latest Annual Investment Survey shows that, at the end of 2018, total pension schemes assets were €143.3bn (figure 1). Of this, €90.7bn was in DB schemes with €52.6bn in DC schemes. Equities comprised 27% of DB assets with 40.8% in bonds and 21.6% in alternatives (figure 2). Dealing with low or negatively yielding bonds and sourcing alternative returns continue to exercise trustees, as it does across the world. 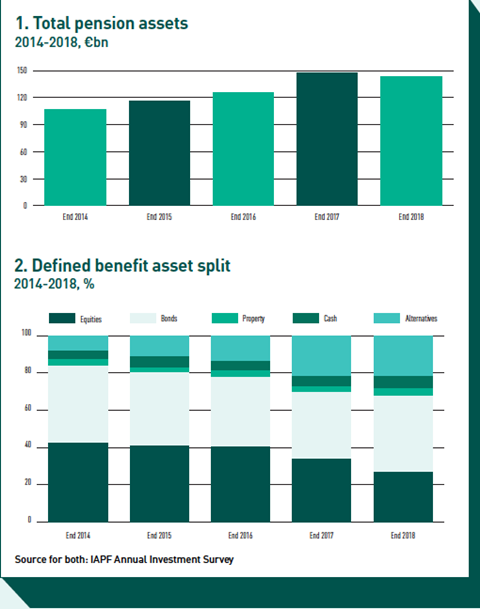 DC schemes continue to grow and mature. We see many schemes increasing contributions, or at least those available to members through matching or phasing. However, there is still a challenge to get members to make use of them. A recent survey by the Central Statistics Office found that 36% of employees who had not joined their employer’s pension scheme said this was because “they had not got around to it”.

ESG matters were also on the agenda in 2019. This was partially driven by the requirements in the IORP II directive for schemes to begin reporting on how they factor ESG into their decision making.

Obviously, there is considerable emphasis on ESG at present and this feeds into trustees’ considerations. Increasingly, trustees are viewing ESG as a risk management issue and understand the need to consider the impact of issues like governance and climate change on their investments, particularly over the long term.

Overall, 2019 was disappointing in terms of policy progress. Ireland still has a very young population, but that is exactly why we should be addressing long-term issues and preparing for the impact of ageing over the coming decades.