Central Securities Depository Regulation (CSDR) was one of the key measures to be introduced within the EU following the global financial crisis of 2008.

Central securities depositories (CSDs) operate the infrastructure underpinning post-trade securities settlement systems, in particular holding the securities themselves, either as certificates or electronically.

A CSD can be national or international (ICSD). Many countries have one domestic CSD which is traditionally associated with the national stock exchange and usually heavily regulated by the government.

CSDR aims to standardise the authorisation and operation of CSDs across the EU, as well as harmonise activities throughout the financial market infrastructure. The aim is to reduce the higher risks and costs for investors engaged in settlement across borders.

The regulation was adopted in 2014, but its wide-ranging provisions have been implemented in phases.

The last to take effect – the settlement discipline regime – has three main features:

It was due to be implemented this coming September but last February, the European Securities and Markets Authority (ESMA) announced its postponement until February 2021.

The announcement followed a co-ordinated lobbying effort by a group of industry bodies. 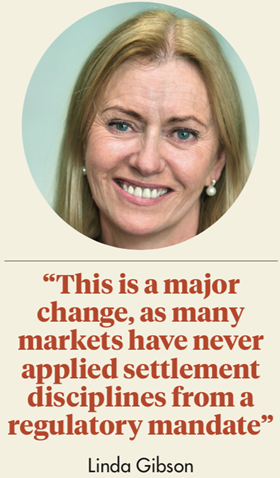 ESMA said that additional time was needed to establish certain essential features of the regime, and that the new functionalities needed to be tested properly.

She adds: “While the delay was welcome, the industry still has concerns regarding the mandatory buy-in regime, which has significant implications from a trading and liquidity perspective.”

“There is a commonly-held view from industry that regulators should first take stock of what impact the cash penalty regime has on settlement efficiency before requirements on mandatory buy-ins are introduced,” Gibson says.

“There are some concerns that the mandatory nature of buy-ins may cause liquidity and stability issues within the market in the absence of an agreed pass-on mechanism,” says Robert Angel, global head of regulatory solutions, Northern Trust.

These concerns have prompted proposals to be made to ESMA and the European Commission to consider changing buy-ins from mandatory to an optional right underpinned by law.

More generally, however, the inherent complexity of the settlement process means that harmonisation was always going to be a painful process. 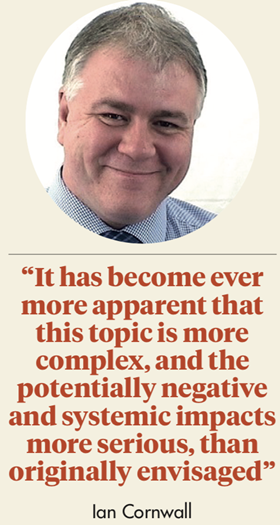 “While controversial, the aim was relatively simple – to improve overall market performance via mandatory penalties and buy-ins which would act as stimulation to encourage market actors to settle on time,” says Ian Cornwall, director, head market structure, SIX Securities & Exchanges.

The Swiss exchange is outside the EU’s regulatory remit but, as an international player, its business is affected by CDSR. Cornwall says it is having to adopt certain measures and is actively engaging to find workable and effective solutions for the benefit of the wider industry.

But he continues: “Given the complexities of the market infrastructure, the interactions of the many actors operating or intermediating in the arena, and the impact a common and harmonised process would have on different product segments, it has become ever more apparent that this topic is more complex, and the potentially negative and systemic impacts more serious, than originally envisaged.” 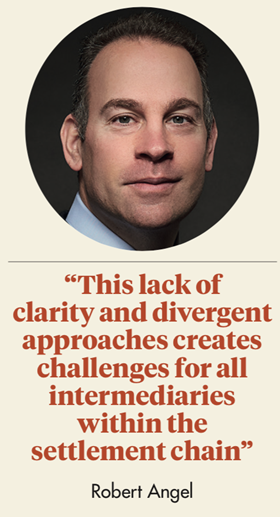 Among the entities affected by the new regime are CSDs and ICSDs, central counterparties (CCPs), and custodians. Cornwall says the process of developing a common technical solution across these entities – which together must ensure the accurate collection and distribution of penalties, and an effective buy-in process – requires intensive negotiations and the roll-out of a complex technical and messaging solution to all market actors.

Another aspect of the practical challenges is that individual market participants are not necessarily clear about their own approach to implementing the changes.

“There is a lack of clarity and harmonisation among CSDs on how they each plan on implementing and supporting CSDR for both cash penalties and buy-ins,” says Angel.

“This lack of clarity and divergent approaches creates challenges for all intermediaries within the settlement chain, from the direct participant of the CSD all the way down to the trading counterpart, to finalise their own scope and any subsequent development.”

He says the longer these questions remain, the more pressure there will be, on top of the need to be ready to support CSDR in February 2021.

“There is also the consideration of allowing sufficient time for marketwide testing prior to the go live,” he says.

Nevertheless, trade associations such as the Association for Financial Markets in Europe (AFME) and the Association of Global Custodians (AGC) have been working closely with the European Central Securities Depositories Association (ECSDA) to highlight the challenges and to expedite answers and decisions from CSDs.

But given the complexity of the task, it is perhaps not surprising that ESMA itself is being lambasted for a lack of clarity.

“As it currently stands, there remain some issues where market players are seeking clarity on how the process will operate, noticeably in the bond markets,” says Cornwall. “The remedies across the market are still subject to delivery and testing of technical solutions and final development of robust messaging standards to support them.”

And he warns: “Even with the current extension to February 2021 the clock is ticking. If all these matters cannot be effectively resolved and adequately resourced in time there remains a systemic risk that the markets will suffer material disruption.”

A further twist to an already complex situation has been added by COVID-19. “The crisis and associated volatility demonstrated why the principles of CSDR are needed now more than ever, but also highlighted how unprepared some parts of the industry are to meet it,” says Gibson.

“During March, the market experienced a spike in settlement fails due to the significant increase in trade volumes and a lack of straight-through processing. This was at a time when firms were already experiencing operational challenges due to remote working, and adapting technology and processes to be able to continue to operate during the crisis.”

But even after the tsunami of national lockdowns throughout Europe during March, there was a further setback for the industry in grappling with the new regime.

In May, the EU Commission rejected a request from a joint industry letter for a 12-month delay on implementing Shareholder Rights Directive II.

“These are clearly separate pieces of legislation and would be reviewed on their own merits, but there is now real concern within the industry about the mechanics of the mandatory buy-ins,” Gibson warns. “Our clients, as well as the wider industry, are concerned about a lack of clarity on buy-ins. To date, the regulators have provided the ‘what’, but there is a lack of clarity on the ‘how’.”

But she notes: “As we saw in MiFID II, the industry associations are stepping in to fill the gap on how buy-ins could operate and also call for a delay. We ourselves are joining this work. There is still hope that with further dialogue with the European Commission that changes can be made to this approach.”