Political decisions have damaged Romania’s second-pillar system. How will it respond to a change of government and a bullish stock exchange?

After a turbulent two years, Romania’s pensions industry may finally be afforded a respite.

In October, the Social Democratic Party (PSD) government, long the scourge of the second-pillar system, was evicted after Prime Minister Viorica Dancila, the third since 2016, lost a no-confidence vote.

Her successor, National Liberal Party (PNL) leader Ludovic Orban, heads a centre-right minority government that the pensions industry hopes will undo some of the damage inflicted by the PSD.

The PSD started its assault on the second pillar in 2017. Mihai Tudose, Dancila’s predecessor, indicated that it would become voluntary, and that both management fees and contributions would be cut.

The reduction in contribution rates, the first since start of the second-pillar system in 2008, took effect in January 2018. They fell from 5.1% of gross wages to 3.75%.

In December 2018, under a government emergency ordinance (GEO 114/2018), further participation in the second pillar became optional, although any funds accumulated in the system would remain under private management. It also slashed fees, with the initial part of the administration fee lowered from a maximum 2.5% to 1%, of which 0.5% would go to the National House of Public Pensions, the state pensions administrator.

The most controversial measure was a proposal to raise the contributed capital of the seven second-pillar funds from a fixed €4m to 10% of contributions, equivalent to about €800m. This raised the spectre of six of the seven funds threatening to pull out of Romania.

The measures provoked widespread criticism, from bodies such as the Romanian Pension Funds’ Association (APAPR), the Financial Supervisory Authority (FSA) and Bucharest Stock Exchange, and internationally from the European Commission, IMF and PensionsEurope. 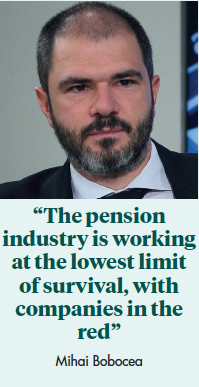 This backlash had some effect, in that the capital increased was eventually lowered to an overall €80m, with the full sum due by the end of 2019, but the rest of the measures remain in place. Construction workers have also been removed from the system.

According to Mihai Bobocea, adviser to the board and spokesman for APAPR, these combined measures have reduced pension companies’ net revenues by an estimated year-on-year 60% in the first half of 2019, pushing them to report their first losses in seven years.

“Currently, the pension industry is working at the lowest limit of survival, with companies in the red,” says Bobocea. “The industry is heavily regulated (with 66% of all expenditures being regulation-driven in 2018) and the emergency ordinance passed by the previous government is basically forcing companies to function at a loss and bring additional capital, a situation which cannot work at all in the long run.”

Returns also took a hit, with 12-month returns averaging only 1% as of end-2018. “They were heavily hit by the last-minute adoption of the emergency ordinance which hit the entire financial sector including pension funds, banks and the stock market,” says Bobocea. “Returns have since then recovered with the softening of the capital requirements for pension fund companies and the market positive sentiment regarding the likelihood of the cancellation of the negative regulations.”

Following a significant market recovery in May (see Bucharest Stock Exchange box), 12-month average returns had surged to 8.38% by the end of September 2019 and an average annualised 8.42% since the system’s inception. 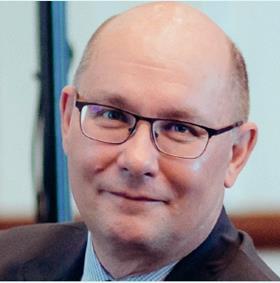 Assets increased not only because of the exchange’s bull run but as a result of salary rises. According to the National Institute of Statistics, at the end of September 2019 wages had grown by 14.7% year-on-year in nominal terms, and 10.8% net of consumer price inflation.

The pensions industry has survived thus far, and it could take comfort from the new labour minister’s statement that the government wants to raise second-pillar contribution rates, albeit not at the expense of the first pillar. However, the government has inherited the PSD’s spending plans, including raising the main pension point parameter by 15% in September 2019 and by 40% the following year. This policy is viewed as the main reason why the PSD wanted more revenues from, and less contributions to the privately managed system.

It is also seen, along with public sector wage rises, as pushing Romania’s budget deficit beyond the EU’s 3% limit in 2019. As of November 2019, it had already reached 4.3%. Furthermore, local and general elections in 2020 constrain the PNL’s room for manoeuvre if it wants to remain in power. Orban has already stated that the 40% pension hike will remain in the new budget.

With about 90% of assets invested locally, Romania’s pensions funds are key players in the country’s capital markets.

According to Mihai Bobocea, an adviser to the board and spokesman for APAPR the second-pillar funds account for 15% of the Bucharest Stock Exchange’s trading volume and 20% of estimated equity free float, making performance sensitive to pension policies and developments.

In 2018, the main BET index ended the year 4.8% down. As the exchange noted, the downward trend was triggered on 19 December 2018, “following the public information regarding additional taxation in banking, energy and telecom sectors, as well as changes in the second-pillar pension system. On that day, the BET index plummeted by 11.21%, wiping out in a single day the entire increase the capital market had seen in the entire year.”

The trend has since recovered, so much so that the exchange was one of Europe’s strongest performers in 2019. Its bull market started in May, with all indices posting double-digit growth in the first five months of the year. Although international and domestic factors played their role, the exchange described the government’s decision to amend the proposed capital requirements for second-pillar pension funds as “the most important decision for the local environment”.

As the exchange noted, “Pension funds are strong institutional investors who invest heavily in the Romanian economy. By clarifying their situation, the local capital market, which includes Romanian companies that account for more than 10% of Romania’s gross domestic product, can re-enter into an area of normality and resume its ascent to a possible promotion to emerging market status.”

This promotion was achieved in September, when FTSE Russell upgraded Romania from frontier to secondary emerging market status. This takes effect in September 2020.

“From our Romanian member, I have the impression that the pension industry is moderately optimistic that the new government would further ease measures taken against the second-pillar pension companies, but they also understand that there are more urgent priorities for the new government,” says Matti Leppälä, PensionsEurope’s secretary general and CEO.

“Thus they are hoping for the best but not assuming that there will be improvements any time soon. But the political climate remains volatile and that in itself is not optimal for good long-term pension policy that supports funded pensions.”