The Russian government has increased the pension age for the first time since 1932. According to the reform retirement is being postponed by five years. Women can now claim a pension at 60 while men must wait until 65. To avoid unintended effects and smooth the transition, the regulator has determined a transition period of 10 years, with a gradual increase of pension age. It is anticipated that the process will be complete by 2028.

While pension reform seemed to be a surprise for Russians, its requirement has been evident for five years.

Structurally, the Russian pension system is based on a three-pillar approach where insurance pensions and funded pensions can be supplemented by voluntary pension plans.

Before 2014, the insurance pension comprised of a 16% employer contribution to the state pension fund, while the funded pension pillar required an additional 6%. In 2014, the regulator froze the 6% contribution. Instead, all contributions were redirected to the insurance element; the government was looking for resources to fulfil its current pension obligations. 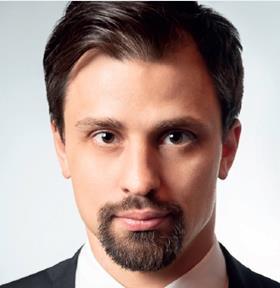 Despite the original promise to reverse this decision within two years, this has not happened. Moreover, it is obvious that even the joint financial sources are insufficient in the long term. The regulator faced a choice of whether to increase contributions or change the retirement age. The second option importantly did not place additional pressure on employers. In mid-2018, a special regulatory bill outlining the changes was approved by the State Duma of the Russian Federation.

Officially, a decrease in the birth rate and an increase in life expectancy were named as key reasons for such a unique reform. In other words, the working population cannot maintain the pension provision to those who have already retired. This problem is not unique, as we see a tendency towards higher retirement ages in developed countries. This global trend supported the Russian pension reform.

Sops to the dissatisfied
However, the retirement age will remain the same for some employment sectors. These include healthcare workers, military personnel, women with three or more children, among others. By granting such exceptions the government is trying to reduce the negative effect of the reforms.

Another exception under discussion is the non-state pension sector. There are proposals to apply the previous conditions to those with voluntary pension plans. Both corporate and individual pension plans are served by non-state pension fund providers. The Russian government considers non-state pension as one of the ways to increase the income replacement rate, which is 30-35% and has remained the same since 2000.

However, the popularity of non-state pension institutions is low, caused in the main by the lack of a state guarantee.

“The popularity of non-state pension institutions is low, caused in the main by the lack of a state guarantee”

This is a reflection of Russia’s  episodes of financial crises and economic uncertainty. The second reason is the lack of financial literacy on retirement plans and saving tools. For instance, a minority of companies offer corporate pension plans and having a private pension plan is even rarer.

A false start
Another option to improve the income replacement rate would have put individuals in charge of their retirement savings through the concept of Individual Pension Capital (IPC). This refers to the idea that every employee should transfer between 1% and 6% of their salary to a pension fund (either state or non-state) in order to form their retirement income. The funds would have been accumulated on the personal account of the individual, ringfenced from being used to meet current pension liabilities.

It was initially planned that IPC would replace the funded pension pillar and become the solution to the 2014 contributions freeze. IPC supporters insisted that they would lighten the burden on the state pension fund and create a source of long-term money necessary for the Russian economy.

However, most Russians do not support IPCs. Concerned by the pension age reform – which they see as a ‘shot in a back’ that should not have been approved – their readiness to accept a new pension concept was close to zero. In addition, in contrast to a funded pension scheme where contributions are to be paid by employers on top of salaries, IPCs placed the onus on the employee, effectively amounting to a reduction in pay.

Consequently, in mid-2019, the regulator declared that IPCs would be postponed indefinitely. Instead, the Ministry of Finance has started to develop the Guaranteed Pension Plan (GPP).

The GPP is to be voluntary, with state guarantees, and a range of tax incentives. Full details of this model were set to be announced by the end of 2019.

Overall, Russia’s pension system is undergoing active changes to adapt to reality and prepare for the long term. The challenge for the government remains the low level of trust in the pension system and the serious negative effects from the retirement age reform. 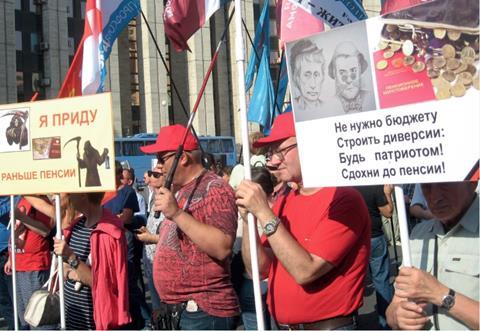 September 2018 saw concerted protests against pension reform across Russia, including this demonstration in Moscow