3
Investor Strategy: Looking over the hedge

Investor Strategy: Looking over the hedge

• Some institutional investors do not currency hedge because of limited exposures.
• The cost of getting a hedge wrong can be prohibitive.
• The ability to add value through strategy is contentious.
• The relaxation of quantitative easing could mean pension funds will be compelled to add value through currency strategies to return objectives.

Currency trading has ever been an arcane art, viewed by many as akin to reading runes or haruspex (gleaning your future from the entrails of a chicken). Worse, in some ways, because at least with the latter you get the drama of the sacrifice.

Recently, political concerns have affected currency markets. Sterling peaked against the euro during 2015, trading at more than €1.4, and has been dragged down by Brexit concerns to below €1.1 in August.

The euro-to-dollar trade has been less volatile, although the euro slipped from 2014 into 2015 and has enjoyed a pick-up since late 2016, benefiting from the uncertainties of the Trump administration.

Uncertainty can run both ways and in September following the German election, the euro suffered its biggest 2017 fall as the Christian Democrats looked at putting together a coalition without the Social Democrats.

Some institutional investors do not currency hedge because their exposures are limited. Michael Dittrich, head of finance and asset management at the German Federal Environment Foundation, explains: “We do not use currency in our asset management. We are euro investors. We have a little dollar, sterling and some other European currency assets, mostly equities, at around 5%. So we have no real experience in this asset class. The reason why we do not use currencies is that we support our projects, also only in euros.”

The UK’s NEST scheme has also not made use of hedging strategies. However, says its chief investment officer Mark Fawcett, “with more than £2bn under management, the question is moving up our list of priorities”. He adds: “The impact of Brexit will likely accelerate this.”

The unpredictably of currency markets begs the question how institutional investors address the volatility this generates. Indeed, this question is two-fold: how best to hedge out currency volatility – if one should try at all – and is it possible to add value over time through seeking to take advantage of currency market trends and anomalies? 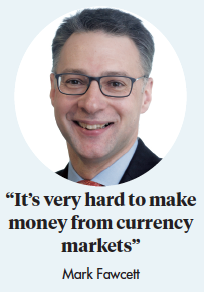 Foreign exchange is a zero-sum game – one trader’s gain has to be another’s loss – which distinguishes it from other assets such as equities or bonds. However, used to dampen volatility, foreign exchange can increase the risk-adjusted return of a portfolio, allowing funds to spend their risk budget elsewhere.

Such smoothing is the most common use of currency hedging. For example, Dominik Irniger, head of asset management for Pensionkasse SBB says it uses “a systematic currency overlay management that reduces the major forex exposures to predefined and optimised strategic levels”.

Harrie Dielen, senior adviser investment management strategy, at PGGM explains further: “Most Dutch pension funds are not allowed to increase investment risk as long as their solvency ratio is below certain levels. Lowering hedge ratios – which is the same as adding currency exposure to your portfolio – therefore requires that you diminish risk elsewhere in your portfolio, for example by selling equity and buying bonds. This is undesirable because it leads to lower expected returns.”

However, having some currency risk may be beneficial, says Wilbrink, as, “on a day-to-day basis, stock markets are largely driven by sentiment. Stock markets move up and down in unison. Having some currency risk reduces some of this day-to-day, sentiment-driven correlation.” Therefore, depending on index and time horizon, Wilbrink says the optimum hedge is between 50% and 90% (see figure).

Drawdown risk management requires hedging to safe-haven currencies – although what constitutes a safe haven is conditional on the crisis. 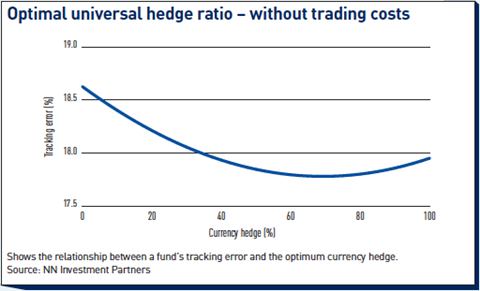 The three models are different in nature and execution, however: “Since all three purposes result in different currency-hedging strategies, it isn’t possible to fulfill all three objectives,” says Wilbrink.

In common with conventional asset classes, the more actively a currency is traded, the deeper the market, and the lower the cost. Karen Heaven, managing director, investment consulting, at the UK-based consultant Redington, says: “Cost and complexity may be seen as disadvantages to forex hedging, although it is typically relatively cheap and simple to implement, especially for major currencies, so it is only a weak disadvantage.”

Nevertheless, the cost of getting a hedge wrong can be considerable. Hedges are done through forward trades. These, in contrast to taking out an equity position, don’t need to be funded. They do, however, need to be settled. These sums can be large.

Being more illiquid, emerging market (EM) currency hedging is more expensive. For some, such as Heaven, this makes it prohibitive: “We don’t recommend hedging emerging markets currency risk, as we believe that emerging markets assets provide additional expected returns due to the higher interest rates in emerging economies, which would be lost by FX hedging.”

NNIP’s Wilbrink, also, warns that “some currencies are illiquid and hedging causes disproportionate costs”. However, NEST’s Fawcett argues that “currency factors are clearly part of the asset class returns” in emerging markets, and the fund’s underlying manager is permitted to make the currency call it feels appropriate. 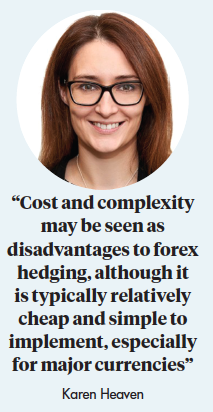 PGGM’s Dielen adds, with regard to the difference between emerging and developed market hedging: “The expected return of a hedged portfolio is the same as the expected return of the same unhedged portfolio.  This assumption is not true for emerging market currencies. With these currencies, interest-rate differentials are seen as a return driver. So the usual approach among pension funds there is to accept the currency risk.”

The ability to add value through currency strategies is contentious. Heaven says: “We do not hold active views on particular currencies, as we haven’t seen evidence that consultants are able to do this consistently well. SBB’s Irniger holds a similar view. Fawcett explains: “It’s very hard to make money from currency markets, despite the claims of some managers, who believe some market participants are price-inflexible because of their investment remits, and they therefore argue it’s possible to add value playing against them.”

Dielen, on the other hand, says “currency strategies can add value if you treat them as an asset class”.

Millennium Global runs active currency strategies, so it is no surprise that Charles Goodman, its global head of business development, reckons it is possible to add value, giving an example of how a currency manager might use a pension fund’s existing risk budget resulting from currencies: “Hedge the dollar exposure ‘inherited’ with a US equity portfolio and transform it into Swedish krona, Swiss francs or wherever they see the best opportunity.”

What is more, Goodman says that, in a post quantitative easing world, pension funds will be compelled to add value through currency strategies to meet their return objectives: “Without central banks supporting asset prices, pension funds will need to look for more sources of uncorrelated alpha, which currency management can provide. With traditional asset class returns under pressure and increased currency volatility, the potential returns from currency could be bigger in both absolute and relative terms.”

Whatever the ability of managers to add value through foreign exchange, it seems that – because pension funds have their liabilities in one currency but their exposures in a number of them, coupled with increasing global policy divergence – they will, as at NEST, move hedging up their investment agendas.