Euro-zone investors are not immune to global currency vagaries

It is all too easy for euro-based pension funds not to think carefully about their base currency. If their asset allocation is primarily domestic, then matching liabilities and assets seems, at least in principle, a relatively simple matter. Currency does not appear to be an important part of the calculation. If they have substantial overseas assets, then foreign currencies are their concern – the dollar, the yen, the Swiss franc and so on – rather than the euro.

A moment’s reflection should show that such a view is an over-simplification. Currencies are an inherently relative game so a euro-zone investor taking a view on, say, the dollar is likely to be assessing the US currency relative to the euro. The dollar does not exist as a free-floating entity. As Ugo Lancioni, head of global currency at Neuberger Berman, says: “When you take a view on a currency you always have to make an assessment on two fronts.”

But even a portfolio invested entirely in euro-zone-based companies could have a large foreign exposure. Consider the likes of blue chip firms such as Carrefour, Daimler, ENI, Inditex, Philips, Volkswagen and Total. Typically they have substantial investments and trading relationships overseas. Some may also have significant debt denominated in foreign currencies.

Arguably, even a decision to stay wholly invested in euro-zone-based companies would itself involve a form of currency choice – albeit not necessarily a fully conscious one. It represents an implicit preference in favour of the euro against other currencies. Such a move may or may not turn out to be wise but, either way, it is a form of selection. 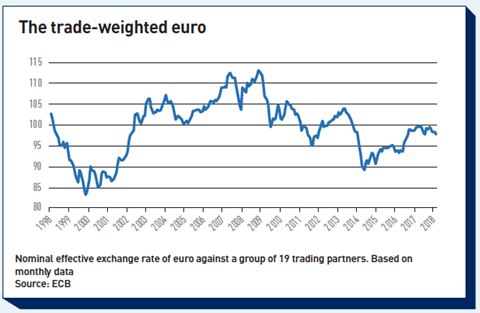 From an analytical perspective there are, of course, several ways to approach currencies. One important distinction is in relation to time horizon. The forces that move currencies in the short term are not the same as those that drive them in the long term. Indeed, they can sometimes push currencies in opposite directions. One task for currency managers is to try to disentangle the forces at work.

James Wood-Collins, the CEO of Record Currency Management, says it helps to divide the euro into three “buckets” – tactical, strategic and existential. The first two are clearly concerned with time horizon while the third is about the long-term viability of the single currency.

From the perspective of a long-term investor, such as a pension fund, tactical factors are probably the least important. The impact of short-term volatility is unlikely to have a significant impact over a time horizon of many years. A one-off political shock, for example, all

too easily captures the public imagination but it will often be forgotten within a few weeks or months, let alone years.

Nevertheless, it is important that currency fund managers have a view on such questions. If, for instance, a political event turns out to be the start of a new trend, then it could have long-term implications. The election of a radical political leader would not necessarily have a significant impact outside of one particular country.

In contrast, the emergence of new political cleavages in many European societies could have a more lasting impact. There is no shortage of these across Europe including Brexit, the gilets jaunes protests in France and a eurosceptic government in Italy. The elections for the European parliament in May could well intensify internal divisions still further.

Nor are tactical factors necessarily to do with politics. Data releases or interest rate moves can also shift exchange rates. But there is a similar challenge in untangling short-term fluctuations from longer-term trends.

From a strategic or longer-term perspective there are several factors to take into account. As is generally the case with currencies there is no simple single answer.

At its baldest, measures of valuation are key. One way to measure this is through purchasing-power parity. For example, assume that it costs €100 to buy a representative basket of goods in the euro-zone while the same basket costs $110 in the US. Then, everything else being equal, the expected exchange rate would be $1.10 to €1.

But, of course, the currency market is dynamic rather than static. If the US economy looks stronger than the euro-zone, which seems to be the case at present, then that could exert a downward pressure on the euro relative to the dollar. For example, Neuberger Berman’s Lanconi argues that the US currently looks better in terms of demographics and employment.

Roger Hallam, the currency chief investment officer at JP Morgan Asset Management, is also relatively bearish on Europe’s recent growth. In his view, this weakness cannot be explained by such factors as the troubles of the auto sector or the yellow vest protests in France. The main driver is the slowdown in world trade – a problem to which the euro-zone, with its large export sector, is particularly vulnerable.

Besides valuation, there are other factors with a strategic bearing on the euro. Lanconi points to two more to be taken into account in a longer-term framework. One is the cost of hedging. So a euro-based investor might decide to hedge against, say, the Swiss franc. However, such a decision would need to take into account the negative interest rates prevalent in Switzerland at present.

Another is the diversification benefits of having holdings in foreign currencies. Clearly it can, in principle, be beneficial from a risk-management perspective to have assets in more than one country. But the exact benefits, or possibly disbenefits, will naturally depend on the particular make-up of each portfolio.

The third ‘bucket’, that of existential risk, has a lower profile than it did during the crisis of 2011-12 but, in the view of many, has not gone away. From this perspective the remaining disparities between the different member states cause at least latent friction within the monetary bloc. For example, real interest rates are significantly higher in Italy than in Germany, despite both being in the euro-zone.

Wood-Collins takes a common view when he says that “in the long run it is difficult to have monetary union without fiscal union”. Others talk of the European project being incomplete.

The same point was recently made by Jens Weidmann, the president of the Deutsche Bundesbank and a member of the ECB’s governing council. At a speech last month in Pretoria he argued that: “You could say that the monetary union has a strong leg and a weak leg. The strong leg from the outset has been the monetary framework which I have already elaborated. The weak leg is the fiscal and economic policy framework, the lack of a genuine economic union.”

However, Adrian Lee, the president and CIO of Adrian Lee & Partners, a specialist currency manager, is more sanguine on the euro’s existential status. He concedes his point is “a bit speculative” but argues that “20 years [from its launch] it’s established as a safe haven”.

There is, of course, no definitive way of saying for sure who is right in this debate. Either fundamental tensions will reassert themselves at some point or they will not. Like most things to do with currencies there is a degree of uncertainty.