8
The fall and fall of interest rates

The fall and fall of interest rates

To understand the current low level of interest rates, it is necessary to see it as the culmination of a trend that goes back to the 1980s. Daniel Ben-Ami explains

• Far from being a recent development, real interest rates have trended downwards since the 1980s.
• Advocates of the secular stagnation hypothesis argue that a combination of demographic factors, widening inequality and stalling technological innovation is responsible.
• In contrast, the ‘Austrian’ school of economics focuses on the keenness of central banks to lower rates in times of trouble and their reluctance to hike them during boom periods.
• In any case the question is so fundamental to gauging investment returns and calculating pension liabilities that it demands further investigation.

There is remarkably little in-depth investigation of the forces that have pushed interest rates to such low levels. The usual perfunctory answer is that central banks have pushed down policy rates. But that simply raises more questions than it answers.

Clearly central banks in the developed world are holding rates low, and engaging in extraordinary monetary policy, but that is only the start of the story. It does not explain why they have felt the need to do so for so long. Nor does it answer the question of why longer-term bond yields, which are not under the direct control of central banks, are also so depressed.

Indeed, some market participants realise that the downward trend in rates goes back decades rather than years. By many estimates they have drifted down from their peak since the early 1980s (see graph). A 2015 working paper by two Bank of England economists estimated that long-term real interest rates across the world had fallen by about 450bps over the previous 30 years. From that perspective the market turmoil of the early 2000s, the 2008-09 global financial crisis and Brexit look like staging posts in an inexorable descent. Extraordinary monetary policy, such as quantitative easing (QE), can also be seen as an extension of this trend.

Nor does falling inflation explain this phenomenon. Even if inflation is stripped out, to calculate inflation-adjusted figures, the trend is still downwards. Of course, the idea of a global interest rate is an abstraction – it is a calculation based on averages rather than something that exists independently – but it still suggests there are fundamental forces at work. 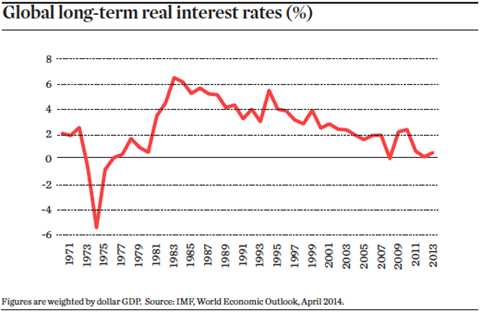 Economists being economists, there are big debates within the profession about the forces pushing rates down. But that is only right and proper given the importance of the subject. The problem, if anything, is that the topic is not discussed more widely.

Although economists disagree on much, there is widespread acceptance that interest rates are associated with rates of economic growth – it is the nature of that link that is often disputed. Real rates tend to be higher in stronger economies and lower in weaker ones. The discussion of low interest rates is therefore closely linked to the debate about low GDP growth.

It should be pointed out that this article is focused on average interest rates across the economy. Topics that more often preoccupy market professionals – such as the appropriate returns for particular sectors or over varying time periods – are covered elsewhere. But the rates discussed here are the foundation on which the rest of the financial markets, including equities as well as bonds, are built.

The two most popular explanations for the downward trend in real rates were outlined in the 2016 annual report from the Bank for International Settlements (BIS), the central bankers’ central bank. Perhaps the most influential, known as the ‘secular stagnation hypothesis’, can be described as broadly Keynesian. It is most closely associated with Larry Summers, the former US Treasury Secretary and Harvard economics professor, although it has many other influential supporters. 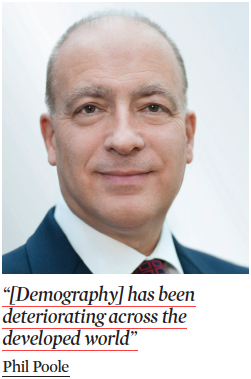 According to the BIS account: “The secular stagnation hypothesis posits that the world has been haunted by a structural deficiency in aggregate demand.” It goes on to argue that: “This deficiency predates the [2008-09] crisis and is driven by a range of deep-seated factors, including population ageing, unequal income distribution and technological advances.”

The alternative hypothesis, advocated by the BIS itself, essentially blames central banks and governments for failing to constrain the supply of money. “The world has been haunted by an inability to restrain financial booms that, once gone wrong, cause long-lasting damage,” it says. This approach is sometimes referred to as ‘Austrian’, after the country where this brand of economics originated, although its contemporary adherents can be found around the world.

The secular stagnation thesis is probably the single most influential view, but it has critics even among those who accept some of its key planks. For example, many investment professionals would reject the implication that the developed economies are in such bad shape and that monetary policy is no longer effective. Many also do not accept the conclusion that more fiscal spending is needed to bolster flagging economies.

In this respect, Bob Baur, the chief global economist at Principal Global Investors, based in Des Moines, Iowa, is a critic. “To me secular stagnation is a very pessimistic view of things,” he says. He believes the slowing of the US economy in particular is largely the result of a reduction in the growth of the work force. In recent years the US labour force has only grown at about 0.5% a year, which is much slower than in the 1960s, 1970s and early 1980s – partly because a lot more women are working. “It’s not stagnation – it’s just the way the world works,” he says. Baur recognises that low productivity growth is a problem but sees it as at least partly the result of mismeasurement. 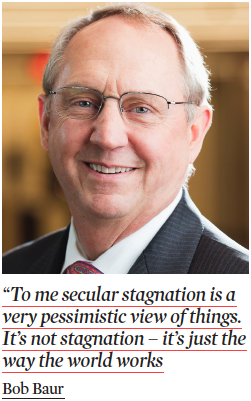 Baur’s criticisms also point to what is arguably another weakness with secular stagnation. It is possible to accept there are problems in the broad areas it refers to – demography, inequality and technological innovation – without buying into the hypothesis. Indeed, the ageing population is perhaps the factor most widely identified by asset managers as pushing down rates over the long term.

Robert Tipp, the chief investment strategist at PGIM, based in Newark, New Jersey, sees the story, particularly in recent years, being one of “a demographic and debt trap”. He talks of “demographic headwinds” – which are hard to reverse in the short term – along with the authorities allowing debt levels to get out of control. Indeed, Tipp can be seen as combining one key plank of the secular stagnation view with a premise of the Austrian school. Although the two sets of ideas can be separated on an abstract theoretical level, they are often combined by practitioners.

Phil Poole, the global head of research at Deutsche Asset & Wealth Management in London, also sees ageing populations as a key driver of falling rates in the advanced economies. “[Demography] has been deteriorating across the developed world,” he says. In addition, he views demography as playing an important role in lower productivity growth. An ageing work force is, all other things being equal, likely to be less productive than a younger one.

The Austrian side of the argument has fewer supporters but it also has a coherent account of why real rates have trended downwards for decades. For Prof Gunther Schnabl, the director of the Institute for Economic Policy at the University of Leipzig, “it’s not the outcome of secular stagnation but of short-term oriented monetary policy”. He argues that central banks have strongly and rapidly cut interest rates in times of crisis but only slowly increased them during boom periods. Such “asymmetric monetary policy” has, in his view, kept interest rates drifting down over the years.

This approach to policymaking is politically rational as it softens the impact of the recession and promotes short-term growth. However, Schnabl argues it can be damaging in the longer term. In effect it acts as an implicit subsidy on both low-return business investment and speculation in financial markets. 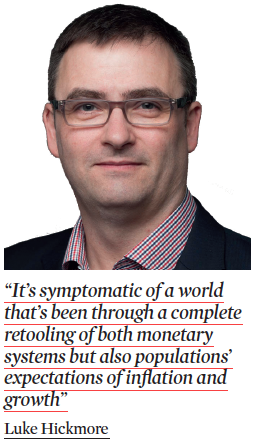 The latter point anticipates some of the criticism of the Austrian approach. Keynesians often argue that if monetary policy were the key problem then inflation would be expected to surge. Yet, contrary to some predictions, consumer price inflation remains sluggish. Schnabl’s response is that inflation has taken off but not in the consumer sphere. It has surged in areas not generally included in the consumer price index such as financial asset prices, property prices and goods consumed by the wealthy.

An alternative criticism would be that the Austrian approach focuses too narrowly on monetary policy. It does not pay due attention, so the critics argue, to broader social factors, such as ageing populations and the dearth of technological innovation. Moreover, it simply sees widening inequality as a symptom of loose monetary policy – pushing up asset prices held by the relatively rich – rather than in a broader context.

Luke Hickmore, a fixed income fund manager at Aberdeen Asset Management, does not define himself as an ‘Austrian’, but he does believe monetary policy is partly responsible for the long-term shift to lower rates. “It’s symptomatic of a world that’s been through a complete retooling of both monetary systems but also populations’ expectations of inflation and growth.” After a period of runaway inflation in the 1970s, there was an emphasis on talking down expectations of growth and inflation. The culmination was a shift to inflation-targeting by central banks which embodied the idea that GDP growth should be kept at less volatile but more sustainable levels.

Lower rates in turn created an incentive for more borrowing, so there was a build-up of debt. Such debt helped boost consumption in the short term, but in the longer term it had to be repaid. It therefore acted as a drag on future growth.

Besides the structural stagnation and Austrian schools, another influential approach could be referred to as the supply-side. That is, rather than focus on the supposed lack of demand in the economy – as Keynesians tend to do – we should look at the problems in creating new supply.

Jesper Koll, the CEO of WisdomTree Japan, an exchange-traded funds provider, is influenced by this approach. The veteran Japan watcher argues that in many respects the developed countries have entered a post-industrial world. In Japan it makes little sense building new car plants because it is already a saturated market. Even when technology advances, such as the move from the Toyota hybrid car to the Tesla electric model, it is only an incremental improvement. In this emphasis on the limits of technological innovation, he is influenced by the seminal work of Prof Robert Gordon of Northwestern University in Chicago.

Koll links the idea of saturated investment to that of a savings glut. Since there are limited outlets for profitable investment, a surplus of uninvested savings simply piles up. With such an oversupply of savings, the rate of interest naturally tends to stay low. There is no need to raise interest rates to encourage investment.

Policymakers make this predicament worse, Koll argues, by pushing interest rates even lower than they need to be. As a result they make what he calls the ‘Gordon trap’ even worse by allowing zombie companies to prevail when they are no longer viable.

The long-term downward trajectory of real interest rates is perhaps the most important trend in the financial markets of recent decades. It has a bearing on all investment returns – since returns of other assets are often measured against a ‘risk-free rate’ offered by government bonds – and has profound consequences for the liabilities of defined benefit pension schemes.

It also raises difficult theoretical questions. These should not be shunned simply because they are hard or abstract. On the contrary, their importance if anything means that they need to be engaged with even more.