IPE at 20: Writing on the walls

A look beyond the longest accepted economic cycles hints at a cycle that could be relevant for pension funds. You may have doubts about whether real, or perceived, cycles are good predictors, but you will not find a better way to gauge what the future holds. At least it will not hurt pension scheme sponsors to think about the scenario this cycle predicts. At best, it will help.

Economists love cycles. The more history repeats itself, the more it becomes predictable. Those who can predict history can become wealthy. Alas, the only well-known economist also known as a good investor was John Maynard Keynes. And yet, maybe the failing of cycles is that they cannot make good predictions about when something is going to happen – timing – even if they correctly say what will eventually happen.

A good example of the consequences of ignoring cycles is the internet bubble, which reached its zenith in 2000 and evolved into the 2001 dotcom crisis. The rise of e-commerce and infinitely better communication and calculation power through and by computers had turned personal computers from expensive toys in 1984 to a tool of radical economic change. Such profound change had happened previously, most recently when steam supplemented human and animal power as a source of energy. That change replaced slaves and horses with powerful machines that brought the economy, and warfare, to levels not previously imagined.

The young spoke of rise of the internet as a new paradigm, arguing that cycles were broken and that trends were new cycles. Even the old applied Moore’s law, albeit while shaking their heads. Moore’s law is the observation made in 1965 by Gordon Moore, co-founder of Intel, that the number of transistors per square inch on integrated circuits had doubled every year since the integrated circuit was invented. Moore predicted that this trend would continue for the foreseeable future. That is nothing short of exponential growth, a trend that leads to infinity very quickly. Even today, Moore’s law holds.

Yet cycles predicted even in 2000 that the “irrational exuberance” – as Fed chairman Alan Greenspan called it – was at bottom a phenomenon of social frenzy, no longer based on reality, that therefore had to end at some point. Cycles could not predict when that would be and heeding them too early would have been at least as costly as reacting too late.

Economists speak of four more-or-less accepted cycles, named after those who formulated them: the Kitchin (3-5 years), Juglar (7-11 years), Kuznetz (15-25 years) and Kondratiev (45-60 years). The Kondratiev cycle illustrates a further problem with cycles: if you want, say, 10 complete cycles to prove statistically that it exists, you need 525 years of data. These figures do not exist.

Keep these caveats in mind while I propose a new cycle, even longer than the Kondratiev. The cycle is based on one of the most successful equations of economic theory, the Cobb-Douglas production function. Without going into the technical aspects, the function says that growth depends on labour (the capacity of work available), capital (the capacity of tools and services available to produce) and technology. You can imagine that machines do not work well without humans, just as humans are not effective without machines. There is a balance between capital and labour that must be maintained, but with leeway. In other words, a country with far too little labour for its capital is a financial centre. A country with far too much labour for its capital is known as a developing country.

“The gargantuan waste of lives of two world wars made labour expensive once more relative to capital. Interbellum and post-war buildings were made from concrete, glass and plastic blocks – all alike, easy to construct and ever higher”

There is evidently no long time series available on the balance between capital and labour. I propose to use a long series of clues available in architecture instead. If buildings are sparsely decorated and simple in form, labour is expensive compared with capital. Building material is relatively abundant. The trick is to find competent people to build. If buildings are richly decorated and complex in form, this means labour is cheap compared with capital. Finding good builders is not a problem, but getting the materials is.

In the classical world, we find high-rising pillared temples, huge stadia, big enough to be used later as city walls, and villas with artistic mosaic floors, all decorated with statutes and large vases – even in such outposts as Britannia. Labour must have been cheap, relative to capital. It makes sense as few tools were available and slavery was normal. 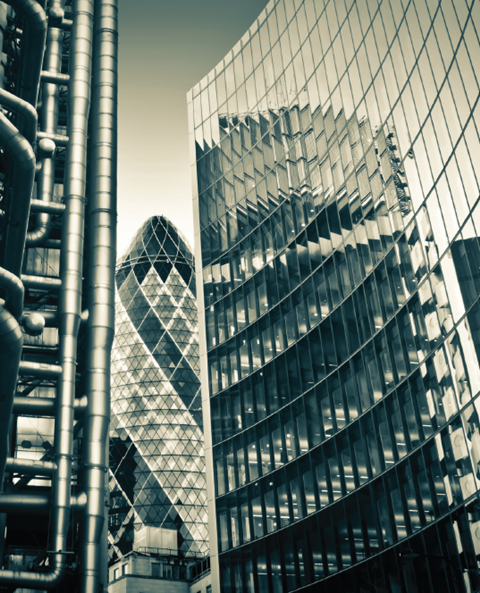 Buildings are still concrete and glass, but they have taken on increasingly difficult-to-build shapes, such as the Gherkin in London (pictured), the Klapschaats in Amsterdam, the Esplanade in Singapore or the Sydney Opera House

By medieval times, churches had become stern, Romanesque affairs, houses were a matter of wattle and daub – indications of expensive labour. That is to be expected in an era of constant warfare and diseases that could kill large segments of the population.

The Renaissance and especially its end phase – the Baroque – brought complex decorations to buildings. Populations seemingly grew faster than capital was accumulating, so labour was cheap and workers poor. By the end of the 18th century, the relationship between labour and capital was so out of kilter that it caused a series of revolutions and social unrest as well as socialism and eventually communism.

In modern times, the relationship reversed. The gargantuan waste of lives of two world wars made labour expensive once more relative to capital. Interbellum and post-war buildings were made from concrete, glass and plastic blocks – all alike, easy to construct and ever higher. Perhaps the turnaround was driven by the financial sector, seemingly able to create capital infinitely. Buildings have taken on increasingly difficult to build shapes, such as the Gherkin in London, the Klapschaats in Amsterdam, the Esplanade in Singapore or the Sydney Opera House. In 2008, the frontiers were reached and surpassed.

The relative price of labour has obvious consequences in the employment market. That is where pension funds come in. Tellingly, the first signs of care for the elderly outside the family came in the Renaissance, when labour was relatively expensive, taking the form of elderly people’s homes and inner courts of subsidised housing for the religious and the servants of the rich. Pension funds as we know them now, with few exceptions, only took off after the first world war, another period of labour scarcity.

With hindsight, the last turning point came between 1980 and 1990. Business became more relaxed about the labour market, viewing a pension fund as a cost item at best, a hindrance to mergers and acquisitions and a danger to its own financial stability, but not as a worthwhile advantage in employment terms. For 30 years now, pension conditions have worsened, whether through shifting risk from capital to labour, otherwise known as shifting from defined benefit to defined contribution, by ‘de-risking’ or by requiring that pension funds, organisations with a social character, act like banks or insurance companies, organisations with a commercial character.

The relative-labour-cost cycle predicts that things will change for pension funds, whether by irresistible economic forces or by immovable revolutionaries. It seems likely that the change will be driven by population ageing and de-greening, making labour scarcer and more expensive in relation to capital. Tightening labour markets will favour the companies with a better pension fund and will kill those that have to settle for second choice employees, or worse. The cycle gives us no information about when this will happen. New technology may postpone the next turning point, while French-revolution-like social upheaval, perhaps driven by the populism of 2016, may bring the turning point closer. However, change is inevitable. Watch architectural fashion for clues about pension funds’ future. The writing will be on the walls.